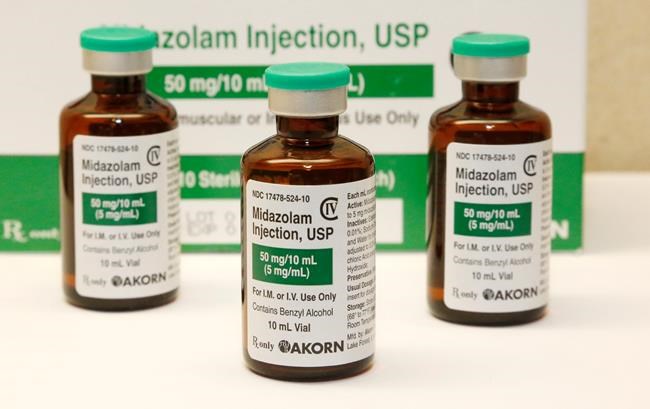 OTTAWA — A Conservative senator is questioning why a drug blamed for botched executions in the United States is being used to provide medical assistance in dying in Canada.

But Sen. Michael MacDonald's attempt to make an "ugly link" between capital punishment and medically assisted death was denounced Thursday by the president of the Canadian Association of MAID Assessors and Providers.

Dr. Stefanie Green called it a "vulgar" tactic to bolster opposition to assisted dying and said there have been no problems with the use of midazolam, a sedative, to help intolerably suffering Canadians end their lives.

MacDonald raised the use of midazolam during Senate debate Wednesday night on Bill C-7, which would expand access to doctor-assisted death to people who are not approaching the natural end of their lives.

He said midazolam has been at the centre of a number of court cases in the U.S. involving death penalty cases that went wrong due to adverse reactions to the drug.

"In 2014, an offender was executed in Ohio using a three-drug protocol, including midazolam," MacDonald told the Senate.

"The individual's death in that case took 24 minutes, including 10 to 15 minutes in which he was said to have been gasping for air."

MacDonald said several states have stopped using midazolam in executions because of such problems. And he cited a 2015 challenge to use of the drug for executions, which failed but in which dissenting U.S. Supreme Court justices concluded that midazolam was "constitutionally insufficient" as a sedative in drug cocktails used in lethal injections.

"So, it appears we know quite a lot about botched executions in the United States, yet we know almost nothing about medically assisted deaths that may have been botched in Canada, even though the overall numbers of MAID deaths that we are talking about in Canada is exponentially higher," he said.

MacDonald raised the issue as part of his explanation for opposing Bill C-7. He argued the government is proceeding too quickly to expand access to assisted death, without first examining how it has been implemented since the procedure was first legalized in Canada in 2016.

"I cannot remember legislation with such a significant set of consequences which has been embarked upon as casually and without adequate scrutiny as does Bill C-7," he said.

The bill is intended to bring the law into compliance with a September 2019 Quebec Superior Court ruling that struck down the law's provision that allowed MAID only for those whose natural death is "reasonably foreseeable."

The court agreed Thursday to extend the deadline for complying to Feb 26, the third extension the federal government has received.

To make any sort of link between capital punishment and the "rigorously safeguarded," compassionate procedure to help individuals end their suffering "is more than apples and oranges," she said in an interview.

"It is offensive to link them in any way … and it is absurd in its content."

Green said midazolam is widely used in a variety of medical procedures all around the world. Based on 20 years of experience with the drug in assisted-death cases in Europe, her organization includes it in its recommended best intravenous protocols.

It is "purposely used" by a majority of medical assistance in dying providers "at the beginning of the procedure to reduce anxiety in a patient if there is any, though there rarely is, and to make them very comfortable and to fall into a light sleep," she said.

It is typically followed by a stronger sedative and then two other drugs to induce death.

The reason it is used as a starter, she said, is to spare families from seeing their loved one instantly put into a deep sleep.

"Is it necessary? No. Is it kinder and gentler? Yes."

"If it was a problem, I would hear about it," she said.

In the event the drug should have the opposite effect, she said the protocol is to immediately administer the more powerful sedative.

MacDonald also told the Senate that there is "very little in the public eye" about the protocols followed for providing medical assistance in dying.

"Perhaps it is because aspects of this practice are unpleasant and disturbing," he speculated.

But Green said the protocols recommended by her association are front and centre on its website, which also includes the protocols developed by each province and territory.

This report by The Canadian Press was first published Dec. 17, 2020.