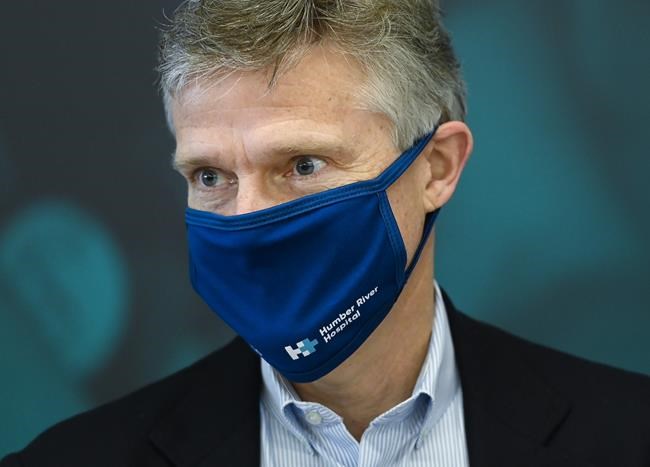 TORONTO — Ontario's finance minister resigned from his cabinet position Thursday, hours after returning from a Caribbean vacation amid a provincewide lockdown.

"At a time when the people of Ontario have sacrificed so much, today’s resignation is a demonstration that our government takes seriously our obligation to hold ourselves to a higher standard," Ford said.

The premier said he has asked Treasury Board President Peter Bethlenfalvy to assume the role of minister of finance and deliver the government's 2021 Budget.

"This appointment will help ensure economic stability in the months ahead, as we support Ontario families, workers and businesses through the COVID-19 pandemic, and as we chart our path to long-term economic recovery," Ford said.

Upon his arrival at Toronto Pearson International Airport on Thursday morning, Phillips told reporters he wanted to stay on as finance minister.

"There's very important work that still needs to be done, and I'd like to continue to be a part of that. But I do understand, people are angry, they deserve to be angry, I have to earn back their confidence," he said.

Ford said Wednesday he first learned about the trip shortly after Phillips arrived in St. Barts. He said he should have asked the finance minister to immediately return to Ontario, but he didn't — calling it a mistake.

Phillips, who will remain a member of the provincial legislature, said Thursday that he regrets his decision.

"It was a significant error in judgment, a dumb, dumb mistake," Phillips said. "Again, I apologize for it, I regret it, but all I can do now is make that apology and move forward."

In a statement released after his resignation Thursday, Phillips again said he regretted his decision to travel over the holidays.

"I once again offer my unreserved apology," he said.

Ontario's new finance minister was sworn in to no fanfare at the provincial legislature Thursday afternoon. He met the province's lieutenant governor for a brief closed-door ceremony that lasted around 20 minutes.

As he left, Bethlenfalvy did not directly address Phillips' resignation or the possible impact it could have on the government's public health messaging.

"We'll have more to say later," he said. "We're all going to work hard on behalf of the people of Ontario."

NDP Leader Andrea Horwath criticized Ford for his role in the leadup to Phillips' resignation.

“Doug Ford knew about Rod Phillips’ trip to St. Barts two weeks ago," she said in a statement. "Not only did Ford not fire him then, he helped him keep the trip a secret. Phillips’ resignation from cabinet today is not because of Phillips’ vacation, it’s because they got caught.”

Liberal Leader Steven Del Duca said Phillips was right to resign for "deceiving Ontarians for weeks" but asked what consequences Ford will face for the situation.

"Doug Ford admittedly knew about Phillips’ vacation for two weeks and did nothing to stop it," he said in a statement. "He shares as much blame as Phillips, and he needs to be held accountable for it."

"There shouldn’t be one rulebook for the Ford government, and a different rulebook for everyone else," he said.

Toronto Mayor John Tory, who has known and been a political ally of Phillips for several decades, called his actions "wrong".

"As finance minister, Mr. Phillips was a good, supportive partner for the City of Toronto but, as he has acknowledged, his recent regrettable actions were wrong and require this level of accountability," Tory said in a statement.

Phillips, 55, entered public life in 2017 when he was acclaimed as the Progressive Conservative candidate for the Ontario riding of Ajax.

He briefly contemplated a run for the leadership of the party after then leader Patrick Brown resigned in early 2018 but instead backed Caroline Mulroney, who eventually lost to Ford.

Phillips won a seat in the legislature later that year and was appointed environment minister as the new government dismantled the previous Liberal's cap-and-trade climate change plan.

He was tasked with rolling out the province's controversial new strategy to reduce greenhouse gas emissions that fall.

Prior to entering politics, Phillips was the CEO of the Ontario Lottery and Gaming Corporation, and chairman of newspaper publisher Postmedia.

This report by The Canadian Press was first published Dec. 31, 2020.