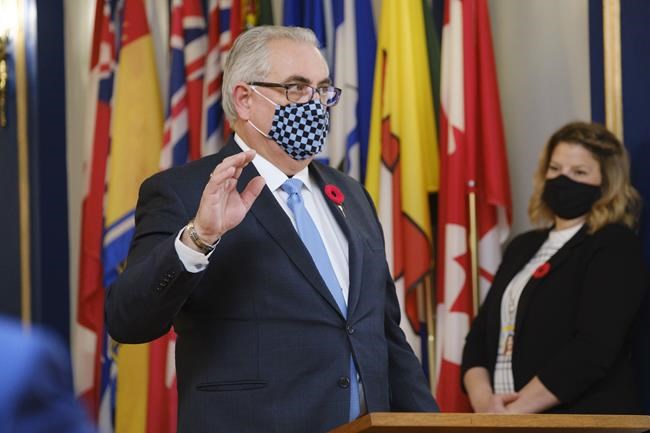 REGINA — A Saskatchewan cabinet minister has apologized for making an "error in judgment" by travelling to California over the holidays, but he gets to keep his job.

Highways Minister Joe Hargrave says in a statement that he plans to return to Canada when he's out of a 14-day quarantine recommended for newcomers in the state on Jan.5.

He previously said he was in Palm Springs for "necessary" personal business — finalizing a home sale and to move his belongings back to Saskatchewan.

“In discussions with the premier, I realize that my decision to travel was an error in judgment at a time when so many people have had to make sacrifices during the pandemic," Hargrave said Thursday.

His statement came shortly after the Opposition NDP said Hargrave should lose his cabinet seat for disregarding the province's advice to residents to stay home due to COVID-19.

"It seems pretty convenient that the financial matter happened in a warm part of the world during vacation season," NDP Leader Ryan Meili told a news conference.

He added that Southern California is dealing with a surge of COVID-19 infections, and questioned whether Hargrave's trip was truly essential, as real estate matters can be handled remotely and movers can be hired.

"To just decide to instead ignore the rules and abuse his power as a minister and decide to do what he felt like doing when everybody else is asked to be making sacrifices — it's just wrong," Meili said.

A spokesman for the Saskatchewan Party government has said Premier Scott Moe was informed of Hargrave's trip before he left on Dec. 22. Hargrave went on the trip with his wife.

Moe has since discussed the issue with Hargrave and he will stay on as minister, said the premier's office.

"The premier does not control what members of cabinet or caucus do in their personal time or what they deem as necessary travel, but expects they follow all public health guidelines and recommendations," Jim Billington, executive director of communications, wrote in an email.

"The premier agrees with the minister’s assessment that his decision to travel was an error in judgment."

Hargrave has said he will self-isolate for another two weeks once back home in Canada.

Moe's office said no other members of his cabinet or caucus have travelled internationally during the holidays.

Ontario's finance minister resigned his cabinet position Thursday, hours after he returned from a Caribbean vacation.

Rod Phillips also called his decision to travel abroad during the pandemic an "error in judgment."

This report by The Canadian Press was first published Dec. 31, 2020