Leaders talk vaccine roll out and Washington’s day of chaos: In The News for Jan. 7 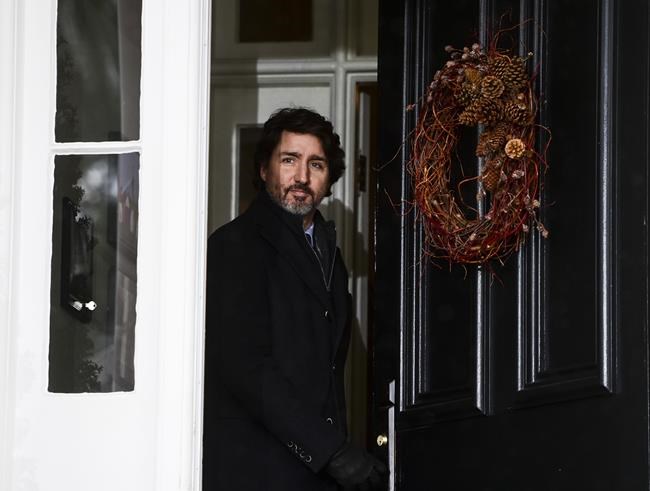 In The News is a roundup of stories from The Canadian Press designed to kickstart your day. Here is what's on the radar of our editors for the morning of Jan. 7 ...

What we are watching in Canada ...

Earlier this week, Trudeau voiced frustration over the pace of getting Canadians inoculated against the novel coronavirus.

As of Tuesday, Canada had received nearly 425,000 doses of the Moderna and Pfizer-BioNTech vaccines — but fewer than 150,000 Canadians had received shots by then.

In his first news conference of the year on Tuesday, Trudeau said he shared the frustrations of Canadians who think the vaccinations should be going faster.

Some provinces acknowledge there have been bumps in the road administering the vaccines, particularly with trying to get the delicate Pfizer product to remote areas.

But premiers, including Ontario's Doug Ford, have said the real concern in the days and weeks ahead will be over Ottawa's ability to get vaccines to the provinces quickly enough.

OTTAWA — Canada's special adviser on the Iranian military's downing of a passenger jet one year ago is rejecting Tehran's offer to pay $150,000 to each of the families of those killed in the tragedy.

Goodale told The Canadian Press the final amount will be subject to negotiations between Iran and Canada and the four other countries whose citizens were killed on the plane.

Goodale was appointed last March to lead Canada's response to the Jan. 8, 2020, shooting-down of Ukrainian International Airlines Flight 752 by Iran's Revolutionary Guard that killed all 176 people on board.

They included 55 Canadian citizens, 30 permanent residents and 53 more travellers bound for Canada as well as citizens of Britain, Afghanistan, Sweden and Ukraine.

Goodale, Prime Minister Justin Trudeau and other government members are expected to meet virtually today with the victims' families and loved ones.

The House and Senate certified the Democrat’s electoral college win early this morning after a violent throng of pro-Donald Trump rioters spent hours Wednesday running rampant through the Capitol.

A woman was fatally shot, windows were bashed and the mob forced shaken lawmakers and aides to flee the building, shielded by Capitol police.

The rampage began shortly after President Trump repeated his unfounded claims of election fraud to thousands of rallying demonstrators he’d invited to Washington. Many then surged to the Capitol after he incited them to go there as lawmakers debated the electoral votes.

American lawmakers are now vowing an investigation into how law enforcement handled Wednesday’s violent breach, questioning whether a lack of preparedness allowed a mob to occupy and vandalize the building.

U.S. Capitol Police, who are charged with protecting Congress, turned to other law enforcement for help with the mob.

But more than six hours after the violence erupted, lawmakers resumed their session.

The assault on the Capitol made some Republicans squeamish about trying to overturn Biden’s win, and challenges were lodged only against Arizona and Pennsylvania. Both efforts lost overwhelmingly.

Trump now says there "will be an orderly transition on January 20th.”

He says in a statement tweeted this morning by his social media director Dan Scavino, “Even though I totally disagree with the outcome of the election, and the facts bear me out, nevertheless there will be an orderly transition on January 20th.”

He adds: “I have always said we would continue our fight to ensure that only legal votes were counted. While this represents the end of the greatest first term in presidential history, it’' only the beginning of our fight to Make America Great Again."

What we are watching in the rest of the world ...

Tear gas and bullets in the U.S. Capitol building. Outrage and condemnation from leaders across the world.

“What is happening is wrong,” New Zealand Prime Minister Jacinda Ardern said in a statement Thursday.

“Democracy — the right of people to exercise a vote, have their voice heard and then have that decision upheld peacefully — should never be undone by a mob.”

The chaotic scenes from the storming of the building at the centre of American democracy by angry supporters of U.S. President Donald Trump are normally associated with countries where popular uprisings topple a hated dictator. The Arab Spring, for instance, or the Velvet Revolution in Czechoslovakia.

But this time it was an attempt by American citizens to stop a peaceful transition to power after a democratic election in a country that many around the world have looked at as a model for democratic governance.

“In such circumstances, it is important that political leaders impress on their followers the need to refrain from violence, as well as to respect democratic processes and the rule of law.”

Several countries, both allies and antagonists of America, issued travel warnings to their citizens. Australians were urged to avoid U.S. protests following what Australian Prime Minister Scott Morrison described as “rather disturbing scenes” in the United States.

"The United States stands for democracy around the world and it is now vital that there should be a peaceful and orderly transfer of power."

"Violence will never succeed in overruling the will of the people," he tweeted. "Democracy in the U.S. must be upheld — and it will be."

Kirsten Hillman, Canada's ambassador to the U.S., also felt compelled to issue a statement, calling for cooler heads to prevail and noting that Canadian Embassy staff were all safely accounted for.

Ottawa said Canadian troops would be heading into a combat mission under U.S. control in southern Afghanistan.

Experts say a fear of needles could be one of the factors that might cause people to avoid getting the COVID-19 vaccine.

Anna Taddio, a professor at the University of Toronto's Leslie Dan faculty of pharmacy, says a fear of needles is one more barrier to a person being comfortable with getting vaccinated.

Just as the safety of the vaccine is being addressed, she says fear of needles should be, too.

Dr. Katie Birnie, an assistant professor in pain medicine at the University of Calgary, says it is important to distinguish between needle fear and phobia.

Some people have a fear of needles but tolerate them, she says, but up to 10 per cent of the population has a such a phobia that it's a mental health issue.

Taddio says there are different ways to address the fear of pain, including the use of a numbing cream and calming language before the procedure, but the phobia requires help from a mental-health expert.

EDMONTON — Premier Jason Kenney's office confirms he is working out of a penthouse known infamously as the "Sky Palace," calling it the best and safest solution due to renovations at the legislature.

Christine Myatt, the premier’s spokeswoman, says the temporary move to the Federal Building was announced in August, existing furniture was used and there were no extraordinary costs.

But NDP Opposition critic Sarah Hoffman calls it a disturbing “doubling down” on entitlement, given that Kenney is now directing from the luxury retreat the fallout of foreign holidays by his United Conservative legislature members during the COVID-19 pandemic.

The scandal over the suite dubbed the "Sky Palace" broke in 2014, as then premier Alison Redford resigned due to travel expenses and trips.

It was discovered that the government was lavishly redecorating the top floor of the government-owned building for Redford, featuring bedrooms, bathrooms, a dining room, lounge, fireplace, powder room, butler's pantry, walk-in closet and room-by-room temperature controls.

This report by The Canadian Press was first published Jan. 7, 2021