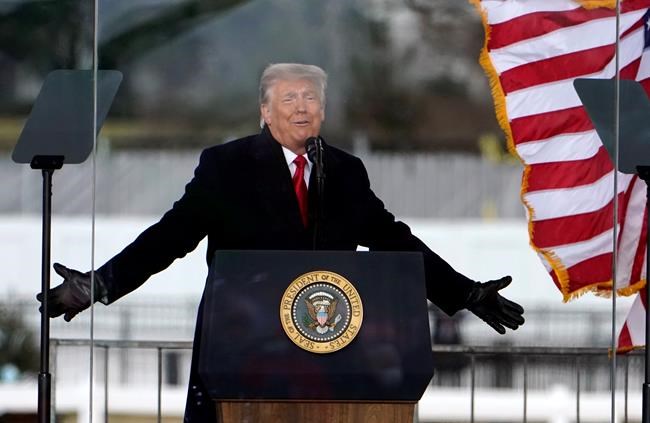 TORONTO — Outgoing U.S. President Donald Trump's stores were taken off-line by Shopify Inc. on Thursday, as the country grappled with the role he played in inciting violence that erupted at the Capitol building the day before.

The Ottawa-based e-commerce company said that it terminated stores affiliated with Trump because his actions contravened Shopify's policies.

"Shopify does not tolerate actions that incite violence," the company said in a statement.

"Based on recent events, we have determined that the actions by President Donald J. Trump violate our acceptable use policy, which prohibits promotion or support of organizations, platforms or people that threaten or condone violence to further a cause."

Trump's campaign did not respond to a request for comment.

When visited on Thursday, both his hotel and branded goods business site trumpstore.com and campaign store shop.donaldjtrump.com generated messages saying "oops something went wrong" and "this store is unavailable."

Shopify's move comes a day after Trump's supporters stormed the Capitol and entered key spaces and offices held by officials who were largely evacuated or ordered to shelter-in-place.

They were emboldened to attack the Capitol as Congress was in the midst of debating objections to Joe Biden's certification as the next president.

It also followed Democrats winning two Senate races in Georgia handing it full control of government when Biden is inaugurated on Jan. 20.

Democrats Jon Ossoff and Raphael Warnock were declared the winners, handing control of the Senate to the Democrats.

Trump released a minute-long video Wednesday on social media, where he told those involved in the Capitol attack that he “loved” them, but they “have to go home now.”

Facebook removed the video and banned him indefinitely from the platform Thursday, while Twitter also took it down but only kept him off its social media site for 12 hours.

Both said they were curtailing Trump's presence on their platforms because he violated their policies.

Shopify's decision to ban Trump comes years after the company's founder Tobi Lutke wrote about the value of free speech in a now-deleted Medium post, where he explained why he was allowing far-right news network Breitbart to continue to use his company's offerings.

"It would be easy to kick off merchants we don’t like, and doing so would actually make our lives significantly easier," he admitted.

Lutke said that if Shopify started "blocking out" voices, it would fall short of its goal to make commerce better for everyone and instead operate a "biased and diminished" platform.

"Products are a form of speech, and free speech must be fiercely protected, even if we disagree with some of the voices," he said.

Melissa and Johnathan Nightingale, co-founders of leadership training company Raw Signal Group, have been turning down speaking opportunities with Shopify since 2017, when Lutke posted those thoughts.

They were tired of founders being willfully ignorant or trying to be neutral about their platforms and thought it was time for Shopify to take a hard stance against homophobic and Nazi content they saw selling in stores using the company's software.

"It's awful because there are people running stores on Shopify who have been demonetized from other platforms, because they use homophobic slurs to abuse journalists," said Johnathan, who previously served as the vice-president of Firefox for Mozilla.

They believe Shopify should have acted sooner to deal with Trump's stores.

"There's a hollowness to doing it two weeks before an administration changes over," said Melissa, who has worked in leadership positions at Wattpad Corp.

She wonders how long it will stick.

"Is this a quick sort of flash in the pan change... or is this meaningful and structural change going forward? I don't know."

This report by The Canadian Press was first published Jan. 7, 2021.

Companies in this story: (TSX:SHOP)