On This Day in Canada’s Political History: Happy BD to the Big M

January 10, 1938, is the birth date of Senator Frank Mahovlich.  And so, it is a great pleasure today to send out a birthday shoutout to a Canadian NHL legend/Hall of Famer who also graced the world of politics.

The son of Croatian immigrants, Frank Mahovlich was born in Timmins, Ontario.  Nicknamed the ‘Big M’ because he was among the larger NHL players of his day, he went on to a storied hockey-playing career, skating for the Leafs, Habs, Detroit and a couple of WHA teams as well.  He beat Bobby Hull to take the Calder Trophy as rookie of the year in 1957, led the Leafs in scoring many years and has been named one of the top 100 NHL players of all time.  He was named to an NHL All-Star Team nine times and was a member of six Stanley Cup-winning teams – four with Toronto and two with the Montreal Canadiens. 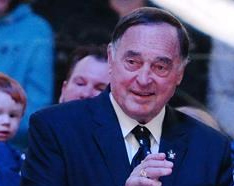 From the 1960-61 season with the Leafs, when he scored 48 goals, through to the 1973-74 season, his final season with the Montreal Canadiens, he averaged a point per game.  His highest single season goal total was 49, a mark he reached in 1968-69 when he played on a line with Red Wings’ greats Gordie Howe and Alex Delvecchio.  He had the pleasure of playing with his younger brother Peter first in Detroit and later in Montreal.   He and Peter both played for Team Canada during the 1972 Summit Series against the Soviet Union.

In 1998,  then-Prime Minister Jean Chretien appointed Mahovlich to the Senate.  One time, during Mahovlich’s senatorial career, I happened to be working away in the main reading room at Library and Archives Canada.  Suddenly, applause broke out and a group of mostly greying historians and researchers stood to honour and cheer the good Senator who was being given a tour of the facility.

In 2003, Canada Post honoured Mahovlich and five other NHL greats on a six-stamp souvenir sheet.  Senator Mahovlich retired from the Senate on this date in 2013 – his 75th birthday.  While Prime Ministers come and go, NHL royalty as personified by a player like Mahovlich – a widely respected ambassador for hockey — never goes away.

Happy birthday to the Big M!