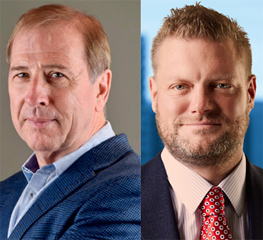 Without a vaccine, this second wave of the pandemic would be unbearable. It’s the light at the end of the tunnel and, thankfully, most of us think we can finally see it. If Ottawa does its part, there should be a payoff at election time. But that’s the tricky part: when is the right time for an election?

One option is the spring, and talk of this is resurfacing, energized in part by a recent Nanos poll that has the Liberals at 40.3 per cent. In this view, Liberals should strike while the iron is hot!

Still, there is that pesky matter of the vaccine. Justin Trudeau is on record saying that anyone who wants a vaccination will be able to get it by the end of September.

In this view, going to the polls during the rollout could look opportunistic, so the safer bet is to wait till it’s over. The main concern is that Liberal support could go south in the meantime.

We’re more optimistic. A recent poll by Ekos Research finds that Canadians like the government’s plan: 63 per cent approve of it and 72 per cent want their shots.

If we look a little deeper, we find something even more interesting. Canadians are learning about their situation – the pandemic, the vaccine, and the challenges around delivery – and, increasingly, we think this means they want to help make the plan work.

This is Canada, so both federal and provincial governments have important roles to play in defeating the pandemic. Typically, Canadians are unclear about such roles and that can be messy. One government often gets blamed for the other one’s mistakes.

Except, this time Canadians seem to be drawing the right distinctions. Ekos reports that Ottawa’s handling of the pandemic gets a national approval rating of 58 per cent – a very respectable number. The regional breakdown shows considerable agreement across the country, with a high of 70 per cent in Atlantic Canada and a low of 50 per cent in some western provinces: 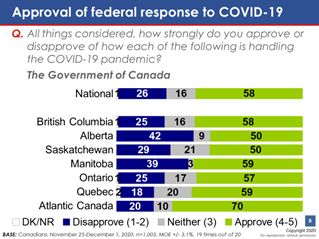 As the next slide shows, there is significantly greater variation in how Canadians view their provincial governments: 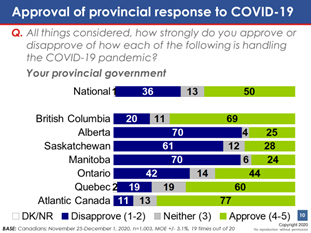 Together, these slides show that Canadians not only distinguish between the two orders of government but are assessing their performance differently. As our third slide shows, this is based on more than impressions. Most, are surprisingly well informed on what is happening around the pandemic: 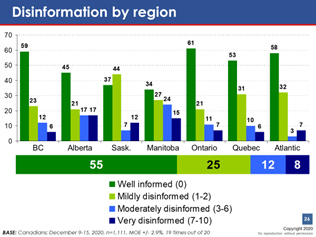 In sum, Canadians don’t just “approve” of the vaccination program. They are deeply concerned about the virus, they support Ottawa’s approach to dealing with it, they trust the vaccine, and they want their shots. After a long and trying year, Canadians just want things to get back to normal and they know that mass vaccination is the only real solution.

However, the last slide also contains some worrying findings about “disinformed” views, especially on the prairies. These views are also comparatively high among lower-income Canadians and members of visible minorities: 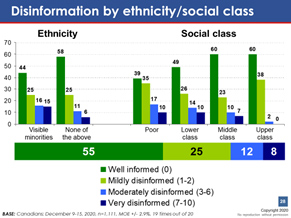 How likely is it that opposition parties could use these groups to undermine support for Ottawa’s plan and drive the Liberals’ polling numbers down?

Canadians’ Focus is on Defeating the Virus

In normal times, opposition parties win support by advancing alternatives of their own, but in the current context, there is little room for that.

The financial programs to support Canadians were road-tested and fine-tuned in the first wave. The systems are in place and the sticker shock is largely gone. The Trudeau government’s task now is to keep the programs running until the vaccinations are done.

The real challenge that lies ahead is to defeat the virus and on this, the vaccine is the only game in town. No one has a better option and, as we’ve seen, most Canadians now get that. Opposition parties that champion strange or anomalous views do so at their peril.

Take Jason Kenney. He tried to convince Albertans that preserving individual freedom was more important than enforcing restrictions to control the virus. A stunning surge of COVID cases followed, and his support quickly plummeted. (See Slide 2 above.)

Or consider Erin O’Toole’s outrage over vaccinating prisoners. Once the public health risks were explained, the issue seemed to dissipate. By raising it, O’Toole has managed only to damage his credibility with the swing voters he is trying to court.

The lesson for federal opposition parties is that Canadians are increasingly focused on defeating the pandemic. They are quickly learning what will help and what will not, and most have little time for partisan nonsense.

Ottawa’s priority now is to ensure an adequate and consistent supply of the vaccine; and in the coming months that is the main thing that Canadians will care about.

While there have been some early issues with supply and logistics, these are being solved. Once they are, getting needles into arms is up to the provinces.

Canadians will expect the federal government to pitch in where it can, but its role here is to be helpful, and to facilitate discussion and learning between the provinces.

Jim Carr’s return to cabinet yesterday as a special representative for the prairies is a clear signal that Trudeau gets this and that the federal government wants to work with these provinces to help get the vaccine to Canadians.

Yesterday’s purchase of another 20 million doses means the stock will be available to speed up delivery, if that is possible. The country might even be close enough to the finish line by June that Trudeau could call a summer election without looking opportunistic. We will see.