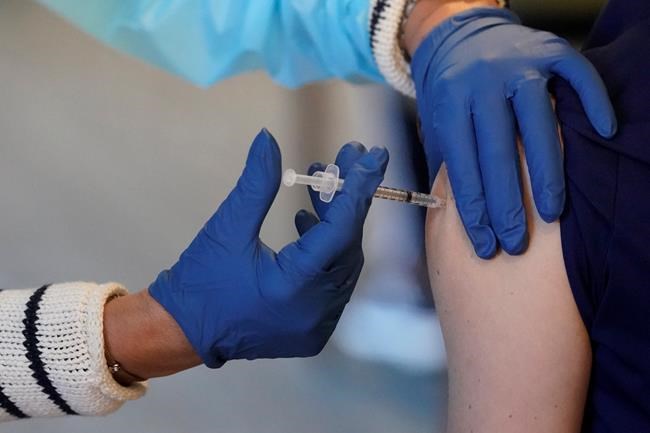 OTTAWA — Canada's national panel of vaccine experts says people eligible to get a COVID-19 vaccine should get both doses on schedule but if vaccine supplies are limited and the pandemic situation is dire, delaying the second dose a few more weeks is acceptable.

The National Advisory Committee on Immunization, or NACI, is also reminding Canadians that even if you're vaccinated you must still follow public health advice to wear masks, keep your distance from others and avoid crowds, because it is still unknown whether someone who has received the shot could still spread the novel coronavirus.

In new recommendations issued late Tuesday, NACI said every effort should be made to follow those dosing schedules but notes there can be exceptions, particularly when vaccine supplies are so hard to come by and the spread of the virus in a given jurisdiction is rapid.

"Model-based studies suggest population health benefits may be greater with a more balanced approach that does not withhold doses during early distribution in order to vaccinate more people as soon as possible, when early supplies of highly efficacious COVID-19 vaccines are constrained," the advice reads.

They said that with other vaccines, waiting longer than recommended to give a second dose hasn't typically reduced the final level of immunity to a disease but the data for the COVID-19 vaccines is still lacking that information.

Most recipients in the Pfizer-BioNTech and Moderna trials got their second doses on schedule but in both cases some didn't get it for as long as 42 days after the first.

The World Health Organization has also suggested that waiting up to six weeks after the first dose is an acceptable compromise. The United Kingdom is delaying second doses up to 12 weeks, and Denmark by six weeks. Germany is among the countries also considering delaying the second dose.

Canada is getting enough vaccine doses to vaccinate the vast majority of Canadians by the fall but the bulk of that won't happen until later in the spring and summer and provinces are warning they're going to run out of doses.

Almost 550,000 doses have now arrived in Canada and about 71 per cent of them injected, with another 380,000 doses scheduled to arrive by the end of the week. About one per cent of the Canadian population has received at least one dose to date.

Clinical trials on the Pfizer-BioNTech and Moderna vaccines both showed the first dose provided some protection against serious illness from COVID-19, but the majority of patients in both trials received a second dose on schedule, leaving very limited data on how long the protection from the first dose lasts.

Dr. Supriya Sharma, Health Canada's chief medical adviser, said last week determining the effectiveness of the vaccines after the first dose is based on a sort of "back-of-the-envelope" calculation and the methods differ depending on when you start measuring.

It can take up to two weeks after a vaccine for the body's full immune response to be in place.

For Moderna, the first dose was effective at preventing serious illness in 80 per cent of patients when the measurement starts the day after the dose is given, and also 92 per cent if starting to measure after two weeks have passed.

The problem with that is that for Pfizer, the majority of patients in the study were given the second dose on day 21, leaving just one week to measure the first dose's effectiveness, and for Moderna, on day 28, leaving just two weeks to measure.

"You're looking at really short time periods, right, when you're counting cases (of COVID-19), said Sharma in an interview with The Canadian Press. "The studies weren't set up to do that. So, you know, it's kind of a back-of-the-envelope calculation."

There is also almost no data to understand how long that first dose remained effective without getting a second one because more than 90 per cent of patients in both vaccine trials got that second dose.

NACI's recommendations say if the second dose is delayed those patients must be followed so more evidence of the impact can be attained.

This report by The Canadian Press was first published Jan. 13, 2021.