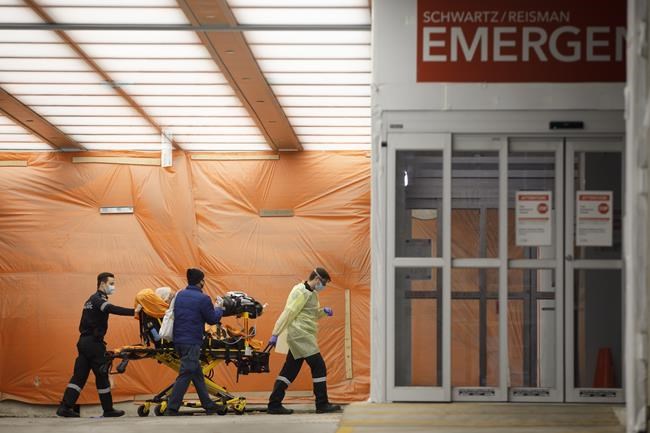 TORONTO — A stay-at-home order went into effect in Ontario on Thursday but the government said police would not have the authority to randomly stop residents on the street to ensure compliance.

The measure, imposed in an effort to bring down soaring rates of COVID-19, means Ontarians are to venture out only for essential purposes such as health-care, food and exercise.

A spokesman for Solicitor General Sylvia Jones said the order doesn't give police the power to enter homes or stop vehicles solely to check if the measure is being followed. Residents travelling to work are also not required to have proof from their boss that they are doing so.

"On its own, being outside is not sufficient evidence of a failure to comply with the stay-at-home order," spokesman Stephen Warner said.

Critics have called the order unclear but Premier Doug Ford has asked residents to use their "best judgment" in deciding whether to go out.

Several police forces said they were still reviewing the details of the measure on Thursday. The province sent police services a memo on enforcing the order but refused to make it public.

A spokesman for the Ontario Association of Chiefs of Police confirmed officers will not be stopping people solely to ask about the stay-at-home order.

"When people understand that our officers are not going to be looking for people who happen to be out like me walking my dog, I think they will then feel a lot better," Joe Couto said.

"Simply getting into their car and going to the grocery store, wondering if they going to see the lights in their back windows is not going to happen."

A spokeswoman for Peel Regional Police said the service planned to respond to complaints about violations of the order but would not be stopping drivers and pedestrians to see where they are going.

"It will be for the most part responding to calls," Const. Sarah Patten said in a statement.

Toronto's police force said officers will focus enforcement efforts on restaurants and businesses that appear to be breaching the rules on closure orders or customer limits, as well as social gatherings.

"Officers can exercise discretion in every situation," Deputy Chief Myron Demkiw said in a statement. "But where there is evidence of non-compliance, officers will be ticketing and issuing summonses for individuals and businesses."

The government issued an emergency alert to cellphones, radios and televisions on Thursday morning telling residents the order was in effect.

The message asked people to only leave their homes for essential purposes. The province has said, however, that there's no set definition for what is "essential" because everyone has their own unique circumstances.

NDP Leader Andrea Horwath called the order a "half-measure" that has confused people.

"We can’t be successful if the Ford government continues to withhold meaningful supports, and instead only offers a stay-at-home order rife with contradictory loopholes and exemptions," she said.

In Toronto, Kristen Bones was at an outdoor skating rink to get some midday exercise on the first day of the order and said she still wasn't clear on the new measure.

“You really don’t know what the restrictions are. It’s kind of confusing to us,” she said.

Adeel Haider, who works from home in Mississauga, Ont., said the new stay-at-home order is “too little too late.”

The guidance on enforcement hasn’t been very clear either and is sometimes contradictory, Haider added.

"We're taking steps to ask our peace officers who have more powers to disperse outside gatherings, to render fines and take action accordingly," he said.

"I'm really hoping that we don't need to do that. I'd rather people take it seriously."

Meanwhile, the government said it planned an inspection blitz of big-box retailers over the weekend to ensure they were complying with public health rules.

Labour Minister Monte McNaughton said 50 inspectors will visit stores in Greater Toronto and Hamilton Area and will, for the first time, be permitted to issue tickets to store patrons.

"Inspectors now will also have greater powers," he said. "We're not trying to punish anyone, but cases are still rising. All of us need to do even better."

McNaughton said the inspectors will have the power to issue tickets of up to $750 to anyone not following public health rules, including store supervisors, workers, and customers.

He said they will focus on ensuring employees and customers are wearing masks, maintaining physical distance and following safety guidelines.

Inspectors will also have the authority to temporarily close a premise and disperse groups of more than five people, he said.

The province's stricter measures and the stay-at-home order were announced on Tuesday, when the government simultaneously declared a 28-day state of emergency, it's second of the pandemic.

That came after grim projections on COVID-19 suggested the health system could be overwhelmed if cases continue to rise at current rates.

Ontario reported 3,326 new cases of COVID-19 on Thursday and 62 more deaths linked to the virus.

Health Minister Christine Elliott said there were 968 new cases in Toronto, 572 in Peel Region and 357 in York Region.

- with files from Liam Casey, Holly McKenzie-Sutter and Denise Paglinawan.

This report by The Canadian Press was first published Jan. 14, 2021.