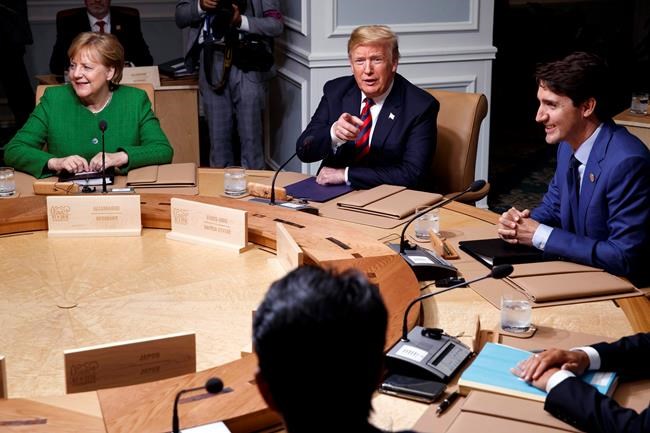 OTTAWA — During his only supper on Canadian soil, Donald Trump told Prime Minister Justin Trudeau and their fellow G7 leaders that their table was incomplete. Come 2020, the American president promised to fix that by inviting Russia's Vladimir Putin to his G7 dinner.

It was June 2018, four years since Russia had been expelled from what was then the G8 after the Kremlin's invasion and annexation of Ukraine's Crimean Peninsula in February 2014.

The Russian occupation of Crimea remains the worst breach of Europe's borders since the Second World War, but on the eve of the Canadian-hosted G7 in Quebec's scenic Charlevoix region, Trump tweeted about wanting to bring Russia back into the fold.

Behind closed doors, Trump pursued it with his fellow leaders, recalled Sen. Peter Boehm, who was in the room then as Trudeau's chief G7 organizer, known as a sherpa.

"Well, you know, we should have President Putin at the table. And when I host, I'm going to invite him," Boehm, in a recent interview, recalled Trump saying.

So went the discussion among the some of the world's most powerful leaders on how to strengthen international co-operation — with the then leader of democratic free world embracing an authoritarian dictator.

As the Trump presidency ends in ignominy, the focus is on his Jan. 6 incitement of the insurrectionist mob that stormed Capitol Hill leaving five dead and numerous more exposed to COVID-19. But his warm embrace of authoritarian strongmen around the world, from Putin to North Korea's Kim Jong Un, has also been a hallmark of the Trump presidency, one that played out behind closed doors during his only trip to Canada.

Trump never paid an official bilateral visit to Canada, but when he visited for the G7 leaders' summit, he openly displayed his fondness for Putin over a feast of duck breast, Canadian lobster and beef filet, mushrooms and spelt fricassee.

Trudeau, Boehm and their fellow Canadians wanted to host an incident-free summit that included Trump, in part to avoid embarrassment but mainly to do no damage to the efforts to renegotiate the North American Free Trade Agreement — which weren't going very well.

Only a week earlier, Trump's commerce secretary imposed punitive sanctions on Canadian steel and aluminum in what Wilbur Ross all but admitted was a negotiation tactic.

"Of course, I was working for (Trudeau), but I thought he did a pretty good job in maintaining the flow, showing due deference and keeping the discussion going" when Trump took the G7 leaders' conversations in unforeseen directions, said Boehm, now the chair of the Senate foreign affairs committee.

That left it to German Chancellor Angela Merkel to challenge Trump on inviting Putin back to the G7.

"This sparked some discussion with a few leaders saying that they did not think this was a very good idea, chief of whom was Angela Merkel," said Boehm.

A day later, the iconic photo of the stern-faced German chancellor at a post-dinner meeting leaning into a seated Trump emerged, but as Boehm recalled there was more to it than the cropped version that Berlin released.

"PM Trudeau is there. I'm in it. There's various versions of that," said Boehm.

"But that was the last discussion point, was on the rules-based international order. And that's where there was a difference with the U.S. delegation. The leaders were involved in trying to bridge that difference, which was eventually done."

The next day, Trump left the summit early and would later withdraw his support for the G7 communiqué, the agreed-upon closing statement. He tweeted insults at Trudeau from Air Force 1 after the prime minister reiterated his past criticism of Trump's steel and aluminum tariffs — arguments the president had already heard.

The explosive finish to the summit obscured the controversy of Trump reaching out to Putin, as Trump jetted off to North Korea for his historic meeting with the reclusive Kim.

Sen. Peter Harder, who was the sherpa for prime ministers Paul Martin and Stephen Harper, in earlier summits said it was "a tragedy in Russian history" to see the country kicked out of the G8 and the blame for that falls squarely on Putin.

Russian "insecurity" led to actions in Crimea "and still continuing actions in Ukraine that are repugnant to democratic values and reflect a more traditional authoritarian-bent Russian history," Harder said in an interview.

Harder was at Harper's side for his first meeting with Putin at the G8 summit in the Russian leader's hometown of St. Petersburg in 2006.

"He's a forceful presence. And he was a proud host," said Harder, the deputy chair of the Senate foreign affairs committee.

In discussions, Putin was seized with the threat of homegrown terrorism because of the carnage he was dealing with in Chechnya and was a spirited participant in discussions on climate change, African debt relief and battling polio and malaria in poor countries, said Harder.

All of that changed when Putin invaded Ukraine in 2014, likely because he was threatened by NATO's accumulation of new members that used to be behind the Iron Curtain, he said.

Putin's thirst to consolidate power within Russia made him a full-fledged authoritarian, but it is still a country that must be seriously reckoned with by Western leaders.

"Russia's global power is not what it once was because its economic strength has been eclipsed by so many markets and countries. But it still is an important nuclear player," said Harder.

That makes the return of steadier hand in the White House under Joe Biden, all the more crucial.

"We've forgotten that nuclear proliferation is an important challenge for our time. The risks of nuclear engagement have not gone away, and they need to be managed regularly," said Harder.

Despite Trump's 2018 bluster in Quebec, his G7 dinner with Putin never happened. Neither the did the American-hosted G7 summit that was scheduled for the summer of 2020. The COVID-19 pandemic, which ravaged the United States under Trump, saw to that.

Despite the fiascos of the 2018 Charlevoix summit, Boehm said he had good working relations with his American counterpart and his team of dedicated public servants.

"There is certainly some scope for rebuilding morale in the U.S. foreign service. That's what I'm hearing. And they might be on track to do that."

This report by The Canadian Press was first published Jan. 18, 2021.