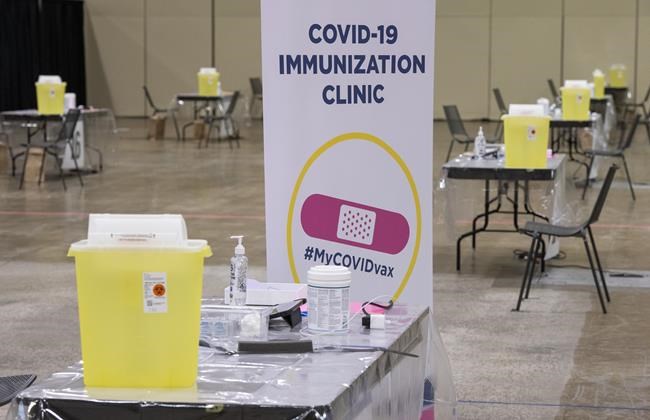 TORONTO — Canadian businesses are grappling with how they'll handle the vaccination of staff and for some, that means allowing workers to get the shot on company time.

At least 35 tech companies in the country, including SkipTheDishes, Borrowell, and FreshBooks, signed a pledge Friday from the Council of Canadian Innovators vowing to let their staff slip out of work to get a jab and promising to provide them with accurate and reliable public health information around vaccination.

"Making this happen is more important than business as usual," the companies said in the pledge.

"We want to send a message to our workforce, to our employees’ families, and to Canada as a whole that … the vaccination effort needs to be a top priority for Canada.

While experts believe mass vaccination will help prevent deaths and could allow for lockdown restrictions to be eased, they say pledges like this one are part of a balancing act for companies.

Laws will likely prevent companies from requiring vaccination, but they feel a sense of civic duty and want to do whatever they can to dispel myths about the shot and protect Canadians, said Richard Leblanc, a professor of governance, law and ethics at York University.

"What you want to do is encourage, educate and communicate, but not unduly influence or force," he said.

Companies, he added, want to do what they can to combat vaccination myths, but have to be careful not to pressure staff with valid objections to the shot.

Pregnant or breastfeeding women, for example, were once advised not to go for the shot by Ontario's ministry of health, but now the province is leaving the decision up to the women.

In some countries, people with allergies and some immune system issues are also being advised to avoid the vaccine.

Canada is still in the early stages of its vaccination plan and only 738,000 doses of the shot have been given to health-care workers and long-term care home residents, but Toronto-based fintech Borrowell was eager to get thinking about vaccination ahead of time.

Andrew Graham, the company's co-founder and chief executive, said he signed CCI's pledge after staff talked about the pandemic, the country's efforts and what they could do to help.

"The sooner we can get a critical mass of people vaccinated, the sooner we're gonna be able to reduce deaths and reduce some of the economic harms, so we're just really, really keen to support that in any way we can," he said.

Borrowell is being careful not to make anyone feel they have to get vaccinated, he said.

Instead, the company is looking at the pledge as a way to make it easier for those who are already willing to get the shot to do so, when they are eligible.

Dr. Nazeem Muhajarine, an epidemiologist and University of Saskatchewan professor specializing in community health, applauded such efforts and said they were the equivalent of "good corporate citizenship."

He hoped other companies will follow the lead of pledge signatories and even add a few extra elements to encourage more vaccination for those willing and eligible.

"Perhaps they could also extend the policy to allow you to take a family member to get a vaccine or to step in and help your spouse or someone who is the caregiver to children, so they have time off and go to get a vaccine."