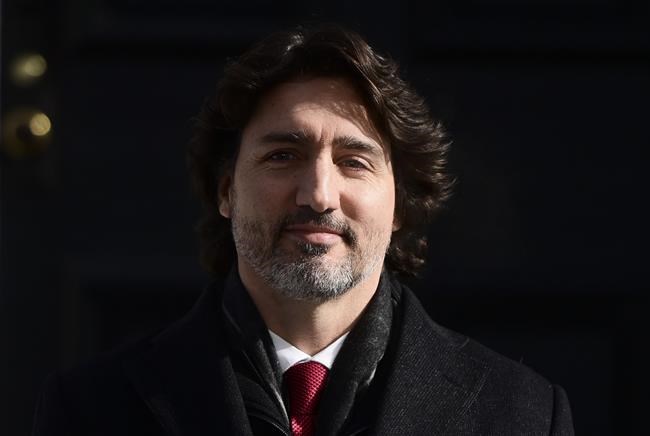 OTTAWA — Tighter border controls will come into effect Feb. 22, the prime minister said Friday, not to punish travellers but to try to keep everyone safe.

Forcing most who land at airports into a mandatory three-day hotel quarantine — at their own expense — and requiring multiple COVID-19 tests is meant to help prevent new and more transmissible variants of COVID-19 from entering the country, Prime Minister Justin Trudeau said.

Nobody wants a third wave to start, Trudeau said at a news conference outside his Rideau Cottage home.

"And keeping Canadians safe from the virus is discouraging all non-essential travel and ensuring that if people do have to travel, they're doing the things that we can be certain are going to prevent the virus from spreading further in Canada, particularly given new variants."

Currently, one per cent of the total cases of COVID-19 in Canada are explicitly linked to travel outside the country, and a further 0.8 per cent from contact with a traveller.

But with new variants of the virus sweeping the globe, and Canadians ignoring pleas to stay home and travelling south for winter, pressure has been building for the government to do more to stop that number from climbing.

The government had announced the plan for the new border controls last month but more details on how they will work, and when they'll begin, were laid out Friday.

Incoming travellers will need tests upon arrival, and another one towards the end of their quarantine, while those arriving by air will have to wait out the first part of that period in a hotel until that first test comes back.

Most of the new measures won't come into effect for another 10 days, and details are still missing on certain pieces, like who will be exempt, or how long the new rules will last.

With some public health officials warning more contagious variants of the virus are beginning to proliferate, Public Safety Minister Bill Blair defended the time it has taken to roll out the measures, and the fact they won't be implemented for several more days.

He said the government wanted to give Canadians abroad time to make arrangements, and make sure that officials in charge of enforcement have what they need as well.

Since the intention to roll out the new controls was announced, travel has dropped even below what it was, he said.

"I think people are getting the message, and it's not just the message that there will be consequences and challenges that they may face and even greater costs as a result of that non-essential discretionary travel," Blair said.

"But I think the message is also becoming quite clear that now is not the time."

The number of Canadians returning via the land border was down 91.4 per cent last month, compared to January 2020. The number of U.S. travellers dropped by 93.3 per cent.

At airports using electronic kiosks tracking arrivals, the number of non-residents arriving dropped 94.7 per cent in January when compared to last year.

The agency noted "the number of Canadian residents returning from abroad via these same airports appeared to increase steadily toward the end of the month."

As part of the new border controls, major Canadian airlines have also cancelled flights to some popular winter holiday destinations.

Some had speculated travellers would seek an end-run by driving to the U.S., flying south, and then driving back into Canada after.

But officials said Friday a new requirement that those arriving at the land border must have a negative COVID-19 test taken in the U.S. within 72 hours of their arrival is designed to blunt that option.

Slightly different control approaches are being taken at the land and air entry points.

While air travellers have to go into hotels, land travellers don't. Among the reasons: international flights are being funnelled to only four airports, but there are over 100 land border crossings, Blair pointed out Friday.

On-site testing will also be impossible at all those crossings, so while the government can do that at airports, at many land borders, travellers will be given kits to take home.

Demographics is another factor.

Blair said Friday only about five per cent of those who arrive at land border crossings are subject to quarantine requirements, with the rest deemed essential workers. At airports, the vast majority of incoming travellers do have to go into quarantine, he said.

Officials declined to specify Friday when the measures will expire, or what metrics the government will use to determine they are no longer necessary. Details on exemptions will be released in the coming days, they said.

Among them, those travelling for family reunification, compassionate reasons or for non-elective medical procedures.

"When it comes to essential travel, Canadians deserve care and compassion," she said in a statement.

This report by The Canadian Press was first published Feb. 12, 2021.