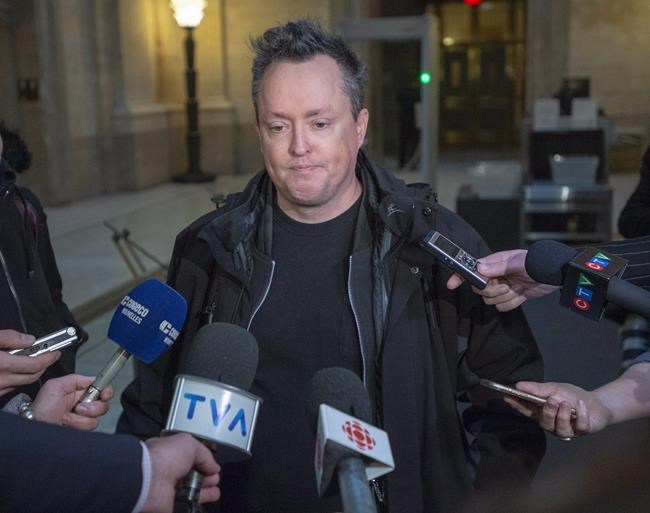 OTTAWA — The Supreme Court of Canada heard an appeal Monday from comedian Mike Ward, who was found by a lower court to have discriminated against a disabled singer in one of his routines.

Ward's lawyer told the nine judges that Canadians don't have a right not to be offended, and making fun of someone doesn't take away their rights.

The lawyer for singer Jeremy Gabriel — who was awarded $35,000 by a rights tribunal — said Ward's joke went too far and had long-lasting consequence's on the disabled man's life.

The nine justices took the case under deliberation at the end of the hearing.

Lawyer Julius Grey argued Monday that his client's joke about Gabriel — part of the comedian's routine between 2010 and 2013 — targeted sacred cows in society as opposed to the singer's disability. "There is no right not to be offended," Grey said. "To insult someone doesn't deprive that person of a service or of a right."

A 2016 Quebec human rights tribunal ruling had ordered Ward to pay $35,000 in moral and punitive damages to Gabriel, who has Treacher Collins syndrome, a congenital disorder characterized by skull and facial deformities. Gabriel became a celebrity in Quebec after he sang with Celine Dion and for the Pope.

In his act, Ward joked that he had thought Gabriel's illness was terminal and people were only nice to him because he would soon die. Ward then joked that after he realized the child was not dying, he tried to drown him.

The Quebec Court of Appeal ruled in a 2-1 decision in November 2019 that Ward's comments compromised the young performer's right to the safeguarding of his dignity and could not be justified, even in a society where freedom of expression is valued.

Grey told the Supreme Court, "one could argue that Mike Ward provided equality for Jeremy (Gabriel) by treating him in the same way as other sacred cows." The comment drew a response from Justice Russell Brown.

Justice Sheilah Martin also reacted to Grey's comments, stating: "We’re talking about somebody saying that they tried to drown a 13-year-old child that has a physical disability."

Christopher Bredt, a lawyer for the Canadian Civil Liberties Association, an intervener in the case arguing on the side of freedom of expression, told the court that "a lot of comedy is in bad taste."

But Stephanie Fournier, a lawyer representing Quebec's human rights tribunal, said the case wasn't about morality or taste but about discrimination. She said the joke attacked Gabriel's human dignity. She told the court that Ward's comedy routine was widely available online, which she said was a "major element" in the case, because the videos were accessible to Gabriel's peers at school.

"He was mocked and intimidated at school .... He also had to deal with the stress of his parents. Therefore, there were enormous consequences for (Gabriel)," Fournier said.

Ward's case has received a lot of attention in the province because of its implications for artistic freedom and the place of human rights tribunals to adjudicate issues of freedom of expression.

Another intervener in the case before the Supreme Court is an association representing professionals in Quebec's comedy industry, l'Association des professionnels de l’industrie de l’humour.

The group's lawyer, Walid Hijazi, said Monday that the industry is worried about the possibility of Ward losing the case. He warned of  a possible "chilling effect" that would lead to self-censorship among comedians.

This report by The Canadian Press was first published Feb. 15, 2021.