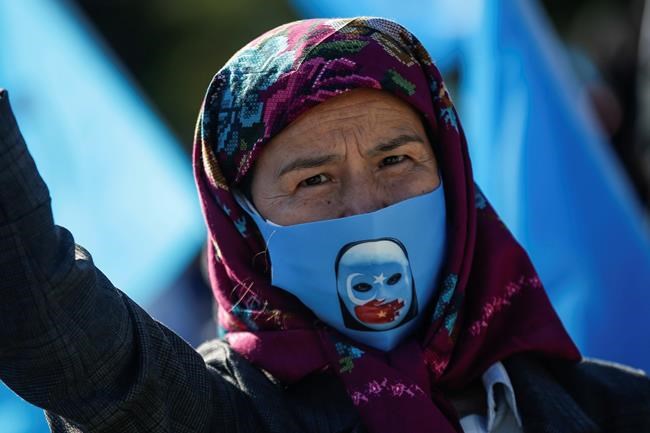 OTTAWA — The Conservatives called Thursday for the House of Commons to formally declare crimes against minority Uighur Muslims in China a genocide.

The move is the latest by the Tories to ratchet up pressure on the Liberal government to take action in response to the situation in China's Xinjiang province.

The motion is non-binding on the government nor does it lay out what any next steps ought to be. A vote is expected Monday.

Ahead of the debate Thursday, Conservative Leader Erin O'Toole said a signal must be sent to the Chinese regime.

"On a matter like genocide, Canada needs to send a clear and unequivocal signal that we will stand up for human rights and the dignity of human rights, even if it means sacrificing some economic opportunity," he said.

"Our values are not for sale."

International legal experts and human rights advocates have been amassing documentation for nearly the last decade on the systematic persecution of Uighur Muslims in China.

The Chinese government has been accused of mass surveillance and incarceration of thousands of Uighurs, forcing them into labour camps for the purposes of indoctrinating the mostly-Muslim minority into mainstream Chinese society.

Reports have also emerged of efforts to forcibly reduce the growth of the population by sterilizing women and forcing them to undergo abortions.

Taken together, a committee of MPs concluded in a report last year, "the actions of the Chinese Communist Party constitute genocide as laid out in the Genocide Convention."

The Chinese government has consistently denied any wrongdoing, disputing international criticism and claiming that the camps they are running are voluntary job and language training efforts.

The Conservatives, as well as others, have called for sanctions on Chinese officials involved in perpetrating the abuses, and in recent weeks, calls have also grown louder for countries to boycott the 2022 Olympics in Beijing or for the event to be moved.

"It is time for the government to play to the best tradition of this country, recognize this genocide and take commensurate action to stop it," he said.

While the Liberals have voiced repeated concerns about the rights violations, they have stopped short of using the term "genocide."

The prime minister recently said the word is "extremely loaded" and must be used with caution, and he and other senior cabinet ministers have said an official investigation must be launched, a response they repeated during the debate Thursday as well.

"Regardless of whether that access is provided, the international community has to work together in order to investigate the egregious human rights abuses taking place in Xinjiang," Foreign Affairs Minister Marc Garneau said.

"It is clear from the available evidence that serious and credible human rights violations are occurring in Xinjiang. The nature and scale of these abuses are alarming."

The Conservatives have pegged their motion to the fact that officials within the current, Democrat, U.S. administration and the previous Republican one have called the abuses genocide, and it has been the policy of the Canadian government to act in concert with allies.

The House ought to therefore, the motion says, "recognize that a genocide is currently being carried out by the People's Republic of China against Uighurs and other Turkic Muslims, and call on the government to officially adopt this position."

The New Democrats said they will support the motion. MP Jack Harris told the Commons while the temptation may be to look at the motion as a political manoeuvre by the Tories to highlight the Liberals' weakness on China, there is more at stake.

"It is incumbent upon us to follow and support this motion because it calls out the practices of China for what they are, which are included in the definition of genocide under the convention against genocide," he said.

"Action needs to be taken. Hopefully, the government, by adopting this motion, will also encourage other nations to do the same and continue to put pressure on China to end those practices and make sure they are not continued either in China or elsewhere."

The Chinese government has retaliated against those who've sought to expose abuses against Uighurs.

After a report by the BBC on the rape and torture of women, the broadcaster was tossed off the air in China.

China also levied sanctions against U.S. officials in response to a similar move by the American government on their own.

Last year, the Liberals' then-foreign affairs minister did warn that tough talk on China could be met by further consequences for Michael Spavor and Michael Kovrig, two Canadians who have been detained by the Chinese government for 800 days.

The "two Michaels" were picked up just days after the RCMP arrested Chinese high-tech executive Meng Wanzhou on a U.S. extradition warrant.

Garneau referred to their plight during the debate on Thursday, saying his top priority is to secure the men's freedom.

"These men have been detained for more than two years now, two years that have been stolen from them, their families and their loved ones. They must be brought home."

This report by The Canadian Press was first published Feb. 18, 2021.