It was on this date in 1994 that legendary Finance Minister Paul Martin delivered his very first budget speech in the House of Commons.  While that was important enough for the new Chretien government and Mr. Martin, I remember it for uniquely different reasons.  It was, after all, on that date that I first met Mr. Martin’s Aunt Lucille.

I was a rookie reporter back then, working at the Pembroke Observer in Pembroke, Ontario.  When I was tasked by my editors with writing a budget day story, I thought of Paul Martin Sr.’s memoirs and his descriptions of his hometown of Pembroke.  His three sisters all still lived-in town in 1994 so I phoned them all, asking if I might be able to watch the Budget Speech with them as their nephew delivered his address.

Two of the aunts could not be reached but Aunt Lucille answered her phone.  She quickly agreed and she and I sat in her apartment and watched the budget address on television.  And she also proudly showed me the bed her nephew – she called him “Little Paul” – used to sleep in when he stayed, as a boy, in Pembroke.  Afterwards I wrote up my story for the Observer. And, I’ve never forgotten the headline my editors chose for the front-page story I wrote: “Aunt praises ‘Little Paul’s’ Budget.”

My friend Dave Stephens of CBC Radio Ottawa called Aunt Lucille after reading my story.  Dave gently asked the Finance Minister’s proud aunt what she would say to those in Ottawa who might, after all, disagree with some or all of her nephew’s budget.  “You tell them,” she said, “that if they criticize Little Paul, I’ll go down to Parliament Hill and shoot them!”  Yup, she was an Ottawa Valley girl!

More than 20-years later, in 2017, I returned to Pembroke when the City of Pembroke declared it “Paul Martin Sr. Day,” and Algonquin College awarded a posthumous diploma to Mr. Martin Sr., accepted at convocation by his son, the Rt. Hon. Paul Martin Jr.

It was a wonderful day.  And I was quietly proud that at an event at the local museum, the staff had put on display my article from decades before about watching the budget speech with Aunt Lucille.  The former Prime Minister did too and I treasure, and always will, the picture of he and I – on Paul Martin Sr. Day in Pembroke – holding the article I prepared about Aunt Lucille. 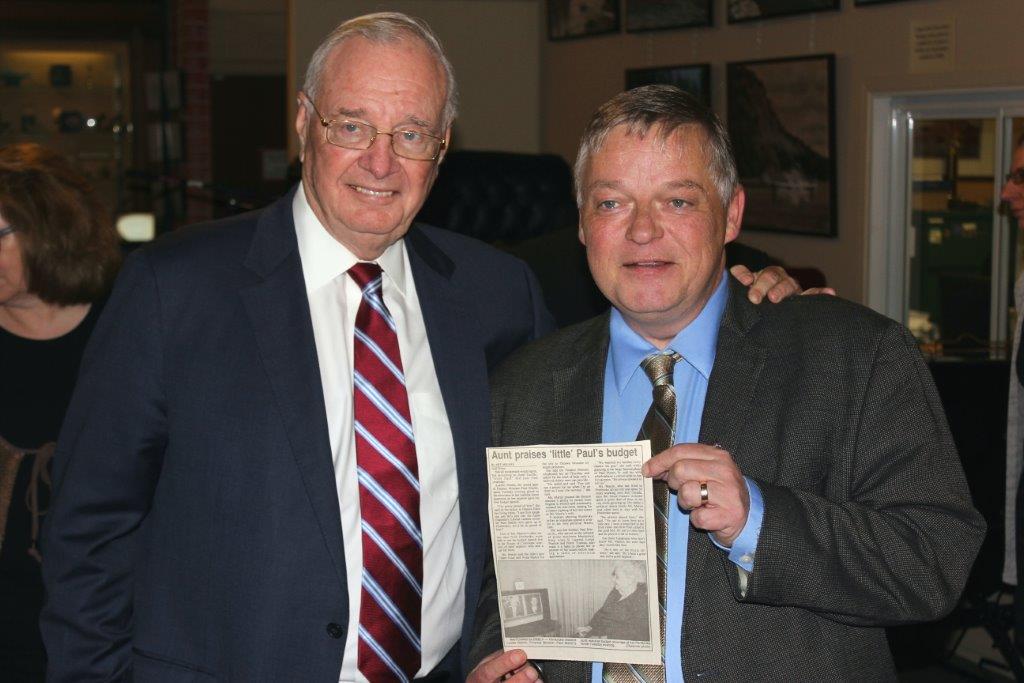