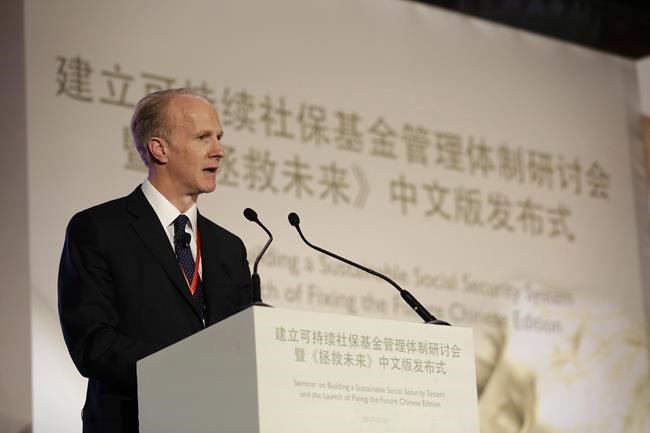 TORONTO — The head of the fund managing Canada Pension Plan investments is the latest high-profile Canadian to come under fire for behaviour during the pandemic after he travelled outside the country and received a COVID-19 vaccination despite a government advisory against any non-essential travel.

Mark Machin resigned his position as president and CEO of the Canada Pension Plan Investment Board after disclosing in a memo to staff that he travelled to the United Arab Emirates, where he received a COVID-19 vaccination.

In the memo viewed by The Canadian Press and sent to CPP Investments staff Thursday evening, Machin said that he remains in Dubai with his partner "for many reasons, some of which are deeply personal" and that he followed all travel protocols related to his job.

"This was a very personal trip and was undertaken after careful consideration and consultation," the memo reads.

CPP Investments declined to specify why Machin travelled or whether the board had approved the trip in advance as part of the consultation process.

In Friday statements, CPP Investments said the incident "unfolded very quickly" and resulted in the board appointment of John Graham as CEO.

"The board will want to reflect on these events, carefully. That’s to be expected," wrote spokesperson Michel Leduc in an email to The Canadian Press.

The federal government's advisory asking Canadians to avoid all non-essential travel outside the country has been in place for almost a year. This month, Ottawa implemented stricter quarantine measures for those returning from international destinations.

The advisories and measures, however, have not stopped several prominent Canadians from heading abroad or making special trips to secure a vaccine ahead of schedule.

They were ticketed for violating the territory's Civil Emergency Measures Act, which carries fines of up to $1,000, plus fees.

Incidents such as these have led companies to create policies that require board permission for executives to travel or even removing to locations beyond corporate headquarters, said Richard Leblanc, a professor of governance, law and ethics at York University.

Machin alluded to CPP Investments policies in his message to staff but the fund did not respond to a question about its policies around executive travel.

Executives are closely associated with the brand of an organization even when they're not at work, so Leblanc said they have to manage reputational risk for the company and its board of directors at all times.

"You shouldn't have to say to a CEO, 'We can't jump the queue (for the vaccine),' but certainly, you need to come to the board when you have any non-essential travel requests," he said.

"That's not inappropriate because ... you have a succession issue if you have to fire your current CEO and boards don't want to get caught flat-footed."

Machin's compensation for the 2020 fiscal year was $5.3 million, not including pension and standard benefits, CPP Investments disclosed in its annual report.

The move to appoint Graham, previously CPP Investment's global head of credit investments, as chief executive — was made swiftly and on a permanent basis, which Leblanc said shows the fund was well-prepared.

What Machin, who is in his mid-fifties, did isn't illegal, but is "troubling" because Canada is focusing on vaccinating the most elderly and at risk people first, added Leblanc.

The UAE is one of the world's top leaders in vaccination administration, trailed only by Israel, said the University of Oxford-backed Our World In Data portal.

The UAE's cumulative COVID-19 vaccination rate is about 59 out of every 100 people, according to the most recent figures. The comparable rate in Canada is 4.5 in 100.

There doesn't appear to be a compelling reason for Machin to get the vaccine early, said Leblanc.

"In other words, he's not a front-line worker, he doesn't appear to be at risk."

Also, there are plenty of recent examples of the professional troubles that can result from travelling amid a pandemic that should have acted as a deterrent, said Leblanc.

The former CEO of the London Health Sciences Centre, for example, is now embroiled in litigation after his travel to the U.S. prompted the hospital to terminate his contract.

Former Ontario finance minister Rod Phillips faced a storm of criticism when he took a personal trip to St. Barts in December and eventually resigned from his post.

A spokeswoman for Finance Minister Chrystia Freeland said that while CPPIB is an independent organization, the Machin revelation is "very troubling."

"The federal government has been clear with Canadians that now is not the time to travel abroad," Katherine Cuplinskas said in an emailed statement.

"We were not made aware of this travel and further questions should be directed to the CPPIB on this matter."

CPP Investments, which had $475.7 billion in assets under management as of Dec. 31, invests money on behalf of retired and active employees covered by the Canada Pension Plan.

This report by The Canadian Press was first published Feb. 26, 2021.