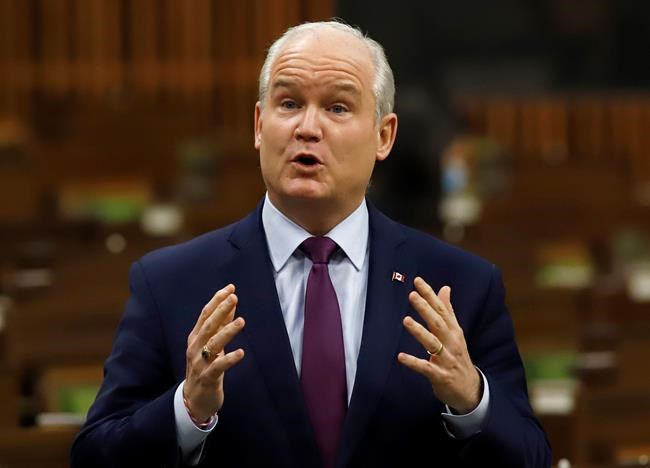 OTTAWA — Conservative Leader Erin O'Toole spent $3.69 million on his campaign to win the leadership of his party last year.

But having raised more than $3.7 million, he ended the race with a small surplus, according to a final campaign return submitted to Elections Canada.

While all leadership candidates for political parties submit reports on how much they've raised in their campaigns, how much they spent isn't required to be disclosed until six months after the race ends.

The Conservatives marked that milestone this week, but two of the final four candidates have received extensions.

Leslyn Lewis, who finished third in the race, spent $2.2 million and also ended with a small surplus.

Candidates were allowed to spend up to $5 million.

MacKay has said he finished the campaign with around $1 million in debt, and is negotiating with vendors and holding fundraisers to try to whittle it down.

He has since left politics, though briefly considered running for election as an MP in the next general election. He's now living in his home province of Nova Scotia.

Sloan, an Ontario MP, has said he has no debt.

Since the race ended, he has been kicked out of the Conservative caucus for what O'Toole called a "pattern of destructive behaviour" linked to explosive comments he's made on a variety of subjects. He can't run under the party's banner in the next election and it's unclear if he'll try to seek election as an Independent or potentially as a member of another party.

Lewis is set to run for the Conservatives in the next election, in the longtime Conservative riding of Haldimand-Norfolk.

She made history in the leadership race as the first Black woman to run for the job.

She had entered as a relative unknown to the party's grassroots, but her strong third-place finish has cemented her position as a potential star in the party.

O'Toole said as much late Thursday night, when he appeared a virtual event with her to mark Black history month.

"I know she's going to help us grow this conservative movement and earn the trust of more and more Canadians, including more members of the Black community from coast to coast that we need to reach out to and build trust," he said.

The event was billed as a conversation with O'Toole and featured opening remarks by Lewis and B.C. Tory MP Kenny Chiu.

The conversation itself took place between O'Toole and Tory MP Richard Bragdon, who is white, using questions that were framed as having been submitted by others on subjects such as how O'Toole will reach out to Black Canadians and what he'll do to address some of the policy questions pertinent to them.

Bragdon was one of seven current Conservative MPs who endorsed Lewis during the campaign, most aligned with the socially conservative wing of the party.

Lewis' relative success in the leadership contest came thanks to her ability to gain a strong following in that cohort of party members.

Many of her backers went on to choose O'Toole as their second or third option in the ranked ballot the party uses, ultimately handing him the win.

She made it clear to O'Toole Thursday night that she remains a champion of those voices.

"When the base has concerns I do take it to him and I say these are their concerns," she said.

This report by The Canadian Press was first published Feb. 26, 2021.