U.S. courts would take ‘many years’ to resolve Line 5 dispute with Michigan: Enbridge 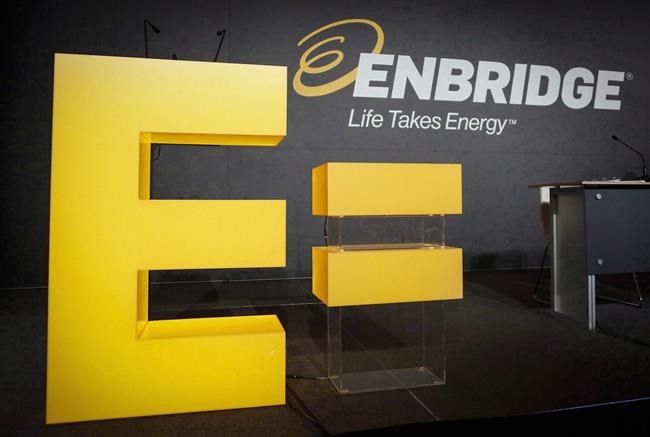 WASHINGTON — Courts in the United States would take "many, many years" to resolve the battle between Canada and Michigan over Line 5, the pipeline's operator told MPs Tuesday as he pleaded for a negotiated solution to the dispute.

Shutting down the cross-border pipeline would trigger a major jobs and energy crisis in both countries and hamstring collective efforts to confront climate change, Enbridge Inc. executive vice-president Vern Yu told a House of Commons committee.

"The stakes could not be higher," Yu testified before the special committee examining the economic relationship between Canada and the U.S.

"The shutdown of the pipeline could cause great economic harm to citizens both in the United States and Canada."

Line 5, which runs through Michigan from the Wisconsin city of Superior to Sarnia, Ont., crosses the Great Lakes beneath the environmentally sensitive Straits of Mackinac, which link Lake Michigan to Lake Huron.

Enbridge wants to build a tunnel underneath the straits to house an upgraded version of the dual pipeline — a project Michigan has already approved — but needs the existing line to continue to operate in the meantime.

Michigan Gov. Gretchen Whitmer has revoked the 1953 easement that has allowed the pipeline to operate without incident for more than 65 years, accusing Enbridge of violating the terms of the agreement. She wants the line shut down by mid-May.

Enbridge is fighting that decision in Federal Court, but if that remains their only recourse, the fallout could be severe, Yu warned.

"We believe there will be reviews at multiple levels at the U.S. federal courts, and that this review will take many, many years," he said.

"It's essential that we try to come up with a mediated and negotiated diplomatic solution that takes this out of the hands of the court and provides a reasonable outcome for everyone involved."

Yu, who runs the Calgary company's liquid pipeline division, was quick to note that Enbridge doesn't see any way in which a U.S. court would grant Whitmer's request for an injunction shutting down Line 5.

A federal judge in Grand Rapids, Mich., is currently ruminating on whether or not the case belongs in state court. A hearing is scheduled for May 12.

Yu said Enbridge has asked the federal government in Ottawa to support its argument that the case should be heard in Federal Court, given that interstate and international pipelines are a national issue.

"Having said all that, obviously we would like to continue to work with the state, because we believe the pipeline is critical for the entire Great Lakes region."

Michigan has refused to concede that the state's own experts have concluded there are no clear alternatives to the pipeline, he wrote to the governor in a letter earlier this year.

"It also fails to account for the significant adverse social and economic impacts that will result from closure."

Line 5 has emerged as the newest flashpoint in Canada-U.S. relations just two months after President Joe Biden cancelled the Keystone XL expansion project, which he did with the stroke of a pen on his first day in the White House.

It just goes to show that friendly bilateral ties between the two countries ought never be taken for granted, said Maryscott Greenwood, chief executive of the Canadian American Business Council.

"While Canada-U.S. relations are pretty sound and we enjoy all sorts of historical advantages, our business is not conducted to a soothing background chorus of 'Kumbaya,'" Greenwood told the committee.

Canada would do well to maintain the "war footing" it adopted during the Trump era and focus its diplomatic efforts on defending U.S. economic interests just as much as Canadian ones, she said.

Regulatory co-operation, a co-ordinated reopening of the shared border and collaboration on personal protective equipment and COVID-19 vaccine supply are all issues waiting in the wings.

"Rather than competing, we have to co-operate. That's what's in the economic interest of our citizens," Greenwood said.

"We cannot allow ourselves to be lulled into suddenly thinking everything will be fine. Gov. Whitmer has provided a wake-up call."

Mark Agnew and Aaron Henry of the Canadian Chamber of Commerce also testified Tuesday, laying out in stark terms the economic and potential environmental consequences of a shutdown.

Cutting off the pipeline, which moves some 540,000 barrels of fossil fuels a day through Michigan, would cost $65 billion in direct revenue and $28 billion of indirect revenue in annual trade, warned Henry, the chamber's senior director of natural resources.

It delivers more than half the state's propane demand, supports 29,000 jobs in Sarnia, Ont., alone, and replacing its capacity would take 800 rail cars or 2,000 trucks a day, he added.

"There is no alternative to Line 5, simply because the capacity to absorb the products moved through Line 5 does not exist."

As for why Whitmer has set her sights on Line 5 at a time when Republicans control both chambers of the Michigan statehouse, Yu was unable to enlighten the committee.

"It's something we've been trying to understand ourselves for quite some time," he said. "We're as perplexed as anyone."