Conservatives say finances are solid, but have yet to pay back federal wage subsidy 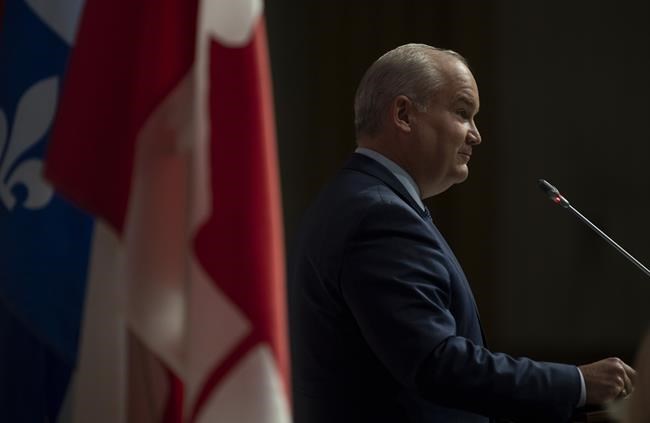 OTTAWA — The Conservatives have yet to fulfil a promise to repay the federal wage subsidy, but the party said Thursday it is in solid financial shape and urged its members to rally together for the next federal election.

Still, the tensions between the grassroots and the party's leadership were on display as thousands of members gathered virtually for the first policy convention since Erin O'Toole became leader last summer.

He'll address the delegates in a highly-anticipated speech late Friday afternoon, after  members have a chance to debate the policies they'd like to see O'Toole carry onto the campaign trail, and also how they'd like to see him run the party itself.

Both issues are on the table after the 2019 federal election saw the Tories fail to form government, and then slip into an internal scandal linked to the use of party funds to pay former leader Andrew Scheer's personal expenses.

Grassroots anger over the use of party funds in that respect became an element of the subsequent leadership race.

But members were also irritated to learn the party used taxpayers' dollars to subsidize political operations, taking advantage of the federal wage subsidy set up to help businesses pay workers despite a loss of revenue during the COVID-19 pandemic.

During his leadership campaign, O'Toole pledged to reform party operations and put a stop to receiving the wage subsidy, which he promised to pay back.

After he won, the party did stop dipping in, but outgoing party president Scott Lamb told thousands of delegates Thursday that repayment hasn't begun.

"We look forward to repaying what we took from the wage subsidy program and give it back to Canadian people," Lamb said.

The Bloc Québécois was the only party in the House of Commons never to apply for the money. The Liberals and NDP also stopped taking it.

The federal Conservatives have outpaced their rivals in fundraising efforts for years, and even with the pause forced by the COVID-19 pandemic, they still ended 2020 ahead.

The party's chief financial officer Scott Gibson told the convention the party is debt-free, and in 2020, raised $20.7 million.

"We ended the year with sufficient money in the bank, more than budgeted, to fund significant pre-election activities in order to support the new leader in advance of the next election, which may be very soon," he said.

The update on the party's financials was the first piece of official business for the convention, which kicked off Thursday not with balloons or rousing cheers, but with instructions on how to click the right links.

The COVID-19 pandemic has forced the event entirely online, and organizers tried to instil some of the normal camaraderie found on the convention floor via videos submitted by members proclaiming their love for Canada through songs, shots of honking geese on the river and container ships in harbours.

The opening elements of the convention also featured an appearance by former Conservative prime minister Stephen Harper, who paid tribute to the former head of the party's fundraising arm, Irving Gerstein.

Tension over how Gerstein and Harper ran the party's fundraising operations — the Conservative Fund operates distinct from the party's overall governance — coloured the final days of Scheer's tenure.

The fallout from that debate, which included how party funds were used for Scheer's personal expenses and how much power the fund has to hire or fire party staff, came back around at the convention.

Members debated several motions aimed at changing the operation of the party's governing council, the Fund, how leaders are selected and who can vote in those contests.

Results were not expected from the electronic voting until late Thursday night.

But one issue was dealt with cleanly — an effort by anti-abortion members of the party to introduce amendments to the party's constitution from the "floor" of the convention, in order to get the party's principles to reflect a clear anti-abortion stance.

Those members had tried to get the issue added to the convention's policy discussions but failed so they then tried a different route through the party's constitution.

But that effort was ruled out of order Thursday, under new rules adopted for the virtual convention format.

This report by The Canadian Press was first published March 18, 2021.