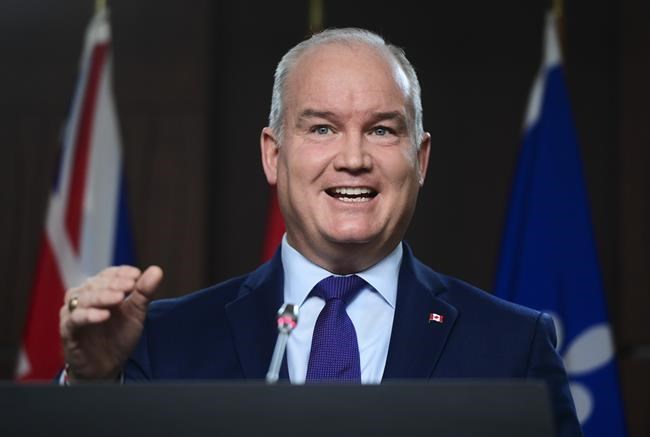 OTTAWA — Efforts to enshrine the reality of climate change in official Conservative party policy failed this weekend, marking a blow to Conservative Leader Erin O'Toole's efforts to position his party as serious on environmental issues.

A vote on the matter came at the party's official policy convention, which concluded on Saturday.

Though the party's policy declaration already contains a lengthy section on that subject, 54 per cent of delegates voted against expanding it to include the sentence "we recognize that climate change is real. The Conservative Party is willing to act."

O'Toole had said as much to delegates in a speech Friday night, saying the debate on the reality of climate change must end because it is real.

"I will not allow 338 candidates to defend against the lie from the Liberals that we are a party of climate change deniers," he said. "We will have a plan to address climate change. It will be comprehensive, and it will be serious."

Delegates to the convention had spent all day Friday debating various policy resolutions, and had been voting throughout the day. Results were tabulated late Friday night.

O'Toole was pressed on his response to the defeat of the motion during a question-and-answer session with party members Saturday, and repeated his remarks from his Friday speech nearly verbatim.

Liberal Environment Minister Jonathan Wilkinson responded to the vote via social media, saying it suggests a rift between O'Toole and the party faithful.

"Even if (Erin O'Toole) cared about fighting climate change, his climate-denying base is stopping that from happening," he wrote on Twitter.

"The (Conservative Party) are moving in reverse, with a leader that won’t correct course, and it's future generations who stand to lose the most."

In addition to adding a line about the reality of climate change, the resolution would have further modified existing party policy to stress the need for highly-polluting Canadian businesses to take more responsibility for reducing their GHG emissions and be accountable for the results.

It would additionally have stated the party believes in supporting innovation in green technology.

During the debate on the resolution Friday, speakers opposed to the motion had quibbled over the focus on emissions at the expense of other pollutants.

"Conservatives need to lead with clarity, focus and intelligent solutions, not buzzwords," said one delegate from the Toronto-area riding of Scarborough Centre.

The motion on climate change had the fiercest opposition from the western provinces, with delegates from New Brunswick and Quebec showing the most support.

Ahead of the convention, the anti-abortion group Campaign Life Coalition had circulated a "voters guide" to the resolutions and had urged its membership to vote down the one on the environment, saying "global warning alarmism" was being used to justify population control and abortion.

This report by The Canadian Press was first published March 20, 2021.

Note to readers: This is a corrected story. A previous version said the vote happened Saturday, but it took place on Friday.