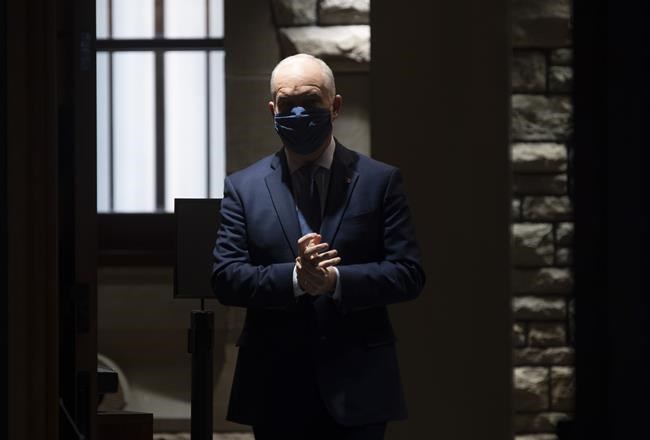 OTTAWA — Conservative Leader Erin O'Toole brushed off the idea Tuesday that a vote by the party's grassroots on climate change should colour Canadians' opinion of his party.

"I'm the leader, I'm in charge," O'Toole said a press conference as he reiterated his pledge that his party will present a plan to address climate change ahead of the next election.

Over the weekend, delegates to the Conservatives' policy convention voted down a resolution that would have included the line "climate change is real" in the party's official policy document.

While the existing document does implicitly acknowledge that fact and the party's 2019 election platform said it explicitly, that didn't stop the Liberals from swiftly jumping on the vote results to attack the Conservatives as climate-change deniers.

They tossed that accusation at the Tories multiple times Monday, both in House of Commons committee hearings and during question period.

The debate, and vote, on the motion came as O'Toole delivered a speech to the virtual convention warning that if the party didn't come around on climate, they could not make any traction among voters.

"We've now fought and lost two elections against a carbon tax because voters did not think we were serious about addressing climate change," he said.

"And I will not allow 338 candidates to defend against the lie from the Liberals that we are a party of climate change deniers. We will have a plan to address climate change."

It's that message that matters, O'Toole said Tuesday.

He suggested delegates voted down the motion because of other changes it had sought to make to the party's official stance on the environment.

In addition to adding the line about climate change being real, the motion proposed adding language that highly polluting Canadian businesses take responsibility for reducing their greenhouse-gas emissions and be held accountable for the results, and that the party believes in supporting innovation in green technologies.

The debate around the motion during the convention heard from just a handful of speakers, as per party rules.

Those opposed voiced concerns that a focus on greenhouse-gas emissions was misplaced, that it did not take into account the adverse impacts of industrial wind-turbine projects and that the party simply didn't need to include the line "climate change is real" since many types of pollution have nothing to do with climate change.

The motion had been advanced by a Quebec riding association, and nearly 70 per cent of the delegates in that province supported it.

Among the voters O'Toole wants to woo come the next election are more Quebecers, and he's seeking to take them from the Bloc Québécois.

"The Conservatives say that climate change does not exist, and the Liberals do nothing about it while pretending to do something about it," he said Tuesday.

"And they will keep supporting generously the oil and gas sector in Western Canada, while we say that this is not the way to do it."

O'Toole said Tuesday what he intends to present to Canadians — before the next election — is a plan that will reduce emissions without using a federal carbon tax.

"Only Mr. Trudeau and the Liberals would tax 30 million households, single seniors, small business owners, farmers drying their grain to try and tackle climate change when they're actually not partnering with the provinces and with large emitters," O'Toole said.

"That is something we're looking at in our plan now."