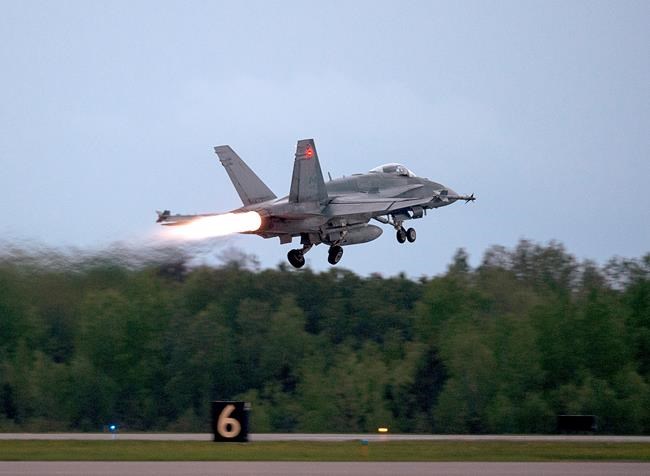 OTTAWA — Canada's top military procurement official says he is optimistic the federal government will finally end its decade-long search for a new fighter jet for the Royal Canadian Air Force next year despite challenges and delays from the pandemic.

The government had hoped to finish that evaluation process later this year and sign a contract with one of the bidders in 2022, with the first jet slated for delivery starting in 2025 and the last arriving in 2032.

Despite some recent hiccups in the process thanks to COVID-19, Troy Crosby, the assistant deputy minister of materiel at the Department of National Defence, says officials remain on track to meet that schedule and finally select a winner next year.

“That is a project where COVID has created some challenges,” Crosby said in an exclusive interview with The Canadian Press.

“Despite all of that, I still see the evaluation being completed this year. And that would get us to a point where we could enter whatever the resulting agreements or contracts are next year in 2022.”

The aircraft competing to replace the CF-18 are Lockheed Martin’s F-35, the Boeing Super Hornet and the Saab Gripen.

The successful selection of a new fighter jet next year would mark the culmination of more than a decade of stop-start efforts marked by mismanagement and political controversy under two successive federal governments.

COVID-19 posed the latest threat to that process, with fighter-jet makers asking the government for more time to submit their bids last year as they scrambled to finish their proposals while keeping staff safe and secret information private.

The pandemic has also created problems for those evaluating the bids, Crosby said.

“Quite a bit of the information is classified,” he said. “So that requires bringing people into workplaces. And we have to do that very deliberately and carefully. But the team that's doing the evaluation has made significant progress, impressive progress.”

That includes recently going back to bidders to offer them an opportunity to clarify some points in their proposals or provide missing information, Crosby said, in much the same way as other military procurement projects.

Officials are on the clock to finish their work sooner rather than later as the CF-18s approach the end of their lives.

The last of the aircraft was supposed to have been retired last year, but Ottawa has been investing to keep them flying for another decade thanks in large part to delays in the purchase of a replacement.

Work is currently underway to upgrade the avionics over the next few years on all 76 CF-18s as well as 18 F-18s that Canada has purchased used from Australia, Crosby said. Thirty-six will receive further upgrades to their combat systems.

The total cost of that effort is expected to run about $1.3 billion.

As for the Australian aircraft, Crosby said 15 of the 18 have been delivered. Three are now flying with the Air Force while the remainder are still going through upgrades and changes to make them compatible with Canada’s needs.

This report by The Canadian Press was first published April 1, 2021.