I know that today’s anniversary will be one most of my Liberal friends will be happy to celebrate.  It was on this date in 1968 that Canada’s Grits, meeting in Ottawa for their leadership convention, elected Pierre Elliott Trudeau their new leader, replacing the retiring Lester B. Pearson.

What is most remarkable about Mr. Trudeau’s victory is the fact he had only been a MP and Liberal Party member for three years when selected leader by delegates.  During his speech to the convention the future Prime Minister outlined his vision for the party and the country, famously describing it as the “Just Society.”

In a leadership race that had begun with nine aspirants, the 46 year-old Trudeau prevailed on the fourth ballot over the two remaining contenders, Robert Winters and John Turner.  Other well-known Liberal Party stalwarts Paul Hellyer, Joe Greene, Allan MacEachen, Paul Martin Sr and Eric Kierans had been eliminated or had withdrawn on previous ballots.  The Trudeau Years had begun.  What a journey it would be.

Click here to view a video (from the CBC archives) of the announcement of Mr. Trudeau’s victory and an excerpt from his ensuing speech. 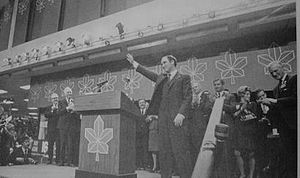