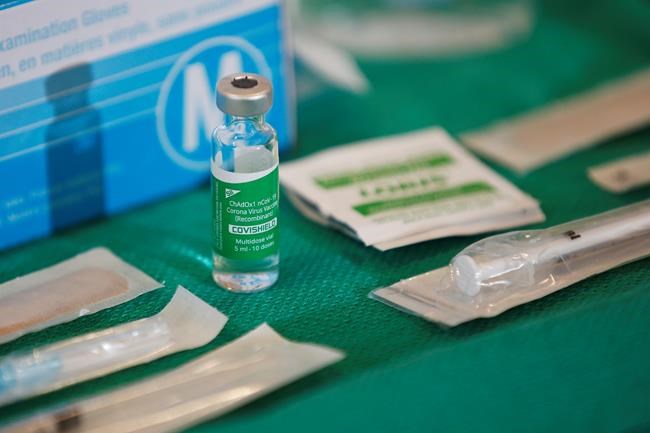 At the epicentre of the national outbreak, meanwhile, the Ontario government walked back some widely criticized new measures meant to contain surging case counts across the province.

Hinshaw said she is taking the event "extremely seriously," but continues to recommend AstraZeneca for anyone 55 and older.

“These blood clots remain extremely rare, and anyone who is aged 55 and older faces much higher risks from COVID-19 infection than from this vaccine," Hinshaw told reporters on a conference call.

“I know that reports of any adverse events can be scary, especially when it involves a new vaccine," she added. "If I were in this age category I would get this vaccine."

More than 700,000 doses of AstraZeneca's vaccine have been administered across Canada to date.

The global frequency of VITT — also referred to as VIPIT — has been estimated at about one case in 100,000 to 250,000 doses. In a stark comparison, Albertans 55 and older who are diagnosed with COVID-19 have a one in 200 chance of dying from that infection, Hinshaw said.

In Europe, only a few dozen cases of the rare post-inoculation blood clots have been reported compared to the millions vaccinated with AstraZeneca. Most of those cases have occurred within 14 days of the shot, and the majority were in women under 55.

A Quebec woman was the first in Canada to develop a blood clot after being vaccinated with AstraZeneca.

The woman received the vaccine produced at the Serum Institute of India, known as Covishield, and was recovering at home, the Public Health Agency of Canada said Tuesday.

A decision around a broader age range in which it is deemed safe to receive AstraZeneca shots is coming in the "near future," Hinshaw said.

Health Canada said it continues to believe the benefits of the AstraZeneca shot outweigh the risks.

Other pandemic concerns simmered to the surface in Ontario on Saturday, a day after Premier Doug Ford announced anti-pandemic powers that allow police to stop any motorist or pedestrian and ask where they live and why they're not home.

The strict new measures drew furious criticism as the number of infected people in hospital reached record levels, prompting the provincial government to reconsider the clampdown.

The province amended the rules on Saturday evening, saying  police will only be able to stop those who they have reason to believe are attending an organized public event or social gathering.

Ford, meanwhile, said rules ordering the closure of playgrounds would be amended to keep the facilities open. There was no word on the fate of golf courses and other outdoor recreational spaces, which were also shuttered in the latest round of public health measures.

"Ontario’s enhanced restrictions were always intended to stop large gatherings where spread can happen," Ford said. "Our regulations will be amended to allow playgrounds, but gatherings outside will still be enforced."

The government source, speaking on background, told The Canadian Press that the government was responding to widespread critiques about the new law enforcement powers.

"We have heard a lot of feedback on this in the last 24 hours in terms of the scope and applicability," said the source, who was not authorized to speak publicly. "We will be issuing a clarification to police chiefs and the public about the scope and scale of the order."

Politicians and civil libertarians attacked the anti-pandemic restrictions earlier in the day, calling them misguided and describing the beefed-up police powers as overkill.

"I am very concerned about arbitrary stops of people by police at any time," Toronto Mayor John Tory said in a Saturday tweet.

While violating restrictions can carry a $750 fine, failure to provide police with requested information can result in criminal charges, according to the province's association of police chiefs.

Big and small police forces across the province said they had no intention of exercising their new-found powers. Civil rights groups, however, took little comfort in such statements.

“Low income and minority communities have borne the brunt of this pandemic in terms of cases and mortality, and they are now more likely to bear the brunt of police enforcement.”

More than 2,000 patients were in Ontario hospitals due to the novel coronavirus on Saturday  for the first time since the onset of the year-long pandemic. Of the 2,065 patients receiving treatment, the province said 726 were in intensive care and 501 were on a ventilator.

“In Ontario particularly, the mortality is going to rise from COVID-19 if health care gets overwhelmed,” said Dr. Zain Chagla, an infectious disease physician at St. Joseph's hospital in Hamilton and an associate professor at McMaster University.

Ontario logged 4,362 new COVID-19 infections on Saturday, down from the single-day peak of 4,812 recorded a day earlier.

Quebec also reported its highest number of hospitalizations and intensive care cases due to COVID-19 since the second wave.

The province recorded 692 hospitalizations —175 of them in ICUs — over the previous 24 hours, health officials said Saturday.

Elsewhere, officials in Nunavut reported six new cases of COVID-19, all in the capital city of Iqaluit.

This report from The Canadian Press was first published April 17, 2021.

— With files from Colin Perkel