On This Day in Canada’s Political History: Death of Father of Confederation Sir Oliver Mowat

It was on this date in 1903 that Ontario and Canada lost a political giant with the death of Sir Oliver Mowat.  A Father of Confederation, the Kingston-born son of Scottish immigrants served a commanding 24 years as Ontario’s Premier, a record still unmatched in the twelve decades that have followed.

In 1896, Mowat answered the call of Canada’s Prime Minister and left Queen’s Park to join Sir Wilfrid Laurier’s Liberal cabinet as Minister of Justice.  Later, Laurier appointed Mowat Lt.-Governor of Ontario, the post he held at the time of his death.

On April 20, 1903, before a hushed House of Commons, Prime Minister Laurier paid tribute to his fallen friend and colleague.  His tribute is found below.

ON THE DEATH OF SIR OLIVER MOWAT

Prime Minister Sir Wilfrid Laurier: Mr. Speaker: Before we proceed further with the business of the House, it is my painful duty to inform it officially of the death of the Lieutenant-Governor of the Province of Ontario. Although Sir Oliver Mowat never was a member of this House, he was for some time a respected member of another branch of the legislature and for more than forty years he occupied in the national life of this country a position of such prominence that the House would be remiss to a proper sense of its own dignity if it failed in some great way to record its appreciation of the great loss the country has sustained.

This loss will be all the more keenly felt because Sir Oliver Mowat was one of the last of the few survivors of that generation of exceptionally strong men who, after the Union of Upper and Lower Canada in 1840, contributed to revolutionize, peaceably but thoroughly, the relation which had previously existed between the colonies and the parent state, and to shape our destiny and insti­tutions to the form and condition which we now enjoy. In that remarkable galaxy of men which included Brown, Macdonald, Cartier, Dorion, Mackenzie, Holton, Galt and McGee, Sir Oliver Mowat was one of the most remarkable, and to him belongs the undisputed distinction of having given more continuous years of service to the state than any other man, in our history.

If we examine his career, we realize what gigantic strides have been made in the comparatively short period of a single life, from those old days when the provinces of British North America were a few small and scattered Crown colonies to the present statues of Canada, a nation. His life embraces the whole space that has elapsed from those old days when the rights, the opinions, the sentiments and the feelings of the people were haughtily scorned and tramped upon by an audacious oligarchy, to those happier days of our own time, when questions arising from the conflict of opinions and sen­timents inseparable from human affairs, are settled by the regular and normal action of constitutional government.

He was a mere youth when the abuses of the former regime culminated in the rebellion of 1837, and one of his last official acts was to help to obtain without violence, legitimate, honourable and fair concessions to the just claims of the minority in the province of Manitoba.

During the whole of that space of time, Sir Oliver Mowat took an active and ever-growing part in the contests, agitations and struggles which eventually brought about Confederation. His was a remarkably successful career. It can be said of him, as was said of the Duke of Wellington, that he scarcely ever had a reverse and never lost a battle. Whatever he understood, to whatever tasks he applied himself, he easily came to the front rank.

After having completed his classical studies, he chose the bar as his profession and rapidly rose to the greatest eminence as a lawyer. He entered politics in a time of violent perturbation and at once took a prominent part as a debater in an assembly com­posed of men as capable of adorning any assembly in the world, and of such ability as to be equal to any emergency. Then he was appointed to the bench, where he was distinguished by all the qualities of an able and learned judge. After a time he re-entered politics and became the premier of his native province, a position which he maintained for twenty-four years in the face of stirring Opposition, and only abandoned at my invitation to enter the Dominion Government in order to give us the benefit of his advice, experience and ability in the settlement of very important and irritating questions.

During these twenty-four years that he was premier of the Province of Ontario, every man must agree that he gave to that province a government which can be cited as a model for all gov­ernments, a government which was honest, progressive, courageous and tolerant.

If there was one thing in particular which marked his career at this time of life, I think it could be found in the policy which he always maintained of giving a broad, generous and tolerant treat­ment to the minorities of that province. In this he performed a great service not only to the Province of Ontario, but to the whole people of the Dominion of Canada.

Still, if I were called on to say what in my estimation is the one characteristic which will chiefly mark the career of Sir Oliver Mowat when it comes to be reviewed by the historian of the future, it seems to me that the one special feature of his character and career, which will stand out in bolder relief than any other, is that of all the men who contributed to shape our institutions and bring them to the degree of excellence they have now reached, he perhaps performed the largest share. I do not believe that statement can be successfully disputed; there is abundant authority to justify it. True it is that he did not take as active part in the preparatory work which eventually culminated in Confederation as some of the other men with whom he was associated, for after the principle had been con­firmed by the Quebec Conference in 1864 he withdrew from the political arena to become a judge, and for some years was removed from political contests.

George Brown is given the credit of having, by his powerful agitation, forced the issue of Confederation; Sir John A. Macdonald has the merit of having brought Confederation into active opera­tion; but to Sir Oliver Mowat belongs the credit of having given it its ultimate character as a federal compact. Shortly after Confederation had been launched, and while its fundamental principle was still on trial, while its orientation was still uncertain, while it was doubtful if the union of the provinces would be in a legislative union though federative in name, he gave up the quiet and dignity of repose of a judicial life to become the leading champion of the federative principle.

At that time Sir John Macdonald was the most commanding personality of our national life; perhaps it may be said that he was then in the zenith of his fame and power; and for twenty years his most successful opponent was Sir Oliver Mowat. For twenty years Sir John Macdonald, as the head of the Government of Canada, and Sir Oliver Mowat, as the head of the Government of the Province of Ontario, were engaged in a contest which, whether it was on one point or another, always centred around the federative principle of the constitution. . . . It is a well-known fact that Sir John Macdonald was not at heart a federationist; he was a legislative unionist. It is a matter of history that if Sir John Macdonald had had his own way at the conference of 1864 at Quebec the union of the provinces, instead of being federative would have been legislative. It is also a matter of history that after he had become the leader of the new Government after Confederation, his constant efforts were directed towards centralization. It is equally a matter of history that on every occasion it was part of his policy to claim for the federal administra­tion powers which under the compact of union seemed fairly to belong to the provinces.

On the other hand, Sir Oliver Mowat was a very pronounced federalist, and Sir John Macdonald found, on every occasion, the premier of Ontario before him determined and resolved to uphold and maintain the federalist principle of the constitution. It is a matter of history that in all those contests, Sir Oliver Mowat invari­ably came out successful. The interpretation he gave to our consti­tution was invariably maintained by the courts, and he is certainly entitled to be pronounced the most correct interpreter of our con­stitution that Canada has yet produced.

Of course, on these questions men differ and opinions are not identical. There are men who believe the views held by the late Sir John Macdonald were the most correct views. There are others who believe the views held by Sir Oliver Mowat more accurately inter­pret our constitution. But whatever may be the opinion we enter­tain, whether we agree with Sir John Macdonald or with Sir Oliver Mowat, we must admit that as between the two great men who did so much for Canada, at all the events the merit of constitutional ability in the interpretation of the constitution seems to belong rather to the gentleman whose loss we so deeply deplore.

There was, however, another point upon which Sir Oliver Mowat and Sir John Macdonald were in perfect agreement. Much as they differed on the question of the interpretation of the constitu­tion and other questions, they were both extremely devoted in their attachment to the land of their ancestors. On every occasion it was their motto to be true to the British connection. Sir Oliver Mowat was ever true to the province of which he was the premier, true to the Dominion of which he was one of the architects, and true to the British Empire of which we form a part.

It is no doubt the wish of every one of us to do what we can to show our respects to his memory. 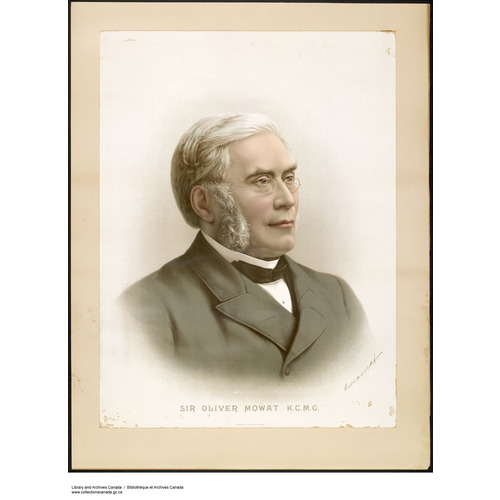