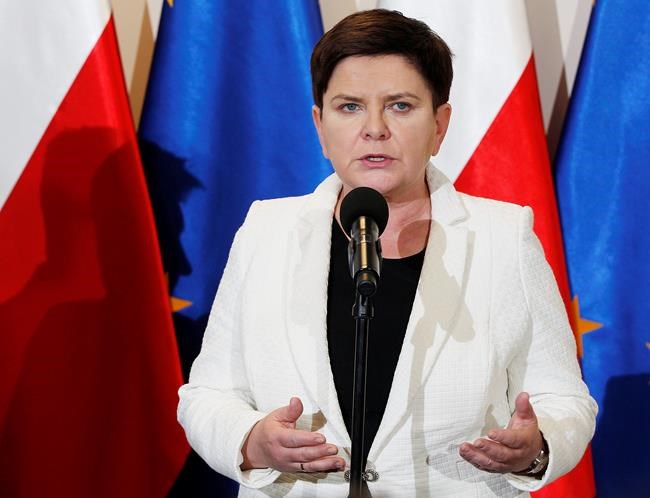 WARSAW, Poland — Relatives of former Auschwitz prisoners from Poland are protesting the appointment of a top member of the country’s right-wing ruling party to an advisory council at the state-run Auschwitz-Birkenau museum in Poland.

They argue that the former prime minster, Beata Szydlo, has tolerated “openly fascist" groups and supported attempts to stifle research into the Holocaust, among other complaints.

Szydlo was appointed in April to the Auschwitz-Birkenau State Museum Council, a body of experts that advises the museum director. That prompted three members of the nine-member panel of experts to resign, followed by a fourth resignation reported this week.

On Friday evening, the news portal Onet carried a letter signed by children and grandchildren of former Polish prisoners, as well as one Auschwitz survivor, addressed to Prime Minister Mateusz Morawiecki.

They did not want Szydlo because of her and the ruling Law and Justice party's strong opposition to accepting refugees and the conservative party's attempts in the past to win over voters on the extreme right.

“We remember statements that excluded refugees, the undermining of achievements of Holocaust researchers, the toleration of openly fascist organizations, and finally denying European Union alliances,” they wrote to Morawiecki, according to the letter quoted by Onet. “We do not agree to this.”

Early on during World War II, the German forces operated Auschwitz as a camp for Polish prisoners, including Catholic clergy and members of the resistance. They later created nearby Birkenau for the mass killing of Jews from across Europe. In all, some 1.1 million people were murdered at the site located today in southern Poland.

Among those who signed the letter to Morawiecki were the son and two granddaughters of Capt. Witold Pilecki, one of the most notable heroes of the Polish resistance. Pilecki volunteered to be an Auschwitz inmate and smuggled out reports of atrocities there before fleeing. He was tortured and executed in a show trial by communists after the war.

There were no immediate reactions from the Polish government on Friday evening.

Culture Minister Piotr Glinski, who appointed Szydlo to the council, reacted after the first three resignations by denouncing them.

Glinski said it was an for the museum to have Szydlo on the council and said the resignations threatened to “politicize the discussion around the most important museum of martyrdom in Poland, a place of world heritage.”

Szydlo is now is a member of the European Parliament for the Law and Justice party. She has studied ethnography and history, and is from the area of Oswiecim, the Polish town where the site of the former Auschwitz death camp is located.