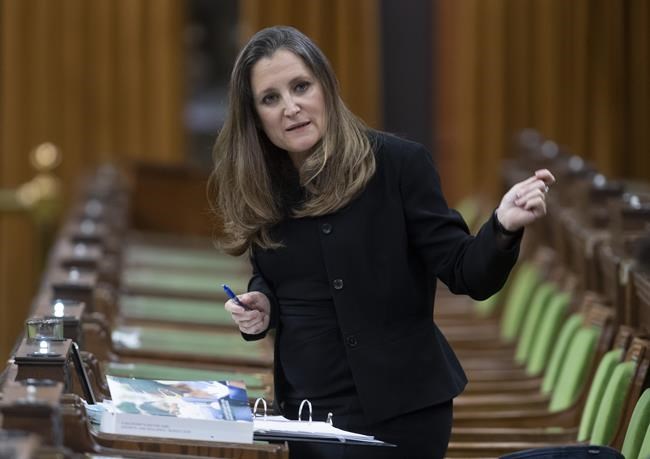 OTTAWA — The federal Liberals' bill to enact parts of their budget includes changes to emergency aid, taxes and a $15 national minimum wage alongside other items such as an election-law amendment.

The change to the Canada Elections Act would specify that it is illegal to "knowingly" make false statements about a candidate or party leader.

There are also provisions in the bill to give the National Research Council a mandate to produce "drugs and devices" to protect or improve Canadians' health.

Other measures in the bill were supposed to have been in an implementation bill last year, but weren't when the Liberals eschewed tabling a budget due to the COVID-19 pandemic.

Among those measures are changes to the Social Security Tribunal that adjudicates Canadians' appeals of rulings on their requests for  employment insurance and Canada Pension Plan benefits.

Another such change is easing access to a benefit for parents of murdered or missing children, and doubling to 104 weeks the leave available to them under the Canada Labour Code.

A spokeswoman for Finance Minister Chrystia Freeland said all the measures in the legislation were detailed in the April 19 budget. Katherine Cuplinskas said in a written statement that the government hoped other parties would back the bill.

The fate of the minority Liberal government rests on getting support from one major party in the House of Commons, without which the government would fall and trigger a process that would likely lead to an election campaign.

NDP Leader Jagmeet Singh said there were several measures in the bill that were positive, pointing to the $15 minimum wage that his party had pushed for during the 2015 federal election before Singh became leader.

At the time, the Liberals under Justin Trudeau panned the New Democrat proposal because it left out the majority of workers whose hourly wage floor is set by provinces.

The bill would set the minimum wage at $15 per hour, or the corresponding provincial minimum if it is higher, with annual increases to keep up with inflation.

But Singh noted it wouldn't come into effect for six months until after the bill becomes law, which he called an unnecessary delay.

He also said he was concerned that the bill didn't address issues around paid sick leave that experts have cited as a key measure to slowing the spread of COVID-19 through workplaces.

"In general, this is what we've seen with the Liberal government: They signal some right, good things and then say some good announcements, but when it comes down to the actual work being done, they're not doing the work necessary," Singh told reporters on Parliament Hill.

Conservative Leader Erin O'Toole called the budget a "major letdown" that didn't deal with the issues of the pandemic, including work on funding for provincial health-care systems.

He also said the budgetary plan "spends in a way that is threatening the future prosperity of Canadians."

Budget forecasts estimate the national debt will rise to $1.4 trillion on the back of consecutive deficits over the next five years.

"We will continue to examine the budget and the implementation act, hold the government to account on it and propose alternatives to secure a future for Canadians," O'Toole said during a news conference.

This report by The Canadian Press was first published May 3, 2021.