Grappling with how to press the virtual flesh, parties gear up for election showdown

By Christopher Reynolds, The Canadian Press — May 9 2021 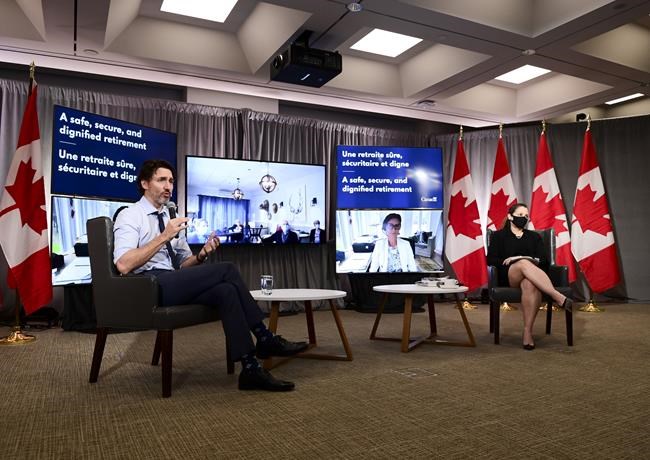 OTTAWA — The three main national parties are firing up their election engines, even as they insist they want to steer clear of a campaign.

Liberals, Conservatives and New Democrats are on the move in advance of a potential election this year, recruiting candidates, training volunteers and grappling with how to kiss babies and press the flesh in a virtual, pandemic-restricted world.

The uncertainty of COVID-19 has left each party ravenously raising funds and wooing would-be nominees while suspended in a kind of limbo, forced to map out multiple scenarios for an election whose timing under a minority Liberal government remains unknown.

The Conservatives are first out of the gate on several tracks, including fundraising, nominations and digital prep.

The party says it raised a record $8.5 million in the first three months of the year — a windfall more than twice the size of any other party’s last quarter — and nominated 197 candidates so far, including incumbents. It also set up what communications director Cory Hann calls a "state of the art broadcast studio" in a ballroom at the Westin hotel in downtown Ottawa equipped with stage lights, multiple cameras and a massive background screen.

"It allows us to beam the leader across the country, whether it be through a Zoom meeting or a live stream or press conferences," Hann said.

The Tory election budget of $30 million also means Leader Erin O’Toole could spend indulgently to criss-cross the country preaching his message, one church basement at a time, should public-health measures allow it.

For the NDP, ground zero is a basement.

Jennifer Howard, campaign director and chief of staff to Leader Jagmeet Singh, spends her days in the depths of her south Ottawa home among "my many chargers and my earbuds … and about three baskets of laundry to fold."

Like other parties, the NDP is planning a heavier focus on online campaigning and social media advertising, which can micro-target voters by age and location to provide more bang for your buck.

Party brass have met with strategists who helped run U.S. President Joe Biden’s field operations last year as well as organizers from British Columbia to New Zealand to soak up lessons from elections fought in the grips of COVID-19.

Morale remains a concern on all sides. Howard hopes her party can grow camaraderie among the grassroots without the hothouse of bricks-and-mortar headquarters or late-night beers and bull sessions.

"You do it because you believe in something, but there's also a great social element to it," she said of pre-COVID campaigning.

"Somebody brings in donuts at the end of a hard night and you sit back and talk about politics. And when we're all in our homes doing our work, you lose that."

The party also aims to capitalize on Singh's social media savvy, which can offer a casual tone and light-on-politics message piped out via Instagram and TikTok. Recent posts show the 42-year-old politician dancing to hip-hop beats in a Montreal square and tying his hair in a Sikh warrior knot, part of an effort to establish an emotional connection with digital natives.

"It might not be possible to do door-to-door campaigning in some parts of the country, which has been a lot of the kind of bread and butter of NDP style grounds campaigns," said NDP national director Anne McGrath, noting leaders' social media game could be all the more critical.

The NDP has nominated 65 candidates, with 33 more nomination dates scheduled before the end of June. The party snagged a $22-million loan to anchor an election budget of $24 million, said officials, who hope to make gains after shedding seats in 2019 and 2015.

The Greens have named five candidates, including all three MPs and Leader Annamie Paul, who remains without a seat in the House of Commons. The party said it has received more than 200 applications, with some 20 likely candidates vetted so far.

The Liberals have nominated 152 candidates — 129 are incumbents — as of this week. Four incumbents have said they won't seek re-election so far, including organizing heavyweight and former cabinet minister Navdeep Bains, the Grits' campaign co-chair.

The Liberals hope to build on their relative popularity despite an initially shaky vaccine rollout and a widening fundraising gap with the Tories, with support particularly strong in vote-rich Ontario, according to recent polls.

A national convention last month marked the largest policy gathering in the party's history, with more than 4,000 faithful in virtual attendance. More than half were first-time attendees, "and that energy has carried strongly into their new involvement as active volunteers," said party spokesman Braeden Caley.

Political telemarketing has also made a comeback, with millions more Canadians at home during the day.

The Liberals' "virtual weekends of action" — the 12th since spring 2020 occurred Saturday — deploy Grit volunteers to phone local residents in more than 200 communities. The calls see canvassers chat up seniors, pitch neighbours and request feedback on policy or involvement in the looming campaign.

Back in her basement, Howard looked past her screens and cords to the tulips and daffodils sprouting in her backyard.

The campaign gizmos may have advanced, she said, but the perennials of politics — connecting with voters, hearing their concerns, revving up the base — remain the same.

How Canadians respond to those entreaties, both newfangled and old-fashioned, will play out at a date yet unknown.

— With files from Stephanie Taylor and Joan Bryden

This report by The Canadian Press was first published May 9, 2021.