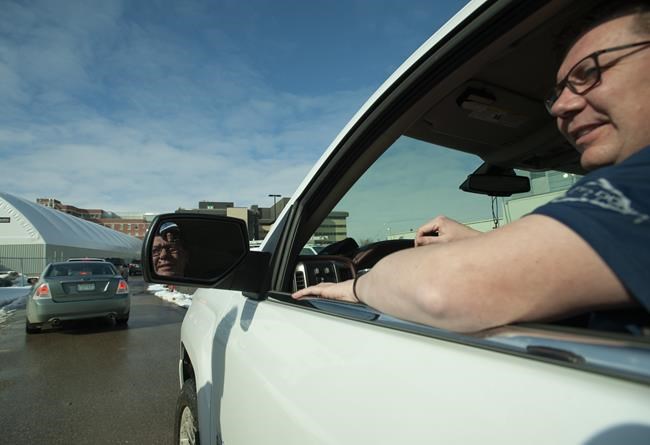 CALGARY — Neighbouring provinces are eyeing Saskatchewan's plan to ease COVID-19 restrictions in tandem with vaccination rates, but experts are warning the approach could lead some to a false sense of security.

Saskatchewan's "reopening road map" outlined last week says public health measures are to start to relax three weeks after 70 per cent of residents 40 and older have received their first shot and all adults are eligible.

Step 1, which could take effect as soon as month's end, would allow restaurants and bars to seat six at a table, fitness classes to resume with three metres between participants and gathering limits to ease.

"This has worked in other jurisdictions and we firmly believe that it will work here in Saskatchewan," said Premier Scott Moe, citing the United Kingdom and Israel as examples.

Nazeem Muhajarine, a professor of community health and epidemiology at the University of Saskatchewan, points out that more than 20 per cent of the U.K.'s population has received a second vaccination, which affords greater protection against the virus than just one shot. The country is also reopening after having imposed much more severe restrictions.

In Israel, more than half the population has received two shots.

Muhajarine said Saskatchewan's dual-dose coverage is likely to be closer to 10 per cent.

"One dose of a vaccine is not enough to give the population full protection, particularly against the variants," he said.

"The variants are unpredictable, unknown and the dark horse in all of this."

Manitoba Premier Brian Pallister has said his Progressive Conservative government is working on a plan he hopes will provide hope and help people comply with health orders.

Health officials have said Manitoba's plan will be connected to vaccine rates, but will also consider hospital capacity and case numbers.

Alberta recently eased restrictions on visits to long-term care facilities because almost all residents have received both doses.

Premier Jason Kenney has said Saskatchewan has a "thoughtful" framework that his province is exploring.

"We've seen some governments, some public health experts, say that even if you've received the double dose, it makes no difference. You've got to stay shut down at home indefinitely," Kenney said.

"That I think disincentivizes people from getting the vaccine, especially the people who are vaccine hesitant."

Muhajarine said dangling vaccines as a carrot could have the opposite effect. "People could actually get a false sense of security."

He said he understands that people need to see a path toward ending restrictions.

"Canadian summer is what we live through the winter for," he said.

"We also have to make sure that we don't put our lives and our loved ones lives at risk unnecessarily or too hastily."

"(Moe's) not just saying when (the vaccination rate) hits 70 per cent, we're going to flap open the doors," he said.

"We're going to do it in a stepwise manner with a combination of vaccination and restrictions."

Gregson noted a segment of the population would still remain unprotected.

"If you are in an age group where you're at really high risk of dying and death, and you're not vaccinated, this plan will help protect the health-care system, but it's not going to protect you as an individual," said Gregson.

Outbreaks will still occur as "birds of a feather flock together" and like-minded unvaccinated people gather, said Gregson. But, he adds, it's less likely those would grow into super-spreader events in the broader community.

"This virus is not going away, no matter what percentage of the population we get immunized," said Gregson.

"And if you think herd immunity is going to work for you, you are wrong."

This report by The Canadian Press was first published May 11, 2021.