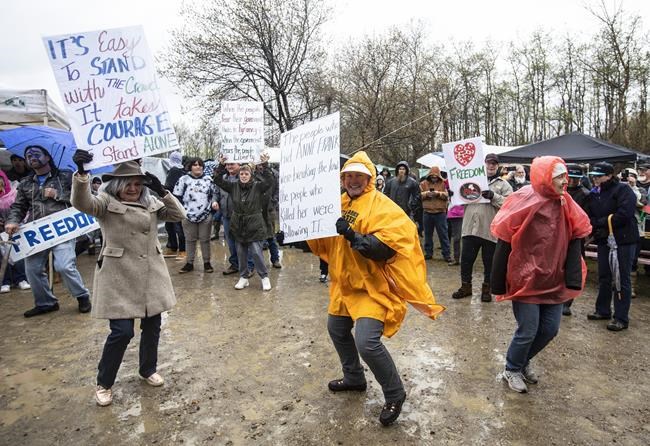 EDMONTON — A criminologist says a recent court order that allows Alberta RCMP to arrest organizers of anti-lockdown rallies can limit or prevent future gatherings but does little to educate people who don't believe in the COVID-19 pandemic.

The injunction issued May 6 allows police, for the first time, to arrest or remove anyone who is organizing, promoting or attending protests that challenge public health restrictions.

"It becomes personally costly for people to attend these kinds of events and, while that may not change their minds, it will impact people's ability to engage in this kind of activity," said Stanislav Vysotsky, an associate professor of criminology and criminal justice at the University of the Fraser Valley in Abbotsford, B.C.

But the order doesn't do enough to explain to people the consequences of their actions, he said.

"There is this need to balance individual rights with public health responsibility, and making sure that our individual actions are not causing harm to others. This is where this becomes a tricky issue."

Rallies and protests against lockdowns, masks, other COVID-19 restrictions and vaccines have been occurring regularly in Alberta.

Vysotsky and others say anti-lockdown rallies are happening in larger numbers in the province compared with the rest of Canada and are attended by conspiracy theorists.

Earlier this week, three people were ticketed and a separate order was issued against the owner of a cafe and gas station in Mirror, Alta., who organized an anti-lockdown protest last weekend. Health authorities said Christopher Scott's business was not following public health measures and had shut it down a few days earlier.

About 400 people showed up in the rain and without masks. They cheered and clapped for Scott as he stood on stage and encouraged the crowd to challenge the seriousness of the pandemic.

Scott is before the courts for contravening the injunction and Alberta's chief medical health officer, Dr. Deena Hinshaw, is to be cross-examined during a hearing.

The weekend before, when the province set a new record for infections, up to 1,500 people attended a maskless "No More Lockdowns'' rodeo in central Alberta. The two organizers of that event are to appear in court Monday.

Three pastors also have trial dates after holding services that officials say ignored capacity limits, distancing and masking. The pastors have argued they have the right to gather and worship under the Charter of Rights and Freedoms.

"Everyone has this feeling that maybe they don't want to follow the public health restrictions as an individual. Outside of grumbling about it, you may not actually do anything about it," Logan said.

"But if you have these individuals communicating to people to contravene the Public Health Act, that is something that, at the end of the day, we have to address."

Kelly Sundberg, an associate professor of economics, justice, and policy studies at Calgary's Mount Royal University, said mixed messaging by Premier Jason Kenney is responsible for a lot of the anger Albertans are feeling.

Sundberg points to the time when Kenney compared COVID-19 to just another flu. As well, the public doesn't trust a government whose politicians tell people to follow health orders then secretly go on vacations to out of country, he added.

"When you have politicians who believe the conspiracy, who don't listen to health authorities, don't listen to others in government, this is where we're starting to see toxic politics having a direct impact on human life, on public safety, and health," Sundberg said.

"Wearing a mask has become a political statement."

Vysotsky and Sundberg suggested the government can slow down COVID-19 infection rates — among the highest in North America — by speaking directly to community leaders.

"Alberta's government needs to build some sort of dialogue with people who can be influential in the communities that are being drawn to these rallies, and can influence people to think differently about the pandemic and about their role in the pandemic," said Vysotsky.

"The vast majority of people who attend these rallies are people who want the right thing but have just been persuaded after listening to some charismatic charlatan," Sundberg added.

Logan said investigators in Alberta are aware of upcoming anti-mask and anti-lockdown rallies and police continue to communicate with protest organizers.

This report by The Canadian Press was first published May 14, 2021.

Note to readers: This is a corrected story. An earlier version had Dr. Hinshaw's first name spelled incorrectly.