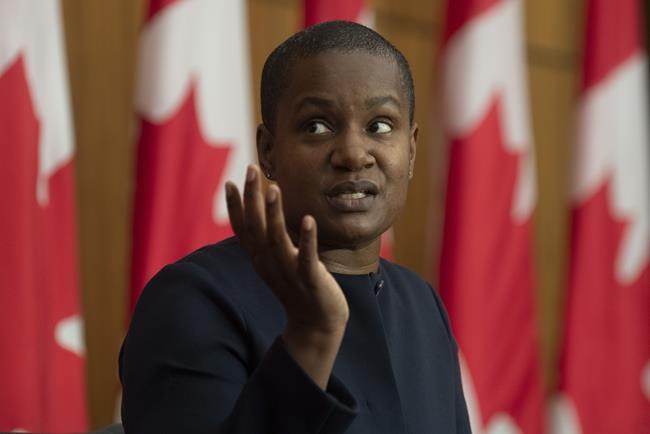 OTTAWA — The Israeli-Palestinian conflict has exposed a fault line in the Green party, threatening political unity as lawmakers break from their leader and rank-and-file members clash with a party spokesman.

The dust-up kicked off after Green MP Jenica Atwin directly challenged Leader Annamie Paul's position on the crisis. In a Twitter post last month, she said a statement from Paul calling for de-escalation and a return to dialogue was "totally inadequate."

"I stand with Palestine and condemn the unthinkable airstrikes in Gaza. End Apartheid!" Atwin wrote on May 11.

The tweet followed one a day earlier by Green MP Paul Manly, who said that the removal of Palestinian families from the East Jerusalem neighbourhood of Sheikh Jarrah "is ethnic cleansing."

Noah Zatzman, a senior adviser to Paul, expressed solidarity with Israel in a May 14 social media post that accused many politicians, including unspecified Green MPs, of discrimination and antisemitism.

"We will work to defeat you and bring in progressive climate champions who are antifa and pro LGBT and pro indigenous sovereignty and Zionists!!!!!" he said in the post, which he told The Canadian Press was meant as a response to the Green MPs as well as the broader issue.

The internal rift has only widened in the week and a half since a tenuous ceasefire was reached in the 11-day war that killed more than 250 people, mostly Palestinians.

The fallout includes online accusations from prominent Green party members, such as 2020 leadership runner-up Dimitri Lascaris, who says Zatzman has defamed him, Atwin and Manly by accusing them of antisemitism.

Playing out in full public view rather than party backrooms, the feud has highlighted a sinkhole on the Green road to more socially progressive ground under Paul, who has sought to steer the party away from earlier efforts to highlight its fiscal conservatism.

Paul has attempted to remain above the fray, saying party debate is healthy but that increasing reports of antisemitism in Canada must be confronted.

"As only the second Jewish person to lead a federal party with seats, I will say that antisemitism has no place in politics," Paul said, adding that she is "very troubled" by its recent resurgence. (The first was David Lewis, who led the federal NDP in the 1970s.)

Reports of antisemitic incidents have shot up across Canada over the past month, according to three Jewish advocacy groups whose hate hotlines have been flooded with calls in a spike the organizations link to the latest Mideast crisis.

"Using accusations of antisemitism to shut down legitimate criticism of human rights abuses is both offensive and dangerous. It dilutes the weight of the word," Manly said in an interview.

He also cited an article on his website titled, "Criticizing Human Rights Abuses Is Not Anti-Semitism," written by his chief of staff and longtime friend Ilan Goldenblatt, a former Israeli soldier.

Greens, who pride themselves on the independence of MPs in caucus that is not whipped, are not the only party to feel the centre of political gravity shift on the Israeli-Palestinian conflict.

Internal tensions over the issue nagged New Democrats in the run-up to April's policy convention, but Leader Jagmeet Singh's call on the federal government to halt arms sales to Israel last month drew little blowback from the base.

"These are long festering issues and Annamie is attempting really to clean it up … and smooth things over," Zatzman said in an interview.

He pointed out that Manly was one of multiple would-be nominees rejected by the NDP under former leader Thomas Mulcair ahead of the 2015 election for previous comments on Israel.

The escalating tensions over the past month have bubbled over into a barrage of antisemitic harassment against Paul as well as himself, Zatzman said.

"When they're saying things like 'apartheid' and 'ethnic cleansing,' I think they knew how I would react."

Lascaris, a Montreal-based lawyer, said Paul has been "very, very evasive" about her views on the Israeli-Palestinian quandary.

Lascaris, who described himself as atheist, later said the Christian reference was unintentional and a "poor choice of words."

Zatzman also said that "we're making a bet" by going "mainstream" to appeal to voters comfortable with Canada's long-standing support of Israel.

Lascaris, along with a few dozen commenters on the Green Party of Canada Supporters Facebook page, has called for Zatzman's removal. Lascaris had been mulling an election run in a Montreal riding until last month's fracas, he said.

But Zatzman stands by his concern that the line between criticism of Israeli actions and antisemitism has been crossed.

He pointed to posts, including one that mentions the private Jewish high school he attended in Toronto and his past connections to Hillel — a Jewish campus organization — and Birthright Israel, which offers young Jews, mostly from the United States and Canada, a free 10-day trip to the country as a way to forge a personal connection.

Hamish Telford, an associate professor of political science at the University of the Fraser Valley, said that in trying to straddle a "fairly neutral Canadian position" in favour of a two-state solution, Paul may have set the stage for even sharper divisions in her party.

"All parties are trying to navigate these sorts of electoral dynamics when they are considering this issue," he said, noting the NDP has taken the strongest pro-Palestinian position.

Paul's faith adds another layer of sensitivity to the conversation, he said.

This report by The Canadian Press was first published June 1, 2021.