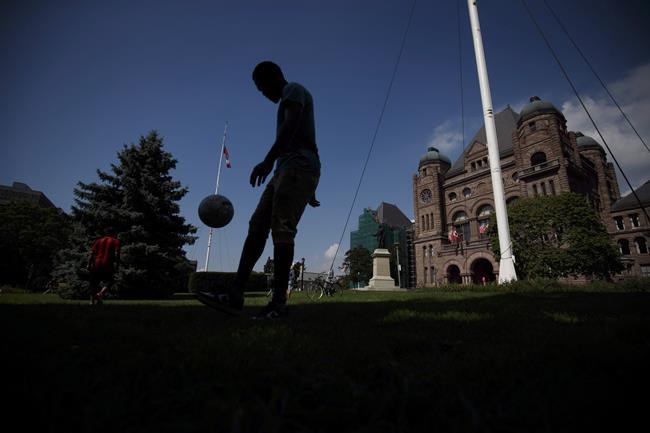 TORONTO — The Ontario legislature has removed a painting and bust of Egerton Ryerson following a request from the leader of the Opposition to relocate the artwork of the man credited as an architect of Canada's residential schools system.

NDP Leader Andrea Horwath's office wrote to the legislature's speaker this week requesting that the art, which was displayed directly outside her office, be moved.

Horwath's office said the request was made in light of the discovery in Kamloops, B.C., of what are believed to be the remains of 215 Indigenous children at a former residential school.

"Andrea felt it was important that her staff, MPPs and any visitors to the building don’t need to confront those objects coming and going from her office," the party said in a statement Friday.

Ryerson was one of the architects of Canada's residential school system, which sought to convert and assimilate Indigenous children into Canadian culture and saw them suffer widespread physical and sexual abuse.

Legislature Speaker Ted Arnott said the bust and portrait of Ryerson that were previously displayed outside Horwath's office on the third floor of the building were moved Thursday. As of Friday, both had been placed into storage.

A second bust of Ryerson, however, remained on display at the legislature Friday afternoon.

Premier Doug Ford's office did not immediately respond to a request for comment.

Ryerson's legacy has been a topic of heated discussion in recent days after the discovery in Kamloops.

There have been growing calls to rename Toronto's Ryerson University and remove a statue of Egerton Ryerson from its campus.

Earlier this week, the university's school of journalism said it would rename two of its publications ahead of the new school year, dropping any reference to the man the school is named after.

A statue of Egerton Ryerson was vandalized with red paint and graffiti on the university campus earlier this week.

Asked Friday about the debate over institutions carrying the name of figures like Egerton Ryerson, Prime Minister Justin Trudeau said he can't dictate whether it's appropriate for a specific place to carry a name, but acknowledged further conversations are needed.

"The decisions on who we commemorate and how we commemorate them are decisions that we have to take through careful reflection and open and difficult conversations in our communities and in our society," he said.

This report by The Canadian Press was first published June 4, 2021.

Note to readers: This is a corrected story. An earlier version incorrectly said the Egerton Ryerson bust outside the Opposition leader's office at the legislature was moved down the hall. In fact, that bust was placed in storage and a second bust remains on display.