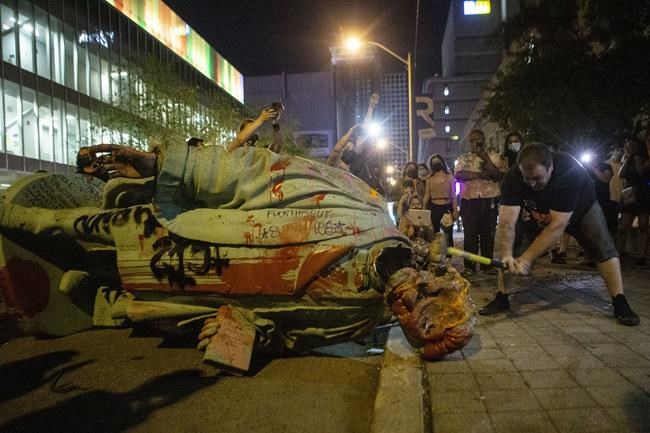 TORONTO — A Ryerson University task force reviewing the legacy of the school's namesake said Monday it would not speed up its work despite calls for immediate action and the toppling of a Egerton Ryerson statue on the campus over the weekend.

Demonstrations and calls for the university to change its name have ramped up in recent days following the discovery of what are believed to be the remains of 215 students buried in unmarked graves on the grounds of a former residential school in Kamloops, B.C.

"Despite the urgency expressed by some this week for immediate change, it is vital that we respect our commitment to the community for a transparent process," co-chairwomen Joanne Dallaire and Catherine Ellis said in a statement.

"Only by following the process we laid out can we ensure that the community has the information necessary to understand the recommendations we put forward."

The task force was struck in November 2020 to complete "detailed and expert" historical research on the life of Ryerson and his legacy.

The school asked the group to consult students, faculty, staff and alumni on steps to address the legacy and principles to guide commemoration decisions.

The task force started work in March, wrapping up consultations in mid-May. It is still reviewing submissions from more than 6,000 respondents, the university said recently.

Ryerson is considered an architect of Canada's residential school system. On Sunday night, protesters pulled down a campus statue of the man. Demonstrators splattered the statue with paint, cut off its head, then carried it to the lakeshore where they lowered it by rope into the water.

Toronto police said the incident was under investigation.

The task force said it would make recommendations regarding principles of commemoration and the university's name before the fall semester. The statue has been part of the work.

"With the statue removed, there may be regrets that the many students, faculty, staff and community members who have worked tirelessly towards its removal were not offered the opportunity to witness the moment it came down," the chairwomen said.

"The absence of the statue does not reconcile Egerton Ryerson’s legacy, and so we will continue our work."

University president Mohamed Lachemi said the statue was felled about an hour after the end of a protest against the university's use of Ryerson's name. He said the likeness would not be restored or replaced.

"Their work is now more important than ever," Lachemi said of the task force. "I ask our community to respect their work and to engage with them, as we should engage with all matters at our university, through dialogue, debate and the exchange of ideas."

Last week, Indigenous professors at Ryerson University asked the school to change its name and remove the statue because of his role in the creation of Canada's residential school system.

In a letter, co-signed by 17 professors, the group called on the university to address concerns the Indigenous community and students had expressed for decades about Ryerson's legacy.

Indigenous students in an open letter last month called on their peers, faculty and alumni to stop using the name "Ryerson" in email signatures, correspondence and on resumes to send a message, instead calling the school "X University."

The university's school of journalism said recently it would rename two of its publications ahead of the new academic year: the Ryerson Review of Journalism magazine and the Ryersonian newspaper.

This report by The Canadian Press was first published June 7, 2021.