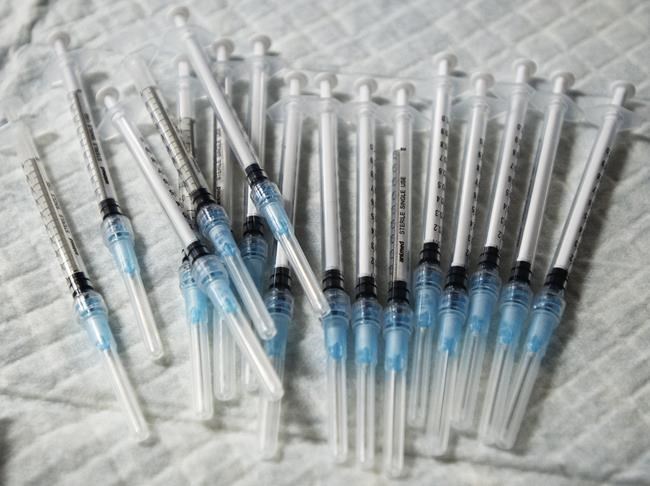 OTTAWA — Canada paid a premium to get more than 250,000 doses of the Pfizer-BioNTech vaccine delivered last December, weeks earlier than planned.

The detail is contained in heavily redacted contracts released to the House of Commons health committee late Friday, but any specifics on what price was paid or how the delivery schedule was amended were deleted before the contract was published.

Canada reached a deal with Pfizer in July 2020 to buy at least 20 million doses of the COVID-19 vaccine it was developing with German-based BioNTech. The first contract was signed on Oct. 26.

Pfizer Canada CEO Cole Pinnow told The Canadian Press in February that Canada's negotiations were based on an expectation the first vaccines wouldn't be authorized for use until late January at the earliest, and deliveries were planned to start after that.

But within a month of the contract being signed, Health Canada's chief medical adviser, Dr. Supriya Sharma, was signalling that her department was about two weeks away from giving the vaccine the green light.

That appears to have sent Canada racing back to Pfizer to see if its contract could be amended to get some doses delivered early. On Dec. 4, Canada and Pfizer signed an amendment allowing for that, but at a cost.

"Whereas (the) purchaser has requested, and Pfizer has agreed .... to amend the delivery schedule so that a certain number of contracted doses are delivered prior to Jan. 1, 2021 and in consideration thereof the parties have agreed to increase the price contracted doses which are delivered prior to Jan. 1, 2021," the contract says.

Every detail in the contract related to the price paid for dose was deleted before the documents were made public.

The contract with Pfizer stipulated nothing would be shipped until Health Canada had authorized the vaccine, which happened on Dec. 9. The first shipment of 30,000 doses was on a plane to Canada within days and the first Canadian was vaccinated on Dec. 14.

Ultimately, Pfizer shipped 255,450 doses before Jan. 1. It has since delivered more than 22.5 million shots, and its vaccine has become the main component of Canada's effort to get all 38 million residents immunized against COVID-19.

The specifics of what Canada paid for the 250 million doses of vaccine it pre-purchased have been hard to come by. The 2021 budget released in April said the total was somewhere around $9 billion.

The only cost per dose revealed so far was released by accident when the price for the Oxford-AstraZeneca vaccine was accidentally left in an email included in a package of documents released to the health committee. That email said Canada would pay $8.18 per dose of Oxford-AstraZeneca, which would amount to $163 million for the 20 million doses ordered.

The Pfizer contract was one of eight quietly shared with the health committee Friday, which is studying Canada's COVID-19 response and has requested numerous documents from the government as a result. It is the first time Canada has provided any details of its contracts, but there are a lot of blank pages and deleted details, including all information related to price or delivery schedules.

Procurement Minister Anita Anand has repeatedly said the contracts contained confidentiality clauses that prevented her from releasing them, adding she wasn't going to violate those clauses and risk jeopardizing Canada's vaccine supply.

"After months of dogged work the opposition finally got Canada’s vaccine contracts," he said on Twitter. "Predictably, Liberals released them late on a Friday with barely a week left in the session. Predictably, they redacted them in violation of the House Order."

The contracts do contain some previously unknown details, including the premium for early doses of Pfizer, and the fact that Canada is allowed to donate doses from five of the suppliers to other countries or international aid organizations such as the World Health Organization or the COVAX vaccine alliance.

There is no mention of donating doses from Pfizer or Moderna, but it is allowed for AstraZeneca, Johnson & Johnson, Novavax, Medicago and Sanofi. The contracts also suggest Canada can resell or ask the company to find other buyers for doses from J&J, Novavax and Medicago.

Prime Minister Justin Trudeau is expected to make an announcement at the G7 leaders' summit in England on Sunday saying Canada will donate up to 100 million doses of vaccine to other countries, but it's not clear yet how many of those would come from supplies initially destined for Canada.

Canada will have almost 50 million excess doses of the four vaccines it has approved, and potentially 124 million more from Sanofi, Medicago and Novavax if they complete their Phase 3 clinical trials successfully.

Almost two-thirds of all Canadians are now partly vaccinated, and more than one in 10 are fully vaccinated. Canada is expecting enough doses to vaccinate every Canadian fully by the end of September.

This report by The Canadian Press was first published June 12, 2021.