On This Day in Canada’s Political History: Massey Hall Opens in Toronto

While many others can describe the importance of Massey Hall to Canada’s musical history, I prefer to recall the political moments that occurred on that stage over many decades.  The hall opened on this date in 1894 and so many of Canada’s ensuing political giants made their mark there.  These include Sir Wilfrid Laurier (who promised his audience that the 20th century would be Canada’s), Sir Charles Tupper, a youthful Paul Martin Jr., Bob Rae and many more.

Below is an article I wrote for the Toronto Star a few years back that describes the rich political history of Massey Hall.

As we saw on Oct. 19, politicians come and go. Prime ministers can enter campaigns all-powerful only to learn they are anything but. New prime ministers and party leaders might soon take their place.

But in all the swirling change of Canadian politics, there are rare constants.

Toronto’s Massey Hall is one of those constants. Sir Wilfrid Laurier promised there that the 20th century would be Canada’s. John Diefenbaker began his first successful quest for the keys to 24 Sussex Drive from her stage. A future prime minister found himself spending a night in a Toronto jail cell after an election rally on site. Bob Rae’s reputation for rhetorical wit and skill was cemented behind her historic walls. And one unfortunate national party leader had one of his key Toronto supporters die at the very spot at a long-ago rally.

In October 1904, Laurier addressed a Massey Hall audience, his address destined for the history books.

In the same era, Laurier’s first opponent was Sir Charles Tupper. At one of Tupper’s Massey Hall rallies in 1896, the gods weren’t smiling on the Nova Scotian.

It was June 19, 1896, and Tupper had arranged for a variety of warm-up speakers to speak to Torontonians before him. One of them was John Beverley Robinson, 75, a former lieutenant-governor of Ontario. Robinson, however, never made it to Massey Hall’s stage.

“He was taken, somewhat faint while passing from his carriage to the ante-room, and sat down while Sir Charles Tupper … went on the platform,” a reporter wrote. “Mr. Robinson died a moment later, being seized with an apoplectic fit. Sir Charles Tupper was not made aware of Mr. Robinson’s death until after the meeting.”

Keeping Tupper in the dark was probably a good thing. The Tory leader was heckled by Liberal rabble-rousers planted in the Massey Hall audience.

Outside of a Massey Hall Liberal rally decades later, in 1958, a future prime minister learned the pitfalls occasionally found while exercising free speech during a campaign.

A group from the University of Toronto attended the rally. Full of excitement, they ended up on Yonge St., drawing the attention of a Toronto police officer (a Conservative?).

The cop ordered them to disperse. This angered one student and he stepped forward and bravely (stupidly?) defended Liberalism and participatory democracy. Writing years later, he described how well this went.

“In a moment of stirring street oratory (I) declared that this was a free country, and that we had the right to free speech, and that there were a couple hundred university students standing courageously behind me in defence of our Liberties…‘We’re not moving. We’re staying right here. You can’t make us go.’

“ ‘Well, that’s fine,’ he (the officer) replied. ‘We’re bringing the paddy wagons and you can all come downtown and explain it to the judge.’ ”

Paul Martin Jr., age 19 and son of Liberal MP Paul Martin Sr., then turned around to discover his colleagues had melted away. Martin Jr., as he recounted in his memoirs, was taken away and spent the night in jail before being freed the next day by the judge.

Progressive Conservative leader Diefenbaker had had a much better evening at Massey Hall only a few months before. Diefenbaker launched his national campaign there on April 25, 1957.

During his address, Diefenbaker invoked the greatest Canadian campaigner of them all, Sir John A. Macdonald.

“I believe that if this nation is to have a new birth of unity and freedom, we must go back to the vision and the idealism of Canada’s first nation builder,” Diefenbaker said. “He led the way — Macdonald did, to national tolerance, dignity and unity, as he joined with Cartier in brotherhood and in faith. My pledge, on behalf of this party, will be to do my part to achieve one Canada.”

And you can’t forget the NDP. During the 1980 election they, too, held a rally at Massey Hall. One of the speakers was delivered by a young MP with a great future before him.

“This election is about trust,” Rae said. “It is about honesty … It is about consistency.”

At that moment, and in the finest of Massey Hall’s political traditions, Rae was interrupted. A man, described as an “old geezer” by journalist Richard Gwyn, shouted “whoa.”

“And it’s about humour,” he said, earning great applause from the audience.

Welcome to Massey Hall, Toronto’s — and Canada’s — political shrine. While prime ministers come and go, she still remains the same. 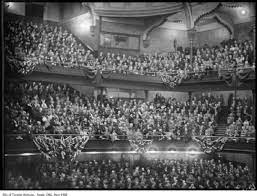