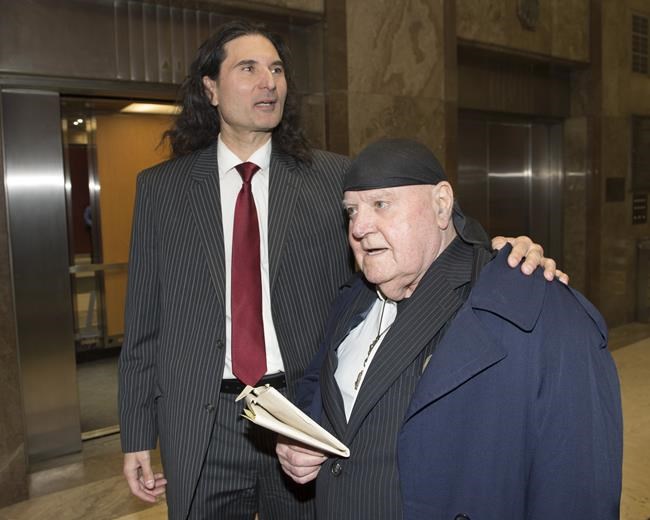 TORONTO — Two men in charge of an extremist publication lost their appeal Monday of a conviction for promoting hatred against women and Jews, with the judge also upholding their sentences.

In his ruling Ontario Superior Court Justice Peter Cavanagh rejected arguments from James Sears, editor of Your Ward News, and its publisher, LeRoy St. Germaine, that the trial judge had made numerous errors or shown bias.

"The 22 issues of YWN provided the evidence needed for (the judge) to reach conclusions on whether the statements in YWN promoted hatred against identifiable groups," Cavanagh said.

"I do not accept the appellants' submissions that the trial judge's reasons are insufficient or that the verdicts are unreasonable because (he) misapprehended the evidence or submissions of counsel."

Trial evidence was that the free publication was distributed over three years to more than 300,000 homes and businesses in the Toronto area as well as online.

The publication consistently portrayed women as inferior and as inviting rape. It also promoted tropes of Jews drinking the blood of Christian children and denied the Holocaust occurred. Those themes continued even after the trial started.

In January 2019, Ontario court Judge Richard Blouin, now retired, convicted the two men of two counts of promoting hatred. He later sentenced Sears, 57, to one year in jail — six months on each count — and St. Germaine, 79, to one year of house arrest.

Blouin said he would have handed Sears a much stiffer sentence had the law allowed.

"Mr. Sears ... promoted hate to a vast audience in an era where online exposure to this material inexorably leads to extremism and the potential of mass casualties," Blouin said at the time.

Sears argued on appeal that his trial lawyer, Dean Embry, was incompetent and had essentially "thrown the case" by, among other things, refusing to call a notorious antisemite and Holocaust denier as a defence witness.

Cavanagh also sided with Blouin's refusal to allow Sears to challenge the constitutionality of the hate law, which the Supreme Court of Canada has previously upheld.

In upholding the sentences, Cavanagh said they were neither demonstrably unfit nor were wrong in principle. The prosecution, he said, was well within its rights to push for consecutive rather than concurrent sentences on each count.

Cavanagh also noted the judge had taken into account St. Germaine's Metis status and poor health in handing him house arrest rather than a jail term.

Noah Shack, a vice president with the Centre for Israel and Jewish Affairs, said Sears had been able to promote antisemitic conspiracy theories, misogyny, homophobia, and racism in their "most grotesque forms" for too long.

"It is crucial that a clear message is sent to those who promote hate: You will be held accountable," Shack said.

Sears, who had been on bail, asked Cavanagh to give him more time before surrendering into custody to make arrangements for his young son. He also told court he had applied preemptively to the Court of Appeal for interim release pending further appeal.

Prosecutor Michael Bernstein objected to any delay in Sears' turning himself in.

"He needs to be ordered into custody today," Bernstein told Cavanagh. "He knew in February that the court would be rendering its judgment today. He had months to prepare.”

"Considering that I am being convicted on material dating back over six years, and the court took almost two years to rule on my appeal, it was only fair to give me a few days to get my affairs in order," Sears told The Canadian Press. "Our society is collapsing before our eyes. Jesus survived it and so will I."

This report by The Canadian Press was first published June 14, 2021.