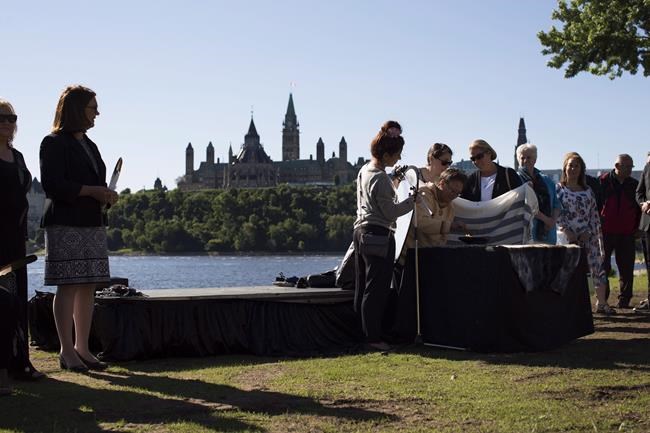 The normally colourful and celebratory day — which has been marked in Canada since 1996 — came on the heels of several weeks of emotional events that have highlighted the need to reform institutions and policies that perpetuate systemic racism and discrimination against Indigenous Peoples.

Prime Minister Justin Trudeau issued a statement celebrating the "vibrant and diverse cultures, languages and beautiful traditions of First Nations, Inuit, and Métis peoples," but he also acknowledged there is more work to do on reconciliation efforts because "saying sorry is not enough."

He pointed to the recent discovery of what are believed to be the remains of 215 children at the site of the former Kamloops Indian Residential School.

"We must never forget those innocent souls lost — this must be our collective commitment toward reconciliation," Trudeau said in his statement.

"We need to right past wrongs and address ongoing challenges, and we can only accomplish this with action."

But NDP Leader Jagmeet Singh accused the Liberal government of being "hypocritical" for saying it wants to make reparations for past sins against Indigenous people while continuing some actions that have sparked strong rebuke from Indigenous communities.

He pointed specifically to the ongoing legal challenge by Ottawa, which is asking the Federal Court to set aside two rulings by the Canadian Human Rights Tribunal rulings that found the federal government discriminated against Indigenous children by not properly funding child and family services.

"To me it really speaks of incredible hypocrisy that, on one hand at the federal level, we would celebrate National Indigenous Peoples Day, and on the other hand, we've got a Liberal government that's now fighting them and continues to fight these kids in court," Singh said.

A number of Indigenous groups also condemned Ottawa's action plan responding to the National Inquiry on Missing and Murdered Indigenous Women and Girls, calling the development process not consultative enough and the plan “fragmented.”

Inuk NDP MP Mumilaaq Qaqqaq did not mince words when she told the House of Commons that Monday should have been a celebration of Indigenous culture and history, but instead it filled with her with sadness and anger.

"This place pats themselves on the back while denying Inuit access to safe, livable space that keeps them alive. There is nothing, nothing to be proud of for Indigenous Peoples in this institution," she said.

"You should all feel extreme shame. I feel shame that Inuit are continuously being denied the right to live, the right to self-determination."

Bloc Québécois Leader Yves-François Blanchet stressed the importance of acknowledging historic truths, however painful, to help the process of healing for families and grieving for nations.

He successfully received unanimous consent for a motion calling on the federal government to fund the identification of other residential school burial sites and to investigate the potential presence of other remains of children across the country.

The federal government recently said it would make $27 million urgently available to locate and memorialize children in unmarked graves, money that was originally earmarked in the 2019 budget. Saskatchewan committed $2 million to support searches in that province last week and on Monday, Manitoba committed $2.5 million toward these efforts.

Across the country, political leaders and Canadians shared tributes to Indigenous Peoples and cultures and recognized the need to do more to take responsibility for wrongs perpetrated by the state against the First Peoples of this land.

Indigenous leaders, meanwhile, shared words of mourning and calls for greater accountability for those past wrongs.

Grand Chief Stewart Phillip said National Indigenous Peoples Day coming in the wake of the discovery in Kamloops highlights the "pain, trauma and hurt that continues to be inflicted by practices of colonialism."

Algonquin Anishinabeg Nation Tribal Council Grand Chief John Boudrias said he considers it positive that governments are now recognizing the mistakes of the past, apologizing and promising reconciliation, but without a real process to repair these mistakes — especially in the management of Indigenous territories — these remain "empty phrases."

“If Mr. Trudeau recognizes that he is in Algonquin territory when he is in Ottawa, he should also recognize that as the owner of this territory, the Algonquins have the right to participate in its management and benefit from it,” Boudrias said.

He also called on Quebec Premier François Legault to recognize that systemic racism exists against Indigenous people in his province.

In Eastern Canada, about 150 people gathered on the front lawn of the New Brunswick legislature in an event meant to convey the need for more "allyship" with First Nations.

St. Mary's First Nation Chief Allan Polchies Jr. offered prayers of healing to First Nations communities, especially to those that didn't have the opportunity to have closure — like the families of the 215 children.

"For many Canadians this was an eye-opener, a revelation that confirmed what Indian residential school survivors were telling us for centuries, but nobody was listening."

This report by The Canadian Press was first published June 21, 2021.

With files from Kevin Bissett in Fredericton, Kelly Geraldine Malone in Winnipeg and Beth Leighton in Vancouver