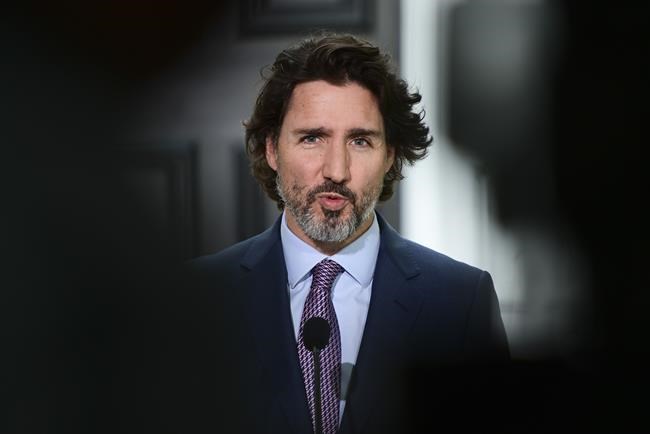 OTTAWA — As calls mount for the federal Liberals to do more to support Indigenous communities calling for independent investigations into deaths of children at residential schools, Prime Minister Justin Trudeau pledged Friday Ottawa would do "do what is necessary."

But he would not say exactly what that would look like, nor would he give a dollar figure beyond the previously announced $27 million allocated in 2019 to help identify and investigate burial grounds near residential schools.

"We will continue to give all the resources necessary to track down their loved ones, to give closure, to do what is necessary for those communities," Trudeau told the country Friday.

"But that is only a small part of what we need to do," he continued, listing off a number of areas in which the federal government has invested "billions upon billions of dollars in the past years and will continue," including on efforts to preserve Indigenous languages, culture and community ways of life.

"So yes, Indigenous communities have my commitment that they will get the resources necessary to recover and document as much as possible these kids in these graves. But they also have my commitment to be there on the healing and the fixing of the generations of trauma that Canadians have all too often turned an eye from."

Trudeau's comments come as the country continues to react in horror and grief over the discovery of two unmarked sites adjacent to former Indian Residential Schools where the remains of hundreds of children are believed to have been buried.

Cowessess First Nation in Saskatchewan announced Thursday that ground-penetrating radar indicated 751 unmarked graves at its school site. Last month, the Tk'emlups te Secwepemc First Nation said the same technology had detected what are believed to be the remains of 215 children at the Kamloops institution.

But while Trudeau and his Liberal ministers continue to pledge to put Indigenous Peoples at the core of any further search or identification efforts, leaders and Indigenous experts have been calling on Ottawa to take more direct steps.

Retired senator Murray Sinclair, the former chair of the Truth and Reconciliation Commission, is among those calling for an independent investigation to examine all burial sites near former residential schools.

He told a House of Commons committee earlier this month that such a probe should not be run by the federal government, but rather should be overseen by a parliamentary committee to ensure it is done in a proper way.

The United Nations Human Rights Office has also called on all levels of Canadian governments to investigate the deaths of Indigenous children at residential schools and to intensify efforts to find those who are missing.

Calling the discovery in Cowessess First Nation a "crime against humanity," Federation of Sovereign Indigenous Nations Chief Bobby Cameron called for a full, independent public inquiry into the "genocide" of Indigenous Peoples at these schools.

After spending six years studying and documenting the history of these institutions, the TRC found Canada's policy of tearing children away from their families and sending them to the schools for the purposes of assimilation amounted to a "cultural genocide." Many of the children were physically, sexually and emotionally abused. Many were starved and left untreated for illnesses. Their hair was often cut, their names were changed and they were not permitted to speak in their own languages.

Some survivors told the TRC they were made to dig the very graves now being discovered when their classmates died at the schools. Others relayed memories of priests fathering children with young female students and quietly spiriting the babies away.

Calls have continued for the Vatican to issue a formal apology for the Catholic Church's role in running many of these government-funded, church-operated institutions — so far to no avail.

Trudeau is among those who have taken the pope to task for failing to apologize, but on Friday he took a more conciliatory tone. When asked what steps his government is considering when it comes to pushing the Catholic Church to apologize and hand over documents — including the possibility of revoking the church's charitable tax status — Trudeau demurred.

"I don't think we're going to get to anywhere near that level of conflict," Trudeau said.

"I know that the Catholic Church leadership is looking and very actively engaged in what next steps can be taken. We will continue to be there to work with them, to facilitate things and to encourage them to keep doing right by Canadians and Indigenous Peoples who are very preoccupied by this piece of history."

Meanwhile, Indigenous leaders say there are likely many more unmarked burial sites that have yet to be uncovered.

A number of Indigenous communities and First Nations are now working toward searching former residential school sites in Manitoba, Ontario and Alberta, with the help of provincial funds being made available in those provinces.

Trudeau said Friday the federal government will stand alongside Indigenous leaders and communities "every step of the way, as needed" in finding, identifying and memorializing the lost children of residential schools.

"My pledge to all Canadians is that we will put Indigenous Peoples and their wishes for their loved ones, for their communities, at the very core of whatever next steps we take."

This report by The Canadian Press was first published June 25, 2021.