Canada’s tragic residential-school reckoning could be grim harbinger for U.S. 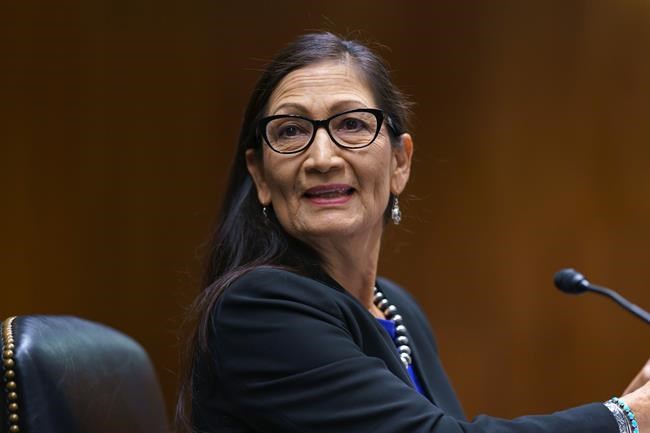 WASHINGTON — It took just two weeks for the first Indigenous cabinet member in American history to publicly express her deep personal dismay at the grim residential school revelations emanating from north of the border.

It was only another 11 days before Deb Haaland, one of the first Native Americans ever elected to Congress and President Joe Biden's newly appointed secretary of the interior, took matters into her own hands.

"The department shall undertake an investigation of the loss of human life and the lasting consequences of residential Indian boarding schools," Haaland wrote in a memo last week.

"Only by acknowledging the past can we work toward a future we are all proud to embrace."

In geopolitical terms, the time between Haaland's June 22 memo and May 27 — the day a B.C. First Nation announced the grim discovery of the remains of 215 children at a former residential school — was the blink of an eye.

Rarely do developments on Canadian soil prompt such rapid, dramatic policy decisions in the U.S., a telling measure of magnitude for what Haaland's investigation may uncover in a country where Indigenous issues are seldom considered front-page news.

"They don't teach this in schools — not in Canadian schools, not in American schools — that there are mass graves of children at church-run, government-sponsored residential schools and boarding schools.

"And now we're no longer able to hide from those truths."

"My great-grandfather was taken to Carlisle Indian School in Pennsylvania," Haaland wrote in a moving column in the Washington Post this month that opened with the news out of Canada.

"Its founder coined the phrase, 'Kill the Indian, and save the man,' which genuinely reflects the influences that framed these policies at the time."

It's a chilling echo of words frequently attributed to Canada's first prime minister, Sir John A. Macdonald — "take the Indian out of the child" — in his 19th century defence of Canada's residential school system.

The similarities between the systems that existed in Canada and the U.S. likely don't stop there.

"I think the scale, in terms of sheer numbers, is fairly comparable," said Circe Sturm, an anthropology professor and Indigenous issues specialist at the University of Texas at Austin.

By the turn of the century, after the U.S. Bureau of Indian Affairs had taken over Indigenous schooling from the Christian missionaries who started the effort, the department was operating 147 day schools and 81 boarding schools on U.S. reservations, and another 25 boarding schools off-reserve, Sturm said.

In Canada, an estimated 150,000 Indigenous children are believed to have attended one of about 150 residential schools that operated between the 1880s and when the last one closed in 1996.

Haaland's "Indian Boarding School Initiative" will seek to identify all of the schools that were part of the program, with a particular emphasis on "any records relating to cemeteries or potential burial sites … which may later be used to assist in locating unidentified human remains."

The department will also liaise with Indigenous communities across the U.S., including in Alaska and Hawaii, on how best to handle any such remains, with plans for a final report by April of next year.

"Many who survived the ordeal returned home changed in unimaginable ways, and their experiences still resonate across the generations," Haaland wrote.

"The work outlined will shed light on the scope of that impact."

The potential scale of the situation in Canada took a dramatic turn Thursday when the Cowessess First Nation announced the discovery of what are believed to be 751 unmarked graves at the site of the former Marieval Indian Residential School on southern Saskatchewan.

That news generated uncommon media interest Friday in the U.S., where the Post played it on the front page and the New York Times devoted a full inside page to coverage of the discovery, as well as Haaland's announcement.

Sturm demurred when asked whether she expects broad change in U.S. attitudes toward Indigenous Peoples on a scale comparable to last year's social upheaval in the wake of the death of George Floyd.

"I suspect that many Americans will struggle with the hard truth about the founding of this country — some by choosing to ignore it, others with guilt and anger," she said.

"But because we are talking about the senseless death of children, there is a good chance that a significant number of Americans would be moved enough to insist on action."

If such discoveries are what it takes to finally end public complacency about the plight of Indigenous Peoples in Canada, so be it, Prime Minister Justin Trudeau suggested Friday.

The federal government intends to help with "the healing and the fixing of the generations of trauma that Canadians have all too often turned an eye from, all too often shrugged away from," Trudeau said.

Indigenous leaders in Canada have been pressing Trudeau to secure an apology, on Canadian soil, from Pope Francis himself for the role the Catholic Church played in operating residential schools.

Those demands — which Trudeau repeated again Friday — have so far gone unheeded. But they may carry more weight if, in the fullness of time, Biden is in a position to join the call.

"I think Trudeau and Biden together is a stronger force than either of them alone. I do believe that," Iron Eyes said.

"We need those calls to come from within the Christian community, because those 'ideals' upon which these countries were founded were very much informed by Christian and Western theology and world views."

This report by The Canadian Press was first published June 27, 2021.