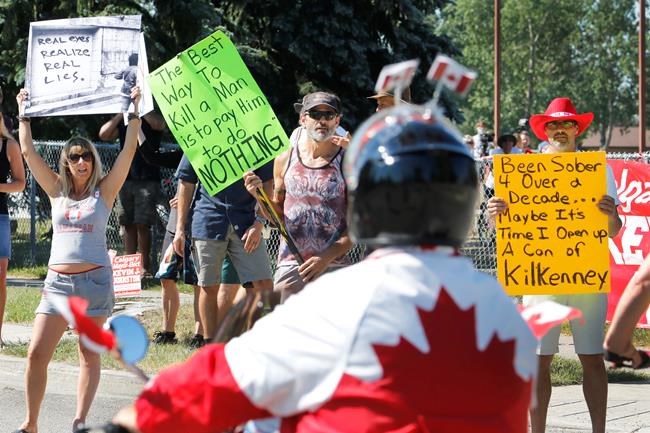 CALGARY — Protesters surrounded Alberta's health minister, his wife and two young sons Thursday at the conclusion of a Canada Day parade and a celebration of the lifting of most COVID-19 restrictions.

Tyler Shandro's wife Andrea was in tears and the minister held one of his sons close, putting his hands over his ears while a handful of protesters screamed profanities and insults.

"Lock Shandro up," yelled one man.

"You've destroyed thousands and thousands of Alberta lives," said another.

The abuse was directed at Shandro's sons as well.

"Sorry buddy but your father is a war criminal."

Shandro eventually handed his children over the chain link fence to onlookers.

"I took Tyler's son across the fence and brought him in here because he was crying. You don't do that to children," said Gary Vegelis.

"That's a lack of respect. Tyler, whether you agree with what he does or not doesn't matter. It's been tough on everybody. I've had friends who died during COVID and we're going to live through this. We're going to go on."

Shandro spoke briefly to reporters after the incident.

"I think obviously throughout the pandemic there's been a lot of high emotions from folks on both sides of the political spectrum."

Shandro spent a few moments after the event hugging his family.

"There's some anxiety on that, for them to hear people believing some of the misinformation about vaccines is unfortunate and to hear the way that it was expressed today was unfortunate."

Premier Jason Kenney took part in a short Canada Day parade before driving to deliver a few remarks and slap an Open for Summer sign on a banner.

A man and woman shouted profanities at him during his speech, putting their middle fingers in the air. The man warned two police officers not to touch him when asked to step back.

Vegelis approached the duo and told them their behaviour and language in front of children was unacceptable before being given the finger himself.

"You have the right to protest but with respect and dignity and we don't have that," he said. "The language they were using was inappropriate."

Alberta's reopening means no more caps on indoor and outdoor social gatherings, in restaurants, stores and places of worship. The entire province, with the exception of Calgary, is also lifting its mask mandate.

As the restrictions lifted, a group that's defending a Calgary pastor who has been in remand accused of flouting Alberta's COVID-19 health orders says he has been released.

The Justice Centre for Constitutional Freedoms said in a statement that Timothy Stephens of Fairview Baptist Church was let out of the Calgary Remand Centre early Thursday, where he's been since June 15.

The group also said chains have been removed from Fairview Baptist Church, as well as GraceLife Church near Edmonton, and that the buildings are being returned to their congregations.

GraceLife pastor James Coates spent a month in the Edmonton Remand Centre after he violated a bail condition not to hold church services that officials said were ignoring COVID-19 measures.

Some Albertans, like W.K. Lim, who was enjoying Canada Day at the Alberta legislature grounds with his family, and Brian Mappleback, who was also at the legislature, were still wearing masks and felt the removal of restrictions came too soon.

"More people are getting their second (vaccine) doses. I'll probably hold off over the next three weeks and see what happens," Mappleback responded when asked when he'd consider ditching his mask.

But Allie Voyageur, who was maskless while enjoying the sun in Edmonton on Thursday, said she was "very pumped" the restrictions were over.

"With the hot weather and everything, you can smell the fresh air, see everyone's smiles, and it's summertime, so it's very exciting," Voyageur said.

This report by The Canadian Press was first published July 1, 2021.