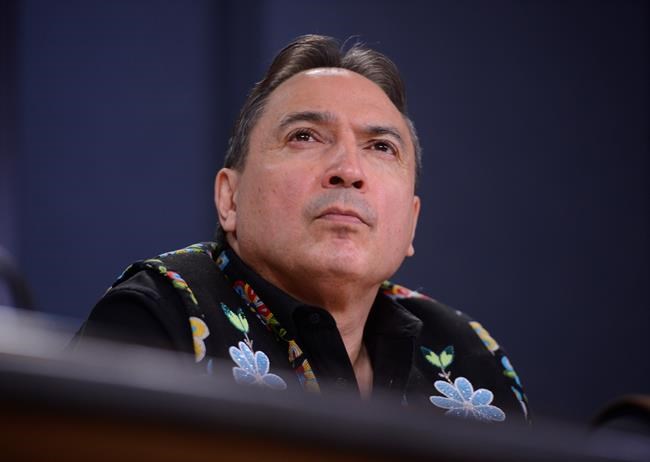 OTTAWA — Assembly of First Nations chiefs shared solemn words and prayers of mourning Tuesday for the Indigenous children who died in Canada's residential schools, striking a sombre tone at a virtual gathering that will culminate in the election of their new leader.

The AFN general assembly's normally ceremonial opening prayers by elders were interspersed Tuesday with statements of grief and, at times, anger at recent discoveries of unmarked graves at former residential schools.

Elder Garry Sault of the Mississaugas of the Credit First Nation shared his belief that First Nations chiefs must take this moment of reckoning to support their peoples and their communities through the sadness that has come with the confirmation of these burial sites, which were located by ground-penetrating radar in recent weeks.

"It's with sorrow that we have to greet this coming conference and find ways to testify on reconciliation with a government that seems not to care," Sault said.

"It's in this time we need chiefs that are strong so we can come together with one good mind so that we can bear our grief and our sorrow and turn it into a cry for justice for what happened to our people, for what happened to all of those children who were buried in the earth and are yet to be discovered. Our hearts cry out to them as they cry more and more."

Church-run, government-funded residential schools operated in Canada for more than a century, which some 150,000 First Nations, Métis and Inuit children were forced to attend after being removed from their families and communities.

The Truth and Reconciliation Commission's 2015 report, which concluded the residential school system amounted to cultural genocide, detailed the harsh mistreatment including the emotional, physical and sexual abuse inflicted on Indigenous children at the institutions, where many died. There are now more than 4,000 names on the student death register maintained by the National Centre for Truth and Reconciliation.

The widespread expectation that there will be more discoveries means the pain and re-traumatization for many is "real and it's going to get difficult," Ontario Regional Chief Glen Hare told the assembly.

"We have said loudly that our First Nations must take the responsibility to take care of our own children," he said.

"We are developing our own child well-being laws and it's time for the government to get out of the way. It is our responsibility, it is our jurisdiction."

Chief Stacey Laforme of the Mississaugas of the Credit First Nation noted the need for First Nations peoples to come together to help one another through this time of "hurt and anger."

He shared a poem he wrote for the children who never returned from residential schools.

"Time will tell their story. I will educate society so their memory is not lost. And when I am asked, 'What does reconciliation mean?' I will say I want their lives back. I want them to live, to soar. I want to hear their laughter, to see their smiles," Laforme said, reading from his poem.

"Give me that and I'll grant reconciliation."

Outgoing National Chief Perry Bellegarde was honoured as part of the opening ceremonies of the 42nd AFN annual general assembly Tuesday, ahead of a vote taking place Wednesday for a new national chief.

In a pre-recorded message, Bellegarde shared his appreciation for serving six years as leader and spokesperson for the advocacy organization’s 634 First Nations, encompassing more than 900,000 people.

"I have always believed that we will prevail by coming together in co-operation, in partnership in unity and ceremony, and from there development processes that unite, rather than divide," Bellegarde said.

Seven candidates are vying to replace Bellegarde as the next national chief, including three women. The AFN has never been represented by a woman.

A resolution calling for a delayed election was discussed at length Tuesday, with several chiefs raising concern about the inability for some of their counterparts in British Columbia to participate in the virtual proceedings due to evacuations caused by ongoing wildfires.

Some also raised concerns about connectivity issues for some remote First Nations as well as the fact that the AFN charter does not allow for online elections.

The resolution was eventually defeated, paving the way for the virtual vote for a new national chief to go ahead Wednesday.

Several ballots are expected before a winner is declared on Wednesday. A candidate must secure 60 per cent of votes cast to win. After each round of voting, the candidate with the fewest ballots will be eliminated until one finally receives 60 per cent support.

The Indian Residential Schools Resolution Health Support Program has a hotline to help residential school survivors and their relatives suffering with trauma invoked by the recall of past abuse. The number is 1-866-925-4419.