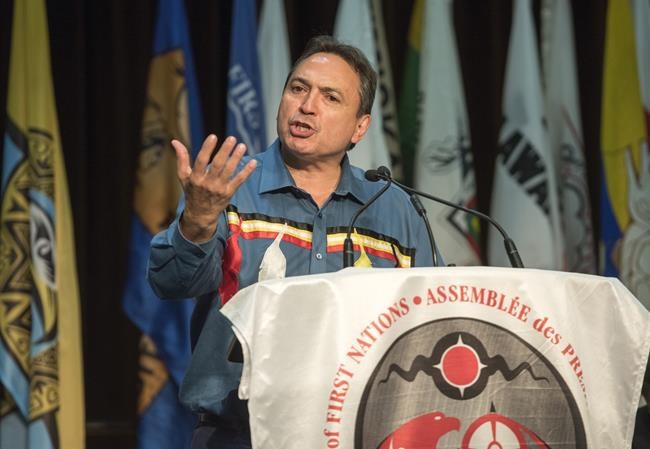 OTTAWA — The election for national chief of the Assembly of First Nations will go to a second day of voting and a fourth ballot after no candidates reached the necessary 60 per cent threshold to claim victory.

The final two candidates left in the race are Reginald Bellerose of Saskatchewan and RoseAnne Archibald of Ontario after three rounds of virtual voting for seven initial candidates that began Wednesday afternoon.

Both candidates were in a virtual dead heat after the first two rounds of voting, but Bellerose pulled slightly ahead of Archibald on the third ballot with 40 per cent of votes cast.

Archibald, meanwhile, just 15 votes away, stood at 36 per cent support.

Jodi Calahoo Stonehouse from Alberta received the lowest number of votes after the third ballot and was automatically eliminated from the race.

Meanwhile, the third-place finisher, Nishnawbe Aski Nation Grand Chief Alvin Fiddler, voluntarily withdrew from the race and encouraged his supporters to vote for Archibald on the next ballot.

“Even though it's a difficult decision (to withdraw) it was the right one,” Fiddler told the virtual assembly Wednesday night.

After seeking advice from his daughter and from local elders, Fiddler said he believes the time has come for a woman to lead the national advocacy organization for the first time in its history.

“I think that is something that we should all be sharing and telling our daughters and our granddaughters that they can hold these offices," he said. "So I would ask all those who have been with me to join me to support RoseAnne so that she will be our next national chief, the first-ever woman national chief.”

Calahoo Stonehouse also endorsed Archibald for national chief, saying she hopes a “matriarch” will take over the position — a national leadership role that acts as the voice of 634 First Nations, encompassing more than 900,000 people.

Archibald, who is from Taykwa Tagamou Nation and is the outgoing regional chief for Ontario, has been involved in First Nations politics for 31 years. She was the first woman and youngest chief elected to represent her home nation at 23 and went on to also become the first woman and youngest deputy Grand Chief for Nishnawbe-Aski Nation in Ontario.

She campaigned on a platform to build a solid post-pandemic recovery plan for First Nations, to increase the involvement of women, youth and 2SLGBTQQIA+ peoples in the AFN's political processes, and to support and co-ordinate community-driven solutions to move First Nations beyond reliance on federal dollars toward economic self-sufficiency.

Archibald has also pledged to work with governments to implement the Truth and Reconciliation Commission's 94 calls to action, with specific goals of creating community-driven solutions for healing, similar to the former 'Aboriginal Healing Foundation' and to work with nations and survivors to establish memorials to those lost to residential schools.

Bellerose is also a familiar name in First Nations leadership. He has been serving as Chief of Muskowekwan First Nation for the last 17 years

He identified his top three campaign priorities as rights and jurisdiction, economic sovereignty and health and wellness.

Bellerose is also promising to launch a national discussion focused on establishing a First Nations economy that capitalizes on Indigenous rights, lands and jurisdiction to secure new markets nationally and internationally.

He believes the existing "colonial health system" has failed First Nations and that Indigenous Peoples should develop their own models of care.

Earlier in the day, Former Tsuut’ina First Nation chief Lee Crowchild of Alberta and Cathy Martin of the Listuguj Mi’gmag Nation in Quebec were both eliminated after the first round of voting.

Outgoing regional chief Kevin Hart from Manitoba was eliminated after the second ballot and threw his support behind Bellerose.

"Our unity is being questioned ever so more right now. We need to come together at the end of the day, it doesn't matter where we live," he said.

Hart was not the only person raising concerns about the voting process.

An attempt to put off the election was made Tuesday during the opening day of the AFN's 42nd annual general assembly.

A number of chiefs said they were troubled by the inability of chiefs in British Columbia to participate in the assembly due to evacuations caused by ongoing wildfires.

Others also raised concerns about connectivity issues for some remote First Nations as well as other impediments caused by the ongoing COVID-19 pandemic.

The resolution calling for a delayed vote was eventually defeated. But some members say they are concerned the results could be challenged because, while this resolution did receive the 60 per cent support needed to pass, only about 20 per cent of eligible members of the AFN actually cast ballots Tuesday.

Every chief, or their designated proxy, for each First Nation with membership in the AFN is entitled to one vote.

Voter turnout was higher for the national chief elections Wednesday, with between 367 and 351 members casting ballots in the first three ballots — which accounts for over half of eligible voting members.