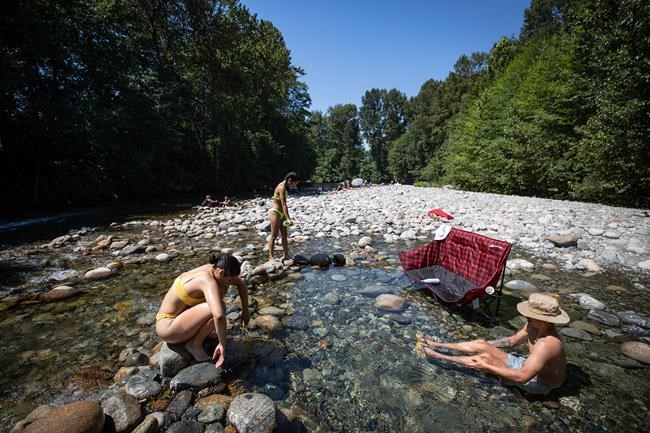 A recent heat wave in Western Canada that blew past records and contributed to hundreds of deaths could not have happened without climate change, an international group of scientists has concluded.

And even if the world meets greenhouse gas reduction targets, weather that saw temperatures crest to 45 C in many parts of British Columbia could reoccur every five to 10 years, the World Weather Attribution group said in a paper released Wednesday.

"An event of this extremity would have been virtually impossible in the past," said co-author Sarah Kew of the Royal Netherlands Meteorological Institute. "But we are going to be seeing more intense and more frequent heat waves in the future."

The end of June and early July saw unheard-of temperatures across B.C. and Alberta. The community of Lytton, B.C., reached nearly 50 C and was engulfed days later by a wildfire.

During the heat, sudden and unexpected deaths tripled in B.C. to 719 and weather is believed to have been a significant contributor.

"We've never seen a jump in record temperature like the one in this heat wave," said Geert Jan van Oldenborgh of Oxford University. "These are incredibly high temperatures for these fairly temperate regions."

Faron Anslow of the University of Victoria said several factors contributed to the crushing heat: a dry spring, a lingering ridge of high pressure over the region and a low pressure system off the Pacific coast that pulled heat from east to west.

"That put the icing on the cake," he said.

But analysis using 21 different climate models and advanced statistical tools showed those factors wouldn't have been enough on their own to push the mercury so high. Climate change, the paper concludes, made the heat wave 150 times more likely.

In fact, records were broken by such a wide margin that the scientists suggest two possibilities.

The first is that the heat was just bad weather luck, a combination of events that will remain rare — although less rare than before. The second is that the climate has crossed a new threshold, with an as-yet-unknown feedback loop pushing temperatures past what was previously believed possible.

"At the moment, we just don't know whether this is true or not," van Oldenborgh said.

"Everybody's really worried about the implications of this event. Nobody saw this coming."

Co-author Kristi Ebi of the University of Washington said heat waves will be a major public health issue as climate change continues. The toll includes health problems and deaths directly related to heat as well as other conditions such as heart problems or respiratory diseases that are worsened by it.

"Almost all of the deaths are preventable," she said. "People don't need to die in heat waves.

"The possibilities for prevention are critically important to address."

The current paper brought together 27 scientists from eight countries. Although it has not yet been published, the authors say it will be submitted for peer review and publication in the near future.

Although scientists used to be reluctant to link climate change with any specific weather event, that has begun to change.

The World Weather Attribution group has done dozens of such studies. The climate news website Carbon Brief has also tracked 350 peer-reviewed studies from around the world that consider human fingerprints in extreme weather.

Climate models are better, statistical methods have improved, computers are more powerful — and climate change is just that much more unmistakable, said Fredi Otto of Oxford.

"All this coming together allows us now to link individual weather events to climate change."