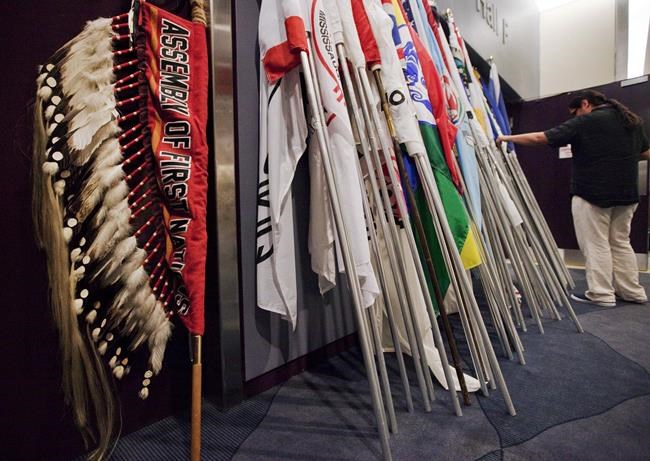 OTTAWA — RoseAnne Archibald of the Taykwa Tagamou Nation in Ontario has become the first woman to serve as national chief of the Assembly of First Nations.

"The AFN has made her-story today," she said Thursday, using a play on words to outline the historic win.

"Today is a victory, and you can tell all the women in your life that the glass ceiling has been broken. And I thank all of the women who touched that ceiling before me and made it crack. You are an inspiration to me."

Archibald secured victory after her rival, Reginald Bellerose, who has been serving as Chief of Muskowekwan First Nation in Saskatchewan for the last 17 years, conceded.

The election had stretched to a second day and went to a fifth round of voting after neither Archibald nor Bellerose received the necessary 60 per cent of votes to win.

That remained the case when the AFN announced the fifth-ballot results Thursday evening, but Bellerose then withdrew from the race before a sixth round of voting could begin.

In an effort to unify the organization, Archibald made a point in her speech to reach out to the seven candidates who ran against her for the job. The AFN represents 634 First Nations with 900,000 members.

Describing them as akin to "competitive siblings," she called the other candidates brave and applauded them for wanting to serve their communities and First Nations across the country.

She also thanked all the chiefs who voted in the AFN election, even those who did not vote for her, saying she has learned from their guidance and ideas.

"While there are things and differences that divide us, there is much that we share," she said.

"We all want our children to grow up proud and surrounded by love, culture, ceremony and language and safe and vibrant communities. We want a mother earth for them that is not threatened by wildfires and climate change and wildfires and a warming planet. We want to be good ancestors and leave a strong legacy for the seven generations ahead."

She campaigned on a platform to build a solid post-pandemic recovery plan for First Nations, to increase the involvement of women, youth and LGBTQ and two-sprit peoples in the AFN's political processes, and to support and co-ordinate community-driven solutions to move First Nations beyond reliance on federal dollars toward economic self-sufficiency.

Archibald has also pledged to work with governments to implement the Truth and Reconciliation Commission's 94 calls to action, with specific goals of creating community-driven solutions for healing, similar to the former 'Aboriginal Healing Foundation' and to work with nations and survivors to establish memorials to those lost to residential schools.

"We are going to stare this straight in the face and kick colonial policies to the curb. Change is happening."

In his concession speech, Bellerose said he felt the tide was against him because the AFN chiefs had decided against two back-to-back leaders from Saskatchewan.

Outgoing national chief Perry Bellegarde is from Little Black Bear First Nation in the southern part of the province.

While he admitted he is disappointed, Bellerose also made a point to say he ran a clean campaign, making veiled references to social media posts and comments by other chiefs that may have suggested otherwise.

This report by The Canadian Press was first published July 8, 2021.