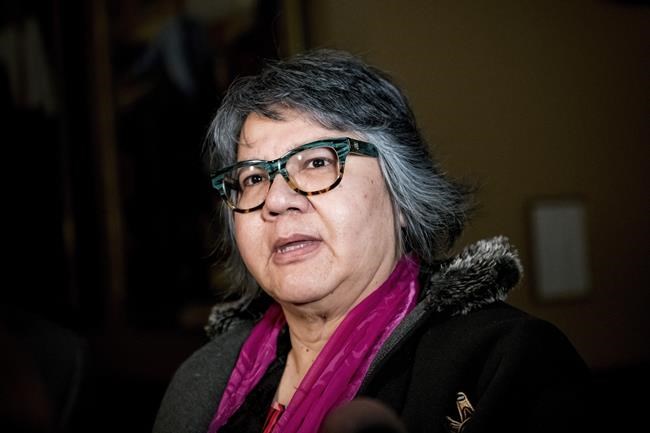 OTTAWA — In her home community of Taykwa Tagamou Nation in northeastern Ontario, surrounded by family and friends, RoseAnne Archibald was about to deliver the oath of office as newly elected national chief of the Assembly of First Nations Thursday when she suddenly began to giggle.

The solemn ceremony, held virtually because of the COVID-19 pandemic, was interrupted by messages popping up on her smartphone, which was being used to broadcast her oath and victory speech across the country.

"I'm getting too many text messages from people, it's interfering with my oath of office," Archibald said as she laughed, handing her phone to an aide so she wouldn't have to hold it herself while delivering her remarks.

Archibald's authenticity in that moment reflects the kind of leader she says she wants to be as the first female leader of the AFN, an advocacy organization representing 634 First Nations.

She is pledging to hold governments' feet to the fire in making sure the needs and priorities of First Nations people in Canada are at the forefront of national dialogue and action.

But the new leader also harshly criticized the way the AFN has been run in the past, and is promising to make the organization more inclusive and transparent.

She also says she will approach this transformational work in her own kind and respectful way.

"I have the ability to create space that is respectful and kind to other leaders and at the same time, hold them to account. I'm holding two spaces within me," she said at a news conference Friday.

"I know that with that heart-centred approach, together with any government we can move the yardstick, we can create quantum leaps of change and that's my plan."

Archibald secured her electoral victory late Thursday after two days and five full rounds of voting. The race was about go to a sixth ballot before the last of Archibald's six rivals for the job, Reginald Bellerose, chief of Muskowekwan First Nation in Saskatchewan, conceded.

As the first woman to hold the job of national chief, Archibald says it has been a long and often bumpy road to get here.

The secretariat for the AFN, which oversees the business and operations of the organization, is still also called the 'National Indian Brotherhood,' she noted when asked why it's taken so long for a woman to assume leadership of the AFN.

"It's things like that create a feeling that there isn't a place for women," she said. The negative experiences of national female politicians such as Jody Wilson-Raybould and Catherine McKenna can also often discourage women from seeking higher office, she added.

"These attacks on women don't create safe spaces for women. But it's changing," she said. "It's important that 80 per cent of the chiefs across Canada are men and they elected me. And that, to me, speaks to the change that is happening: that our brothers understand the importance of creating space."

Over the next 100 days, Archibald plans to focus on key issues such as unmarked burial sites at former residential schools, the national action plan on missing and murdered Indigenous women and girls and fighting systemic racism in the health and justice systems.

She also plans to prioritize climate change's effects on Indigenous communities — such as the wildfires ravaging First Nations in British Columbia — and will work with governments and regional chiefs on a post-pandemic recovery plan for First Nations.

Asked about an internal investigation the AFN launched into allegations of harassment against her earlier this year, Archibald said she couldn't discuss specifics because of confidentiality.

But she did say she was never interviewed as part of that probe. She also said she believes it was relating to her having raised concerns about allegations of harassment and bullying of women, LGBTQ and two-spirit people at the organization — something she says will not happen under her watch.

"I knew that because I spoke out that there would be retaliation … but I kept walking forward because I believe in the truth," she said.

"I felt like a whistleblower when I brought those issues forward."

Because of this, Archibald says she supports a whistleblower policy for the AFN. She also plans to address concerns she's heard about the AFN being "opaque" in financial matters.

"I ran for national chief to bring better, more inclusive governance to the AFN, one that puts an emphasis on creating safe and healthy workplaces for all people, protected and respected, no matter what."

This report by The Canadian Press was first published July 9, 2021.