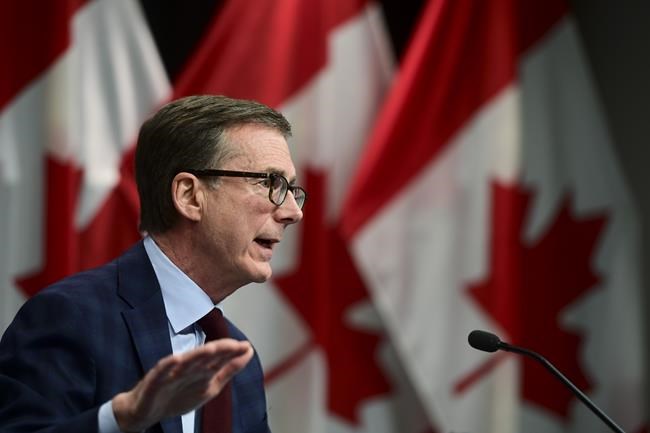 OTTAWA — The Bank of Canada says the domestic economy will grow at a slightly slower pace this year than it previously thought and expects the risks from COVID-19 to wane — but not enough to change its trendsetting policy rate.

The reason for the shift is a weaker first half of the year than the bank expected as the economy was hampered by lockdowns and restrictions.

With public health restrictions partially or entirely lifted across the country, the central bank now expects consumers to start spending more, including from some of the estimated $200 billion in savings Canadians accumulated during the pandemic that officials previously hadn't worked into their forecasts.

The bank’s updated economic outlook also said spending shouldn’t be affected by a decline in federal aid as it expects more people to get back to work, meaning they earn more and offset declines in government assistance.

"The reopening of the economy and the strong progress on vaccinations have given us reason to be more optimistic about the direction of the economy," governor Tiff Macklem said in his opening statement at a late-morning press conference. "But we are not there yet, and we are mindful that the process is likely to be bumpy, and some scars will remain."

As a result, the bank kept its key policy rate on hold at 0.25 per cent on Wednesday, where it has been since the onset of the pandemic. The bank said it will keep the rate at near-zero until the economy is ready to handle an increase in rates, which it doesn't expect to happen until the second half of 2022.

The central bank also said that economic conditions have improved enough to allow it to reduce its weekly purchases of federal bonds to $2 billion from $3 billion. The purchases are a stimulus measure, known as quantitative easing, designed to help drive down rates charged on mortgages and business loans.

"With the economic recovery strengthening on the back of easing public health restrictions, it was a prudent move by the Bank to remove some policy support," said TD senior economist Sri Thanabalasingam.

Macklem said the pace of purchases should slow over time if the economy recovers broadly in line with the bank's outlook, but future changes will be gradual and deliberate.

BMO chief economist Douglas Porter said he expected the bank to wind down the quantitative easing program by early next year, which would set the stage for rate hikes likely within the ensuing 12 months.

In the scenario the bank laid out Wednesday, inflation runs above three per cent for the rest of the year because of higher gasoline prices and service businesses raising prices as demand returns. Inflation also stays above the Bank of Canada’s two-per-cent target next year and in 2023 because of excess demand before coming back to target in 2024.

Macklem said the factors pushing up inflation are likely to be short-lived, but that the bank will watch them closely in case they become persistent or grow.

"What we're seeing are some sharp movements in prices, but that doesn't look like inflation — it's unlikely to cause ongoing price increases," he said.

One reason the bank plans to let inflation run hot is because the country’s labour market needs to hire roughly 550,000 people just to reach pre-pandemic employment levels. Macklem said the pace at which those jobs are recovered will vary by industry, and it could take some businesses, such as restaurants, a bit more time to fill positions.

"One of the things we are learning more about is it's a lot easier to close an economy than it is to reopen one, and particularly in some sectors demand can rebound faster than supply can keep up," he said.

This report by The Canadian Press was first published July 14, 2021.