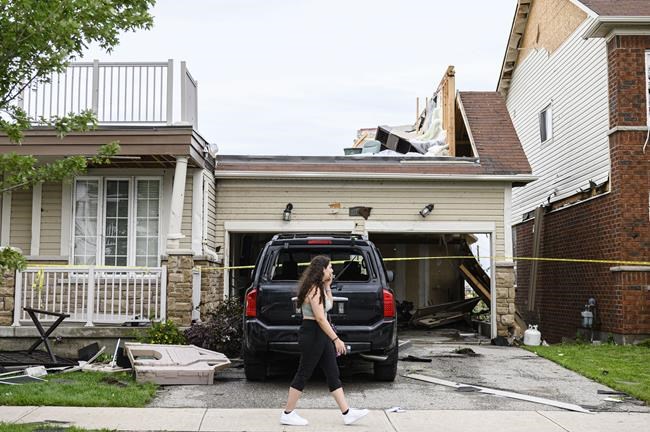 BARRIE — Several people were injured and many more were displaced Thursday after a tornado ripped through part of a southern Ontario city, its mayor said as he expressed relief that no lives had been lost in the destruction.

Barrie Mayor Jeff Lehman said that while the tornado that hit a neighbourhood in the city's south end caused extensive property damage, as of Thursday evening, no deaths were reported and no one appeared to be unaccounted for.

"I can't tell you how incredible it is that nobody has been killed, and I hope that as all the secondary searches are completed and the patients are treated in the hospital, that that continues to be the case," he said.

"Because this certainly could have been a much more serious disaster."

Paramedics said eight people were taken to hospital, including four who suffered serious injuries. Seven of those hospitalized were being treated for trauma and one for a medical condition, they said.

Others who suffered more minor injuries were treated at the scene, said Andrew Robert, the chief of paramedic services.

Emergency crews continued to go door to door to check on residents in the hours following the tornado, and urged all others to stay away from the area, which spans five or six streets.

Fire officials said up to 25 buildings suffered significant damage, with roughly 20 considered uninhabitable at this time and two or three "completely destroyed."

"The damage is catastrophic, it is significant, it is major," Leon said.

The tornado tore through Anita Heyworth's neighbourhood, ripping up her fence and carrying her backyard trampoline away as she pulled into her driveway with her six-year-old daughter, 16-year-old son and 70-year-old mother in tow.

"I saw the funnel cloud with my trampoline in it and I saw it go down my street, and I'm yelling, 'duck!' because all I could see was my debris coming towards my car," Heyworth said.

She said the tornado also shattered the glass of her patio table and cracked all her upstairs windows.

"I'm lucky because nobody got hurt," she said. "We're one of the lucky ones compared to the people who lost their homes."

In wake of the destruction, she said, community members came together to help clean up. They cleared what remained of her fallen fence off the roadway and removed half-fallen trees.

But still, the ordeal has left her shaken.

"All you could hear was this 'whoosh' and the intensity of the car, it was shaking. All I could see was the stuff flying and all I could think about was my kids, because they were screaming," she said.

Jane Laker was driving along Highway 11 when she heard the emergency alert on her phone, which she said she initially mistook for an Amber Alert.

"It was a crazy, crazy mess and at first we didn't understand what was going on until we started to see the debris," she said, noting they were essentially following behind the tornado, which was directly east of them.

"There are houses that are totally missing roofs, there was one car that was simply picked up and turned completely over in its laneway right where it was parked, there are sides of houses missing," she said.

Others shared photos and videos of the destruction in the aftermath of the tornado, showing homes with their roofs partially torn off, overturned vehicles and debris littering the streets.

Geoff Coulson, a warning preparedness meteorologist with Environment Canada, said those images and videos helped confirm the storm was indeed a tornado.

The tornado touched down around 2:30 p.m. just minutes after Environment Canada upgraded its tornado watch for the area to a warning, he said.

"We don't have a sense of the damage path, the length or width of the path" that the tornado took when it touched down in Barrie, he said, but the agency is sending a team to investigate, as is the Northern Tornadoes Project at Western University.

The storm also touched down in Keswick, Ont., but whether that was also a tornado remains to be determined, he said.

The tornado warning for Barrie was lifted shortly before 3 p.m. as the storm moved east. Severe thunderstorm warnings were in place in multiple communities along its path, however.

"It looks like, as it's moving further east, it will start to weaken somewhat, but it is still going to be a very dangerous storm for the next little while," Coulson said.

"It is also important to remind folks that it does continue to be an ongoing situation, (thunderstorm) watches continue to be in effect for much of southern and eastern Ontario, and there is still a potential for damaging storms to occur through the late afternoon and evening hours in parts of the province."

Premier Doug Ford was among those who offered up their sympathies to the affected residents.

"My thoughts are with everyone in #Barrie and #Innisfil affected by the severe weather today. A big thank you to our first responders that are currently on the ground helping the situation. Please stay safe everyone!," Ford said on Twitter.

Barrie was also hit by a devastating tornado in 1985, an F4-strength storm that killed eight people and destroyed hundreds of homes.

_ With files from Paola Loriggio and Holly McKenzie-Sutter in Toronto.

This report by The Canadian Press was first published on July 15, 2021.