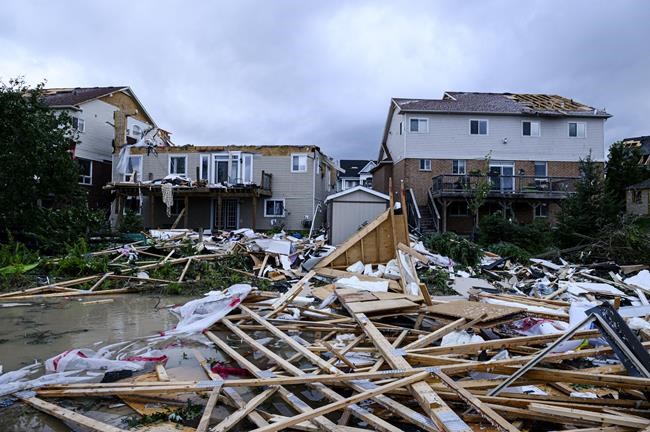 BARRIE, Ont. — Residents whose homes were seriously damaged in a twister that also injured several people in Barrie, Ont., were escorted back to retrieve key possessions Friday morning as the clean-up effort began.

Uprooted trees, toppled fences, pieces of building insulation and roofing materials remained strewn on lawns and into the streets in the southern neighbourhood where the tornado cut its path Thursday afternoon.

For some, the brief return home to fetch medication, prized possessions or pets highlighted the extent of the damage and its fallout, Barrie Mayor Jeff Lehman said in a video statement Friday morning.

"That's one of the real difficult things about this morning, is folks finding that their lives are gone, their possessions are gone or heavily damaged by the storm," he said.

"But the clean-up efforts are beginning."

Tyler Musgrove, his brother Jacob and their roommate Kelly Trinh were surveying what remained of their backyard Friday morning.

What used to be their shed was reduced to a wooden foundation and a pile of debris, and there was nothing left of their gazebo.

"This is the first time I'm seeing the damage," said Trinh, who had to stay with her boyfriend overnight because access to the home was blocked by the time she arrived Thursday evening.

"It does not feel real," she said.

Inside, the damage is "not that bad," Jacob Musgrove said. His window was broken by a two-by-four, which he's considering keeping as a memento, he said.

Tyler Musgrove said he and his brother were the only ones home when the tornado hit. He recalled running out to close the door to the shed, which had been left open, and suddenly seeing "stuff flying" all around him.

"The shed behind me started to break apart, it flew up and around me. Then I ran inside as fast as I could," he said.

He had to get stitches on his arm after getting cut up by glass and wood shrapnel, he said. His arm was bandaged up Friday morning.

Paramedics have said eight people were taken to hospital, and several others were treated for minor injuries. The mayor said Friday that 11 people were injured in total, and none were critically hurt.

Environment Canada has given the tornado a preliminary rating of EF-2, meaning it had maximum wind speeds of 210 kilometres per hour. The damage path was about five kilometres long and up to 100 metres wide, the weather office said.

Premier Doug Ford is heading to Barrie later Friday to survey the damage and meet with first responders and local officials.

Crews are expected to start making some repairs Friday, including patching up roofs that weren't too badly damaged.

Barrie police thanked everyone who has made donations to support those affected by the tornado, but said they can't accept any more at this time.

Lehman, the mayor, said the community has already started coming together to support those who lost the most to the tornado.

He noted it's a familiar scene to many long-time Barrie residents. A tornado killed eight people and injured more than a hundred others in the city in 1985. Hundreds of homes in the Allendale neighbourhood were destroyed.

"The scenes today are reminiscent of it," Lehman said. "I lived in that neighborhood as a boy. I mean, it's shocking, you know, you never expected to see it again."

Thursday's tornado brought back memories for 70-year-old Judy Arksey, too.

"It was like deja-vu," she said. "I got one look at the sky and I knew what was coming."

She was in her daughter's car in a driveway when the tornado ripped down the street. Her two grandkids — aged six and 16 — were with them.

"I remember the horses being lifted up out of the racetrack during the other tornado, and I thought, here goes our car with my grandkids in it," Arksey said.

As soon as she saw the sky, she said, she told them to look down so they wouldn't see what was coming for them. Luckily, she said, the car stayed on the ground despite taking a beating in the strong wind, and she and her family escaped injury.

She said the community has come together in the wake of yesterday's destruction, just like it did 36 years ago. Arksey spent two weeks volunteering after the 1985 tornado, she said, helping out however she could at the church.

This report by The Canadian Press was first published July 16, 2021.