On This Day in Canada’s Political History: Mackenzie King Dies at Kingsmere

No difficulty in picking today’s political history anniversary!  It was on this date in 1950 that William Lyon Mackenzie King passed into history at his beloved Kingsmere estate, just twenty minutes or so north of Ottawa.  Canada’s longest-serving, and many say greatest, Prime Minister was 75.

All told, Mr. King served six terms as Prime Minister of Canada between 1921 and 1949. This is a remarkable record of political longevity and one not likely to be repeated in modern times.  His political success is all the more fascinating when you consider that King was not charismatic and did not inspire the sort of love and loyalty enjoyed by previous Prime Ministers such as Sir Wilfrid Laurier and Sir John A. Macdonald.

Mackenzie King’s service to Canada continued following his passing and even to this day – he bequeathed his summer ‘retreat’, known as the Kingsmere Estate, to the Government of Canada.  The grounds include “The Farm”, which now serves as the official residence of the Speaker of the House of Commons (currently Nipissing-Timiskaming MP Anthony Rota). Most of the estate was incorporated into Gatineau Park, which is managed by the National Capital Commission.

To learn more about Mackenzie King’s life and distinguished career, I highly recommend visiting the Library and Archives Canada’s website devoted to the King Diary. You can find it here. 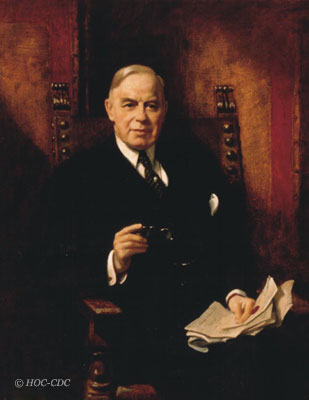