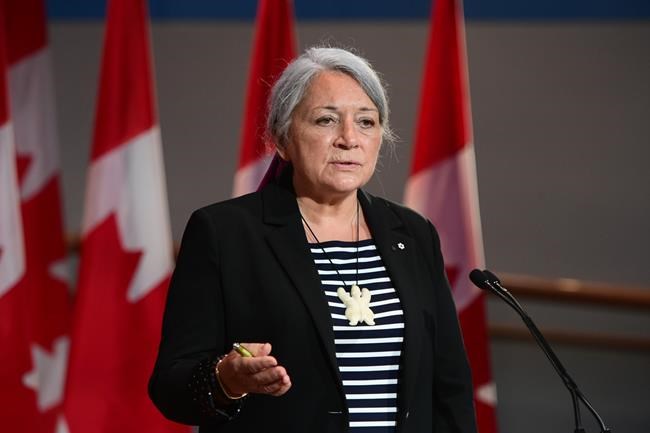 OTTAWA — Gov. Gen. Mary Simon says the country must find the humility necessary to create a more just society, vowing she will play her role as the country's new representative of the head of state.

As she took her seat at the head of the Senate chamber, her husband, Whit Fraser, turned to her, took a small bow and then sat down next to Simon.

Speaking shortly after officially taking on the role, Simon said she has heard from Canadians who have challenged her to bring a new and renewed purpose to her office to deal with challenges the country faces.

Her maiden speech touched on a number of themes, but she noted the need to rethink how Canadian view reconciliation with Indigenous Peoples.

She said reconciliation won't be completed through projects and providing services to Indigenous Peoples, but is rather a way of life that requires daily work and getting to know one another.

"To meet this moment as Governor General, I will strive to hold together the tension of the past with the promise of the future, in a wise and thoughtful way," she said in her speech.

"Our society must recognize together our moments of regret, alongside those that give us pride, because it creates space for healing, acceptance and the rebuilding of trust. I will strive to build bridges across the diverse backgrounds and cultures that reflect our great country’s uniqueness and promise."

Prime Minister Justin Trudeau named Simon, an Inuk leader and former Canadian diplomat, as his choice to be the Queen's representative in Canada earlier this month, replacing Julie Payette who resigned in January.

Her choice came amid a national reckoning with the country's historical mistreatment of Indigenous Peoples, including horrific findings of unmarked graves at the sites of former residential schools.

"Clearly, this signals a further step on the path toward reconciliation, with the Indigenous Peoples of Canada starting to find our rightful place in Confederation," said David Chartrand, president of the Manitoba Métis Federation, in a statement on Simon's installation.

Trudeau said in a statement that he expects Simon to help the country confront difficult truths about the past, and walk the shared path of reconciliation.

He also said Simon will use her unique experiences to represent Canadians in all their diversity, at home and abroad, and in both official languages.

Trudeau was among the 44 people allowed to witness the ceremony in person as public health guidelines set limits on attendance and mask requirements for all in the chamber.

Despite requests from officials that people avoid gathering, a crowd of people stood across the street, awaiting Simon's arrival for the ceremony.

When she stepped on to the red carpet, the crowd began clapping and cheering. As the cheering quieted, someone in the crowd yelled, "down with the monarchy," before adding, "free yourselves."

She then turned to a First Nations drumming circle, nodding her head ever so slightly to the beat, before heading inside and being accompanied by a traditional Inuit drummer on her way into the Senate chamber.

Inside the chamber, a traditional Inuit oil lamp remained lit during the ceremony.

This report by The Canadian Press was first published July 26, 2021.